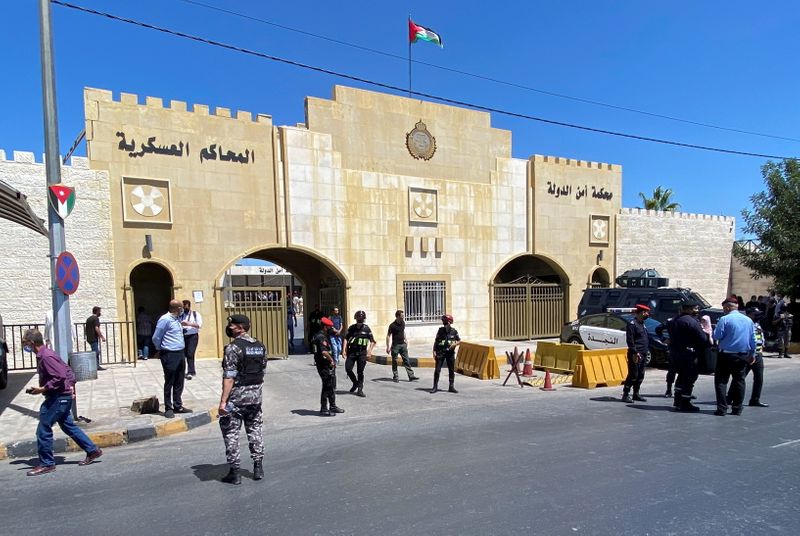 Security members stand guard outside a court that sentenced a former royal confidant, Bassem Awadallah, alongside a minor royal to 15 years in jail on charges of attempting to destabilize the monarchy, in Amman, Jordan July 12, 2021. REUTERS/Muath Freij

AMMAN (Reuters) -A Jordanian court on Monday sentenced a former royal confidant, Bassem Awadallah, and a minor royal to 15 years in jail on charges of attempting to destabilise the monarchy.

The court said it had confirmed evidence backing the charges against Awadallah, once a confidant of King Abdallah, and Sherif Hassan Zaid, and that they had been determined to harm the monarchy by pushing former heir to the throne Prince Hamza as an alternative to the king.

Both men had pleaded not guilty.

Here is what we know about a case that exposed faultlines in Jordan’s royal family.

The court’s dismissal of a defence request to call witnesses, including Hamza, speeded up the trial.

The sentence can be appealed in a higher court.

Hamza, the half-brother of King Abdullah, avoided punishment after pledging allegiance to the king, defusing the crisis that had led to his house arrest.

Legal experts have questioned the legality of a trial when the man at the centre of the case, Hamza, was not in the dock. The authorities have said the trial process was fair.

The family of Awadallah, a U.S. citizen, who have appointed former U.S. federal prosecutor Michael Sullivan to represent them, have said the former royal official was tortured and feared for his life.

Sullivan said after the verdict that Awadallah was denied a fair trial in secret proceedings that “saw an absolute denial of any transparency” where he faced physical abuse, deprivations, and horrific threats and fabricated confessions.

Jordan’s public prosecutions office said Awadallah was at no point threatened or tortured, nor did he make his testimony under coercion,

Much of the prosecution case was based on intercepted internet messaging, that have now been leaked on social media.

Reuters has not been able to verify the authenticity of the messages independently. They purportedly expose conversations between Hassan and Hamza in March, when the country saw a wave of protests over economic hardships.

Awadallah – a Jordanian of Palestinian origin drawn from outside the traditional palace entourage, whose liberal economic reforms challenged the tribal establishment – allegedly advised Hamza on critical tweets the prince wanted to send to further his ambitions.

The messages show an English-speaking Hamza deliberating on what steps to take.

“What I need is some advice right now, these decisions need well thought out responses,” he says in one conversation.

Awadallah counselled him against publishing a draft tweet saying Jordan was on the verge of a “revolt of the poor”, since this could raise suspicion and make it impossible to keep their activities secret.

In other messages, Hassan raises Hamza’s morale by passing on messages from Awadallah.

Authorities say the recordings are evidence of how Hamza was exploiting popular anger against the state. They say the suspects prodded Hamza to step up his agitation among disgruntled members of powerful tribes that traditionally support the monarchy.

Awadallah, who challenged a conservative establishment opposed to his liberal policies and has close ties to senior U.S. officials, promised to lobby on Hamza’s behalf in Western capitals and Saudi Arabia, the prosecution charged.

Hamza asked Awadallah: “If something happens to me in Jordan would the Saudi officials come to my help?”, according to a copy of the charge sheet leaked to pro-government news portals.

Officials say they halted what could have developed into a foreign-inspired plot. They also say Awadallah tried to get Hamza to weaken King Abdullah’s resistance to a Middle East peace plan unveiled by former U.S. President Donald Trump.

But Hamza showed no interest in that topic and focused only on his aspirations to the throne, officials say.