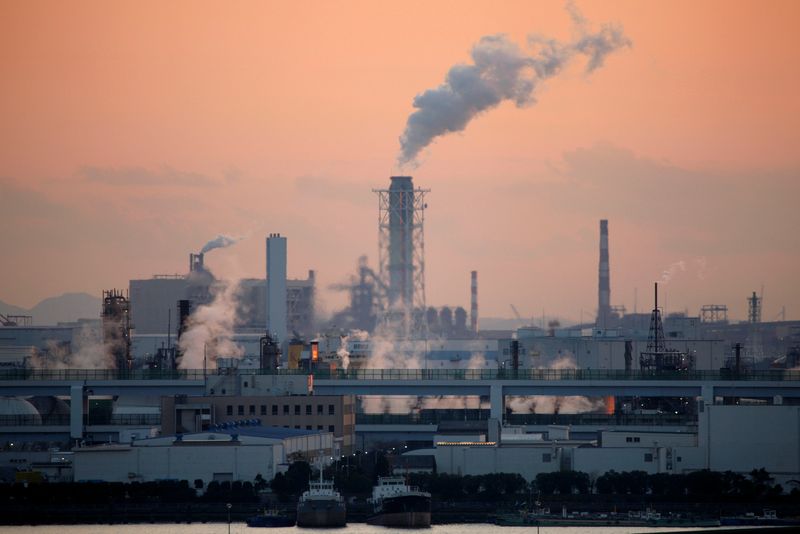 By Yoshifumi Takemoto and Yuka Obayashi

TOKYO (Reuters) -Japan on Thursday nearly doubled its target for cutting carbon emissions, responding to pressure from the United States and some of its own companies as world leaders met for a climate summit hosted by U.S. President Joe Biden.

Prime Minister Yoshihide Suga said Japan would aim for a 46% cut by 2030 and look for ways to go even further. Its previous target was a 26% reduction from 2013 levels, a goal that activists had branded unambitious.

Other countries also announced stronger action in the lead-up to the virtual summit, with Britain pledging a 78% reduction by 2035.

Washington, which announced its own plan to halve emissions as it opened the meeting, is seeking to reclaim global leadership in the fight against global warming after former President Donald Trump withdrew from international efforts.

Japan, the world’s fifth-biggest carbon emitter, had been under pressure from the Biden administration to set a 50% target, according to sources familiar with discussions held before and during a visit by Suga to Washington last weekend.

Suga said that achieving the new target would not be easy but he would instruct ministers to accelerate plans. “We will continue trying for an even higher cut of 50 percent,” he added.

UN climate scientists say the world’s net CO2 emissions must fall to zero by 2050, to limit the rise in global temperatures to no more than 1.5 degrees Celsius compared with pre-industrial levels. Exceeding that amount of warming would unleash the most severe impacts of climate change.

Late last year, Suga set a goal for carbon neutrality by 2050, bringing Japan more into line with some other countries at the time.

The government is also reviewing energy policy this year and has indicated it will aim for lower use of carbon-emitting fossil fuels in the electricity mix.

However, it has so far – to heavy criticism – kept up support for coal due to the slow restart of reactors after the Fukushima nuclear disaster in 2011 led to their shutdown.

“All eyes will now be on the pending revision of the Strategic Energy Plan, with huge parts of corporate Japan urging for a target of 50% or more renewables by 2030,” Dylan Tanner, executive director of InfluenceMap, a London-based data analysis company, told Reuters.

“Such a number would kick-start both regulatory reform and investment in Japan’s power sector in line with global trends towards solar and wind,” he added.

Aeon Co., Asia’s largest retailer, Fujitsu, Ricoh Co. and other companies last year demanded Japan’s government speed up a shift to renewable energy and a zero carbon economy in the recovery from the COVID-19 pandemic.

But Japan’s motor industry sounded a note of caution on Thursday.

“What Japan needs to do now is to expand its options for technology,” said Akio Toyoda, president of Toyota Motor speaking in his capacity as head of Japan’s automobile manufacturers association.

“Policy that bans gasoline-powered or diesel cars from the very beginning would limit such options, and could also cause Japan to lose its strengths,” he told a regular press briefing.

Japan’s powerful business lobby, Keidanren, is dominated by energy-intensive sectors that represent less than 10% of the economy, an InfluenceMap study last year said.

Such lobbying has resulted in national policies that favour coal and hindered attempts to combat climate change, the study said – an assertion dismissed by Keidanren.