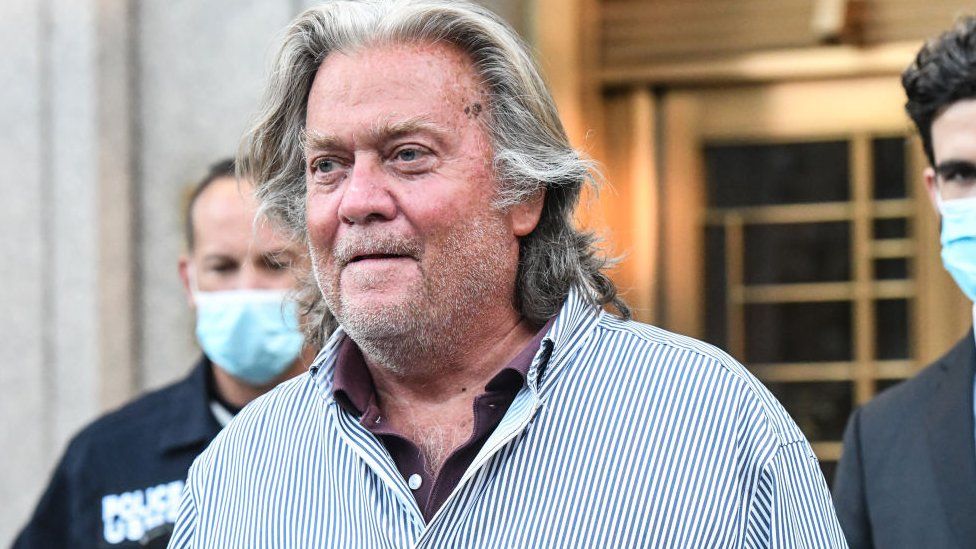 The House select committee investigating the Capitol insurrection is sending an aggressive message to Donald Trump’s onetime political guru — and to the former President himself.

But by moving forward to hold Steve Bannon, the architect of Trump’s nationalist populism, in criminal contempt for refusing to comply with a subpoena, the panel may be providing the mastermind of Trump’s blow-it-all-up strategy yet another platform to try to tear down America’s institutions.

Action that will unfold next week against the ex-President’s ideological soul mate is intended as a warning sign to those in Trump’s wider orbit. And the chairman of the January 6 committee, Democratic Rep. Bennie Thompson, warned on CNN that no one is “off limits” in terms of being compelled to testify — including Trump himself.

The panel is determined to use every method possible to find the truth about the lead-up to a pro-Trump mob storming the Capitol on January 6. But the committee’s efforts may also end up emphasizing a dark truth revealed by Trump’s time in power — which is an increasing threat for the future, too, as he relentlessly attacks US democratic institutions ahead of a possible 2024 White House bid. Attempts to hold the former President’s inner circle accountable often fall short and end up having the unintended effect of further politicizing the vital institutions of government — a core goal of Trumpism and one long embodied by Bannon.

This committee’s effort will face exactly the same kind of obstruction and intransigence as previous investigations of the former commander in chief meant to subject him to the checks and balances of the US constitutional system.

If so, he will prove again that once-powerful figures who resolve to defy normal guardrails of political behavior — and in Trump’s case, the rule of law itself — often find they can operate with a degree of impunity. For Trump, for instance, even the historic stain of two impeachments turned out to be no deterrent to aberrant behavior and abuses of power — a reality that raises questions about the Constitution’s resilience against presidents with autocratic tendencies.
At the very least, this latest clash between Trump and the norms that have long governed US political life underscores how desperate the ex-President is, for whatever reason, to conceal what really happened on January 6. And while he is trying to obscure the truth about what happened in the last election, his conduct is offering a foreboding preview of how he might act in a second term, if he were to win the 2024 election.

The Democratic-led panel wants to find out what Bannon and others around Trump were telling him before he incited a mob to invade the Capitol on the basis of his election fraud lies. There is no suggestion at this point that Bannon committed a crime. But his claim that his reported contacts with Trump earlier this year are covered by executive privilege — which allows a president to receive confidential advice from subordinates — is seen by many legal scholars as spurious since Bannon, fired as a White House adviser in 2017, had no government job under Trump at the time. The tactic, therefore, comes across as an attempt to obstruct a legally constituted congressional probe into one of the worst attacks on democracy in US history.

As an example of how Trump will try to politicize the latest twist in the January 6 story, the ex-President put out a statement on Thursday demanding that the “Un-Select commitee” should “hold themselves in criminal contempt for cheating in the election” and accused prosecutors of trying to destroy half the country. He added, “The people are not going to stand for it.” So more than six months on, the ex-President is using new attempts to hold him to account as an opportunity for further incitement.

Throughout Trump’s term, the White House resisted Congress’ oversight role and requests for documents and testimony at almost every turn. In the past, some administrations and political leaders have often sought to reach accommodations with investigations like the January 6 committee — one reason why criminal referrals have been comparatively rare in recent times. But that’s hardly Trump’s style. He showed as a businessman and celebrity even before entering politics that he would push convention and the rule of law to a breaking point.

“What we have seen in the past few years is just complete thumbing of the nose at Congress’ subpoena power,” said Kim Wehle, a professor at the University of Baltimore School of Law, on CNN’s “Newsroom” on Thursday.

As well as being an echo of the excesses of the previous administration, the fact that Bannon is going along with what appears to be a weak executive privilege argument made by Trump’s lawyers contains a warning for the future about even more autocratic behavior if the former President is able to get behind the Oval Office desk again.

Which is why the January 6 committee doesn’t have much time to act. What is likely to be a prolonged and possibly inconclusive legal battle with Bannon could stretch right up until the midterm elections, when a possible new GOP House majority in January 2023 could just shut down the investigation before it has the chance to ink an official record for history on the outrage of January 6. As such, Bannon’s strategy looks a lot like an attempt to run out the clock.

A case against Bannon could take ‘years’

The House select committee is due to meet on Tuesday evening to begin the process of making the referral, which will require a full House vote. It then goes to the US attorney for the District of Columbia to consider next steps. Given the deeply political nature of the case, it will almost certainly fall to US Attorney General Merrick Garland to decide whether to pursue a criminal case against Bannon.

Stanley Brand, a former general counsel to the House of Representatives, said on CNN’s “Newsroom” on Thursday that the process ahead was strewn with obstacles and was not guaranteed to produce the result the committee is hoping for.

“The history of this is not all that easy for the Congress,” said Brand, who was general counsel for the House in 1983, the last time that it referred a criminal contempt case to the Justice Department.

“And while they can, in a sense, huff and puff, until they get a conviction and a final judgment, it could be years,” said Brand.

Thompson, the Mississippi Democrat who chairs the January 6 select committee, made clear that his panel, which includes two Republicans, is trying to make an example of Bannon in taking the comparatively rare step of making a criminal referral to the Justice Department.

“We think Steve Bannon has information that is germane to what happened on January 6,” Thompson told CNN’s Wolf Blitzer on “The Situation Room.”

“If he refuses the subpoena like we expect him to continue to do, we are left with no other choice than to ask the Justice Department to lock him up and hold him in contempt. Clearly, that might send enough of a message that he will agree to talk to us.”

Asked whether the committee could subpoena Trump, Thompson answered: “Nobody is off limits.”

Bannon’s resistance does not render the committee toothless. Several other Trump acolytes, including ex-White House chief of staff Mark Meadows and former Pentagon official Kash Patel, are “engaging” with the committee — and the panel agreed to short postponements of their appearances — though it remains unclear if that contact amounts to any form of cooperation.

They may find the prospect of a criminal referral more troublesome — even though Trump’s lawyers have already claimed their deliberations with him are covered by executive privilege. And the committee has already heard from former acting Attorney General Jeffrey Rosen, who served in the tumultuous final days of the Trump administration as the then-President sought to thwart Joe Biden’s presidential election victory across multiple fronts.

But even as the committee pushes ahead, time will be ticking down to the midterm elections in November 2022, which could spell the probe’s eventual demise. Multiple lengthy legal actions like one involving Bannon could still hamper its ability to get all the facts.

According to Wehle, the law professor, that would be a “tragedy for a democracy itself and the American people, frankly.”