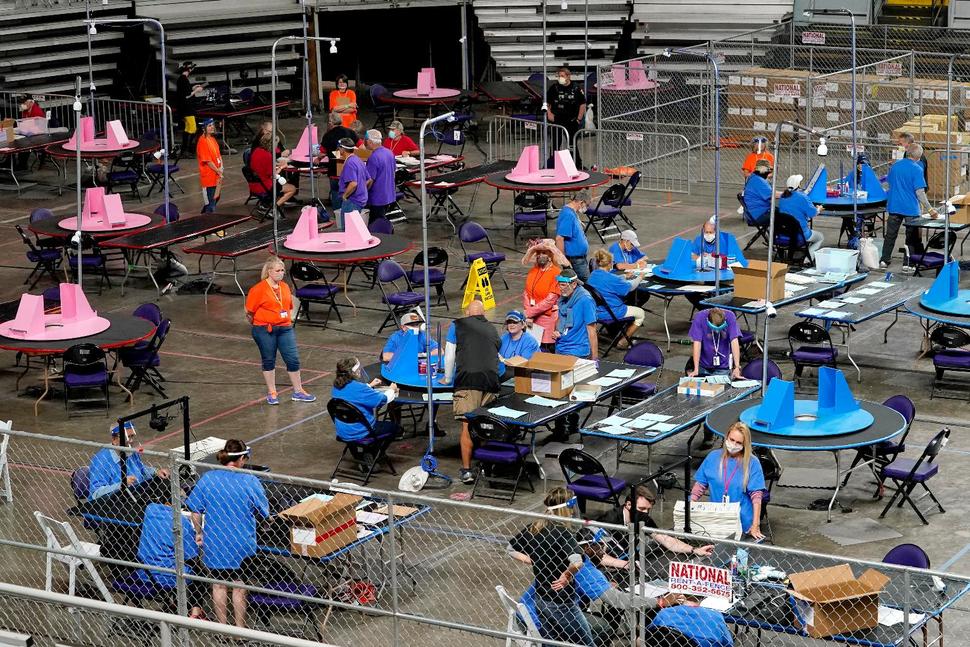 People who believe debunked conspiracy theories about the 2020 election are pushing for audits of ballots and voting machines in an increasing number of states.

A Georgia judge last week awarded a group the chance to review mail ballots in a large Georgia county that includes Atlanta. Officials in a rural Michigan county have expressed interest in a review of their voting machines. A similar debate has caused sharp divisions in a New Hampshire town. In some cases, the efforts have been inspired by an audit of the votes in Arizona’s Maricopa County, an elaborate exercise engineered by the GOP-led state Senate.

The efforts are unlikely to yield any new revelations about President Joe Biden’s victory in the 2020 election. The votes have been counted — and often recounted — and certified by local officials. Still, the lingering debate and legal wrangling have propelled suspicions and advanced debunked theories. And their sometimes misleading conclusions have been amplified by Trump, whose false allegations of election fraud sparked the push.

The profusion of audits alarms election experts, who note that the Arizona audit has set a troubling new precedent of third-party, partisan review of the ballots, long after elections are over.

“This is bad enough to see it happen once,” said Eddie Perez, an expert on voting systems at the OSET Institute, said of Arizona, but seeing it elsewhere in the country is “dangerous for democracy.’”

The audits are serving a clear political purpose in firing up the Republican Party’s base. At a rally outside Phoenix last week featuring GOP Reps. Matt Gaetz and Marjorie Taylor Greene, references to the Arizona audit drew much more enthusiastic applause than even immigration, normally the top hot-button issue on the right in the border state.

In a statement Monday night, Trump criticized Republican Party leaders for not doing more about “what went on” in November. He cited the ballot reviews underway and promised “more to follow.”

The Arizona audit has been cited as a template for the others, although each is distinct. In Arizona, the Republican-controlled state Senate subpoenaed more than 2 million ballots and voting machines from Arizona’s most populous county, which includes Phoenix, and gave control of the review to a small cybersecurity firm whose founder, Doug Logan, had tweeted pro-Trump election conspiracies.

Logan has ties to the Michigan effort as well. In April, Logan and another cybersecurity expert involved in the Arizona audit, Ben Cotton, filed separate expert witness reports alleging security problems in voting machines in a lawsuit filed in rural Antrim County, Michigan, that sought to compel a statewide election audit there. That case was dismissed by a judge last week — one of more than 60 court losses for pro-Trump groups in lawsuits challenging the 2020 election.

But Logan’s and Cotton’s claims were used by a Michigan attorney to bolster the case for a “forensic audit” of voting machines in rural Cheboygan County, in northern Michigan, earlier this month.

“If you don’t have your vote counted as it was intended to count, we don’t have a free country,” attorney Stefanie Lambert, who had filed an appeal of the dismissal of a separate, unsuccessful lawsuit challenging Trump’s loss in Michigan, told the Cheboygan County elections committee. She offered to provide auditors free of charge.

Arizona has also inspired calls by pro-Trump groups to push for their own pick to take over a post-election audit of a statehouse race in Windham, New Hampshire — home of former Trump campaign manager Corey Lewandowski.

But the biggest new entry into the audit field is in Georgia’s Fulton County, where a judge on Friday ruled that plaintiffs could inspect 147,000 mail ballots as part of their lawsuit alleging fraud in the most populous county in the state.

The lawsuit was spearheaded by Garland Favorito, a longtime skeptic of Georgia’s voting systems who has embraced conspiracy theories about 9/11, Clinton-era scandal and Supreme Court justices. Favorito says he voted for Don Blankenship, the U.S. Constitution Party candidate, last year.

“Our ultimate objective is the truth. What is the truth of this election?” Favorito said in an interview. “Don’t tell us what the results are and then hide it from us and pretend we have to accept whatever you tell us.”

Fulton County Chairman Robb Pitts said in a statement: “It is outrageous that Fulton County continues to be a target of those who cannot accept the results from last year’s election. The votes have been counted multiple times, including a hand recount, and no evidence of fraud has been found.”

Both sides are scheduled to meet Friday to discuss how to review the mail ballots. Favorito said Jovan Pulitzer, an inventor and key figure in the pro-Trump movement to overturn the 2020 election, may be one of the people he consults for the ballot examination.

Pulitzer had pushed unsuccessfully for a statewide audit of Georgia’s election results, even after two recounts by the Republican secretary of state confirmed that Biden won the state. That finding infuriated Trump, who has slammed both Secretary of State Brad Raffensperger and the state’s Republican governor, Brian Kemp.

Former state Rep. Vernon Jones, a Trump backer who is challenging Kemp in the GOP primary, held a news conference outside the state Capitol last week to hammer the governor for not commissioning a statewide audit. “There’s a dead cat on the end of this line, and we just want to find out what it is, that’s all,” Jones said. “People have a right to know. What are you hiding?”

That’s the sort of sentiment that alarms Tammy Patrick, who used to oversee post-election audits in Maricopa County. Those examinations are essential, she argued, but must be done by election experts, not ideologically interested novices, and should be completed soon after voting.

“In a healthy democracy, you have a an auditing process, you have legal recourse, and when that period is over, all the candidates who have won take over and you move on,” said Patrick, an adviser at The Democracy Fund, adding that the people calling for audits clearly want only one result.

“They are not going to be satisfied,” Patrick said. “This is just going to play out in perpetuity.”

Brumback reported from Atlanta and Riccardi from Denver. Jeff Amy in Atlanta and Jonathan J. Cooper in Phoenix contributed to this report.