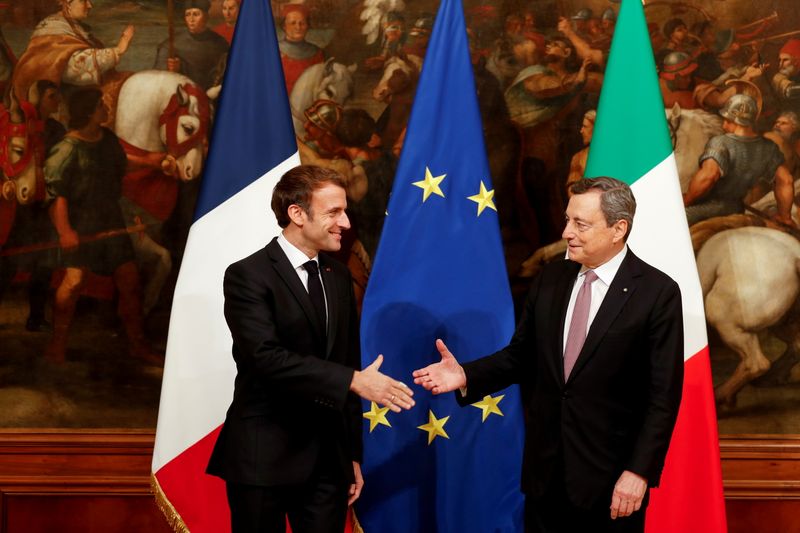 ROME (Reuters) -Italy and France signed a treaty on Friday to strengthen bilateral ties and reinforce their coordination within Europe, at a time when EU diplomacy is being tested by the departure of Germany’s Angela Merkel.

Italian Prime Minister Mario Draghi and French President Emmanuel Macron put their names to the new pact in Rome’s Quirinale Palace. Afterwards, a formation of planes trailing smoke in the colours of the two nations, sped through a stormy sky.

“The treaty … marks an historic moment in relations between our two countries. France and Italy are further consolidating our diplomatic, commercial, political and cultural ties,” Draghi told reporters.

The signing ceremony comes shortly after a new coalition pact was agreed in Germany, ending 16 years of rule by Merkel, who was the undisputed leader of Europe and forged especially close ties with successive French leaders.

The new Berlin administration is expected to be more inward looking, especially at the start of its mandate, and both Paris and Rome are keen to deepen relations in a period clouded by economic uncertainty, the pandemic, a more assertive Russia, a rising China and a more disengaged United States.

Macron said the Quiranale Treaty, named for the Roman residence of the Italian president, did not challenge French relations with Germany, but was complementary and aimed at boosting all of Europe.

“The objective we are following … is to have a stronger and more sovereign Europe … A Europe that knows how to protect its borders and defend itself,” Macron said.

The treaty was originally envisaged in 2017, but negotiations ground to a halt in 2018 when a populist government took office in Rome and clashed repeatedly with Macron over immigration.

There has been a renaissance this year following the appointment of Draghi to lead an Italian unity government, and the two men have met repeatedly in recent months, working closely on areas that were previous flashpoints, such as efforts to end years of conflict in Libya.

The Quirinale Treaty, loosely modelled on a 1963 Franco-German pact, will lead to Paris and Rome seeking common ground ahead of EU summits, just as France already coordinates key European policy moves with Germany.

Draghi said the two nations would launch “new forms of cooperation” in energy, technology, research and innovation. He added that at least once every quarter, an Italian minister would attend a French cabinet meeting, and vice versa.

French companies have invested heavily in Italy in recent years, but Italian politicians have accused Paris of being less forthcoming when Italian businesses seek cross-border deals.

Italian officials suspected Paris actively sought to undermine the deal behind the scenes.

(Additional reporting by Angelo Amante in Rome and Elizabeth Pineau and Ingrid Melander in Paris; Editing by Gareth Jones and Peter Graff)