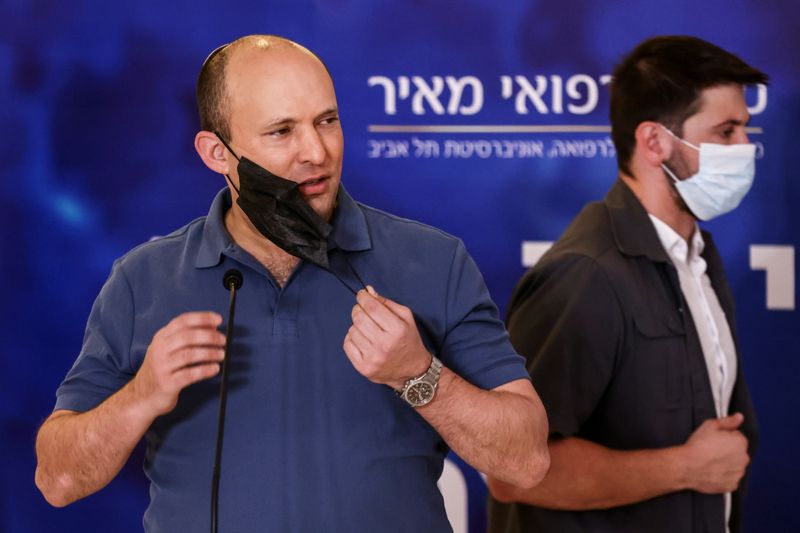 JERUSALEM (Reuters) – Israeli Prime Minister Naftali Bennett and senior aides holed up in a nuclear command bunker on Thursday to simulate an outbreak of a vaccine-resistant COVID-19 variant to which children are vulnerable, describing such an eventuality as “the next war”.

Israel would brief foreign leaders next week on the findings of the drill, he said, citing Britain’s Boris Johnson as among counterparts with whom he is in contact.

Bennett said that, to enhance the challenge of the one-day exercise, he had been kept unaware of specific scenarios of an imagined 10-week crisis that starts over the December holidays.

“What I’ve learned is if you prepare for the next war and not for the previous war, the next pandemic and not the previous pandemic, that means that you are going to be better prepared,” Bennett told Reuters from the facility in the Jerusalem hills.

As part of the simulation, Bennett said he had ordered Israeli children – including his own four – confined to their homes while the government sealed off the borders and conferred with the Palestinian Authority, Gaza officials and Jordan.

“Unlike a war-wargame, a pandemic wargame is not secret. Quite the contrary, we want to share the information,” he said.

Israel built the bunker, known as the “National Management Centre”, more than a decade ago because of concern about Iran’s nuclear programme and missile exchanges with Lebanon and Gaza.

Bennett said he and his aides could manage Israel “indefinitely” from the bunker in any major crisis.