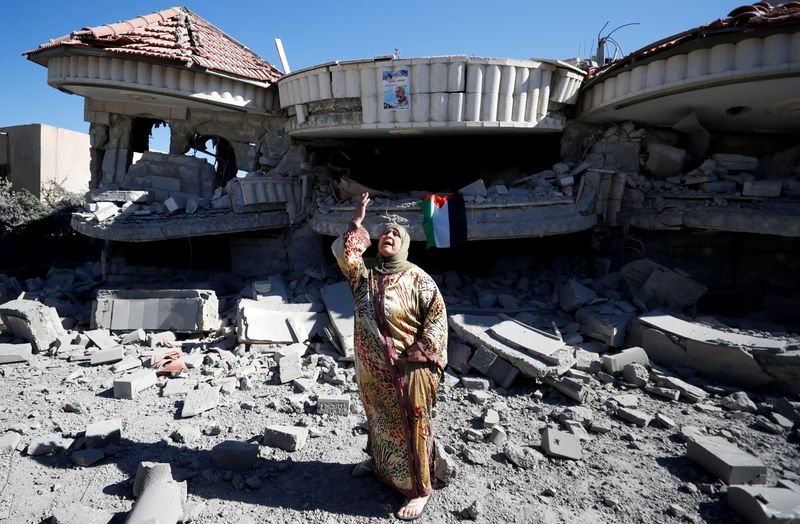 A woman gestures next to the house of jailed Palestinian assailant Muntasir Al-Shalabi, after it was blown up by Israeli forces, in Turmus Aya, near Ramallah in the Israeli-occupied West Bank July 8, 2021. REUTERS/Mohamad Torokman

TURMUS AYYA, West Bank (Reuters) – Israel drew U.S. criticism on Thursday when it destroyed the family home of a Palestinian-American accused of involvement in a shooting that killed an Israeli and wounded two others in the occupied West Bank.

Muntasir Shalabi was indicted in an Israeli military court over the attack in May near the city of Nablus in which student Yehuda Guetta was shot dead.

After an appeal in an Israeli court by Shalabi’s family against the demolition was unsuccessful, the military said, the villa in Turmus Ayya, a village in which many Palestinian-Americans live, was levelled in a controlled explosion.

In a statement after the home was destroyed, the U.S. Embassy in Jerusalem called on “all parties to refrain from unilateral steps that exacerbate tensions and undercut efforts to advance a negotiated two-state solution” of the Israeli-Palestinian conflict.

“This certainly includes the punitive demolition of Palestinian homes,” a spokesperson said. “As we stated numerous times, the home of an entire family should not be demolished for the actions of one individual.”

U.S. criticism of Israeli policy towards the Palestinians was rare during the presidency of Donald Trump, who embraced Israel’s settlements – seen by many countries as illegal – in the West Bank. U.S. President Joe Biden has sought to rebuild relations with the Palestinians.

Shalabi’s wife, Sanaa, who lived with three of their children in the home in Turmus Ayya, said she spoke with her husband by telephone on Thursday. She described him as a “resister” and vowed to rebuild the house.

“They want to demoralise us, but we are steadfast. This is the situation of the entire Palestinian people,” she said.

Israel captured the West Bank, along with Gaza and East Jerusalem, in a 1967 war. Palestinians seek the territories for a future state.