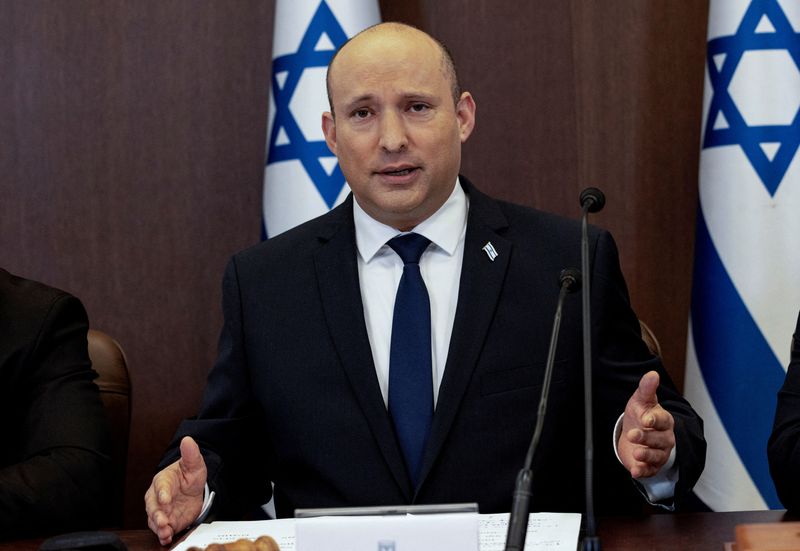 JERUSALEM (Reuters) – Israel is accelerating the roll-out of laser-based interceptors as part of a plan to surround itself with such technologies and reduce the high costs currently incurred when shooting down aerial threats, Prime Minister Naftali Bennett said on Tuesday.

Lifting the veil on prototype interceptors that would use lasers to super-heat incoming drones or the kinds of rockets favoured by Iran-backed guerrillas, Israeli defence officials predicted last June such systems would be ready for action in 2025.

“Within a year already the IDF (Israel Defence Forces) will bring into action a laser-based interception system, first experimentally, and later operationally, first in the south, then in other places,” he said in a speech.

Gaza, from which Hamas and other militant groups have regularly shelled Israeli border towns, is to the south.

“And this will enable us, as the years advance, to surround Israel with a wall of lasers which will protect us from missiles, rockets, UAVs and other threats,” he told Tel Aviv University’s Institute for National Security Studies.

Bennett was speaking about Israel’s efforts to counter what it sees as Iranian efforts to encircle it with guerrillas capable of paralyzing its infrastructure with relatively inexpensive barrages.

The laser system would be an addition to Israel’s current air defences based on Iron Dome, David’s Sling and Arrow – systems that launch interceptor missiles costing tens of thousands of dollars to millions of dollars each.

“The equation will be overturned – they will invest much, and we little,” Bennett said.

“If we can intercept a missile or rocket with an electrical pulse that costs a few dollars, we will essentially neutralize the ring of fire that Iran has set up … This new generation of air defence can also serve our friends in the region, who are also exposed to grave threats from Iran and its proxies.