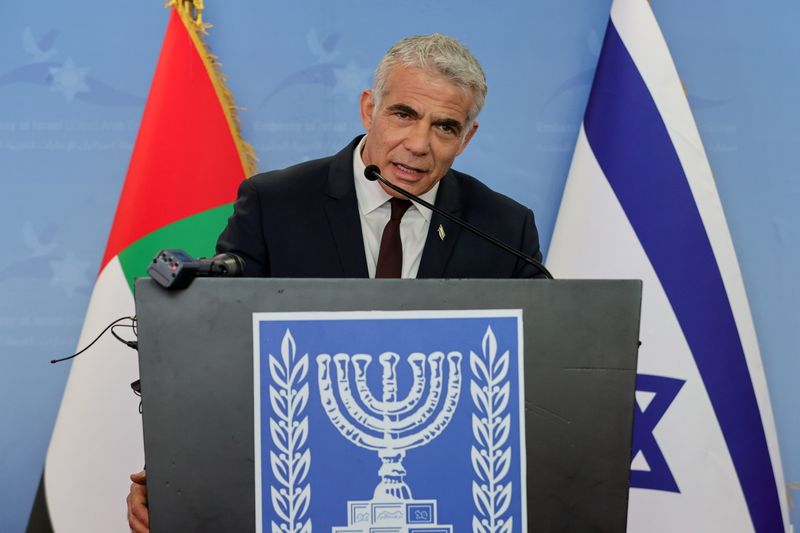 DUBAI (Reuters) – Israel’s foreign minister said on Wednesday his visit to the United Arab Emirates was just the start of a road to peace with other Middle East countries, signalling an offer of friendship with Arab states still wary of normalising ties.

The trip comes amid unease in Israel and Arab capitals about U.S. efforts to re-enter a 2015 nuclear pact between Iran and world powers, which then President Donald Trump quit in 2018 in a move backed by Saudi Arabia and its Gulf allies.

“This visit isn’t the end of the road to peace, it is just the beginning,” he told reporters. “Our hand is outstretched… I hope this visit is the first of many and that together with our new friends we continue to make history in the entire region.”

The UAE and Bahrain normalised ties with Israel under so-called “Abraham Accords” brokered by Trump’s administration, creating a new regional dynamic based on mutual concern over Iran and Islamist groups. Sudan and Morocco followed suit.

The agreements in effect challenged a decades-old allegiance to the Palestinian issue as a major driver of Arab policy.

Lapid declined to comment on whether Israel was coordinating with Gulf states over Iran, saying he did not want to “embarrass” his hosts by remarking on a neighbour while in the UAE, but noted his country was worried about the nuclear deal.

“What we need to do is to make sure that what we are going to have on Iran is a good agreement,” he said, adding that Israel was discussing the matter with the United States.

Gulf states have called for a stronger deal of longer duration that also addresses Tehran’s missiles programme and support for regional proxies.

The Vienna talks aim to bring Iran and the United States back into full compliance with the pact that placed restrictions on Tehran’s nuclear activities in exchange for lifting international sanctions. Trump had reimposed harsh U.S. sanctions and Iran responded by violating many restrictions.

During his two-day visit Lapid inaugurated Israel’s temporary embassy in Abu Dhabi and consulate in Dubai, where he toured his country’s pavilion at the Expo 2020 site where the emirate will host the world fair starting October.

The Abraham Accords have also been billed by the signatories as an economic boon, and on Wednesday Israel and the UAE said they had started talks on a free trade agreement, according to a joint statement carried on state news agency WAM. The UAE and Israel have previously signed agreements for tourism, investment and cooperation in fields from energy to technology.

Lapid said he expected more deals to be inked between Israel and the UAE which would demonstrate what happens when countries choose cooperation over conflict.

While opening the Dubai consulate, he hailed “the ability to cooperate. To find good partners and work together with them. To connect intelligence to intelligence, ambition to ambition.”