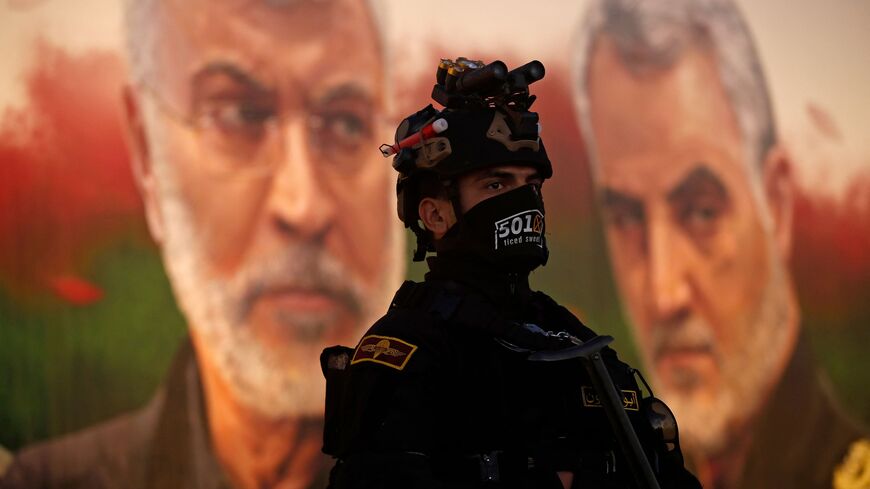 Share
Tweet
Share
Share
Email
Comments
The PMU had set up a monument of Qassim Soleimani and Abo Mahdi Mohandas on Baghdad’s airport boulevard this year, something that the former Iraqi government had blocked

Soleimani and Muhandis were killed in a drone strike by US forces near Baghdad airport on Jan. 3, 2020.

While the PMU organizes a demonstration each year on the anniversary of the incident, this year it is promising a larger rally. About a dozen Iraqi provinces — including Baghdad, Basra and even the Sunni dominated province of Saladin — have announced a public holiday for the day to allow public servants to attend the ceremony.

The PMU set up a monument with busts of Soleimani and Muhandis on Baghdad’s airport boulevard this year. The monument was placed last week on the spot of the strike near Baghdad International Airport. Photos of the monument were circulated widely on Iraqi social media.

Airport boulevard is considered part of Baghdad’s international zone, which is used by government officials and foreign diplomats, with limited access for ordinary citizens.

On the eve of the anniversary, footage shared on pro-Iranian media via Telegram showed members of those military factions and their sympathizers blocking the airport road.

On Monday, a balloon with Soleimani and Muhandis’ images was seen floating in Baghdad at a close distance from the US embassy, bearing the text: “Blood for Blood.”

Last week, photos of Soleimani and Muhandis were spread widely in Tahrir Square in central Baghdad and around the Monument to the Unknown Soldier in Baghdad.

In conjunction with the preparations for the third anniversary rally, leaders of the pro-Iranian movement released a public announcement threatening to fight the US military staff in Iraq until they all leave the country.

Head of Kataib Hezbollah Abu Hussein Mohammadi reportedly threatened to expel US forces from the entirety of west Asia.

A relatively unknown militia called Ahrar al-Iraq also warned that US military staff will be targeted anywhere in Iraq.

During the last two years, the previous government of Mustafa al-Kadhimi resisted calls to set up a monument for the two figures on the airport boulevard.

This year, however, the anniversary is taking place under the new government of Prime Minister Mohammed Shia al-Sudani which was formed by a majority of the Coordination Framework, the Iran-backed military factions and political groups.

“It is necessary to remember the leaders of victory and their heroism in confronting the most powerful terrorist group known to history,” he said, while criticizing the US for “targeting them in an act condemnable by all international norms and laws.”

Prior to the anniversary, leaders of the resistance movement such as Badr Organization’s Hadi Amiri and Asa’ib Ahl al-Haq’s Qais Khazali called for economic independence from the United States, as well as ending the US occupation in Iraq. They are now accusing Washington, without any evidence, of being involved in the currency crisis in Iraq.

Pro-Iran militias in Iraq are, however, accused of smuggling US dollars to Iran, Syria and Lebanon in order to help their allies there deal with the economic crisis.