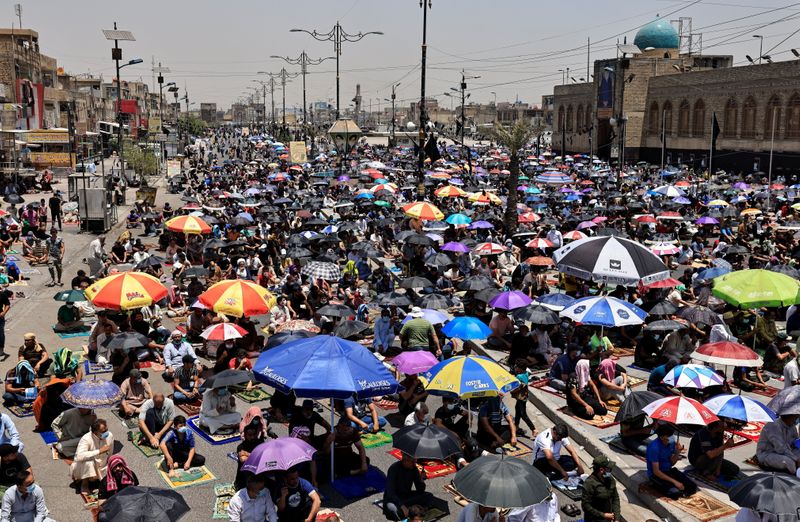 BAGHDAD (Reuters) – Hundreds of Iraqis protested in Baghdad on Friday over worsening power and water cuts as temperatures exceeded 50 degrees Celsius in some parts of Iraq.

At Friday prayer in the Sadr City district of Baghdad, men sweated and prayed under parasols, then held a protest criticizing the government for not providing its citizens with enough electricity.

“It’s just getting worse. We can take power cuts, even 10 hours of cuts a day, but just give us something,” said Haider Hussein, a 32-year-old labourer.

Power went out completely across most of the country’s provinces before dawn, residents said, in some of the worst shortages this year. Some main grid electricity had returned to Baghdad by the afternoon.

The sky over Baghdad, where residents enjoy better supply than poorer southern parts of Iraq, clouded with smog after sunrise as homes ran their diesel-fuelled generators for much longer periods than usual.

Power from Iraq’s main grid suffers year-round from hours-long cuts each day, but the shortages worsen during the hot summer months when temperatures regularly reach 50 degrees and households rely on air conditioning.

Iraqis blame a government which relies on energy imports from Iran and which they say has failed to develop Iraq’s own grid to serve its population. Iraq’s electricity minister resigned this week under pressure over the power crisis, local media reported.

Haider al-Saidi, a 52-year-old tribal leader protesting in Sadr City, blamed the political class that has ruled Iraq since the overthrow of Saddam Hussein in 2003.

“From that regime to this one, still we don’t have enough electricity. What has democracy brought? It just goes from bad to worse,” he said.

Reduced power supplies from Iran this month and a series of attacks on power lines by militants have compounded the electricity crisis.