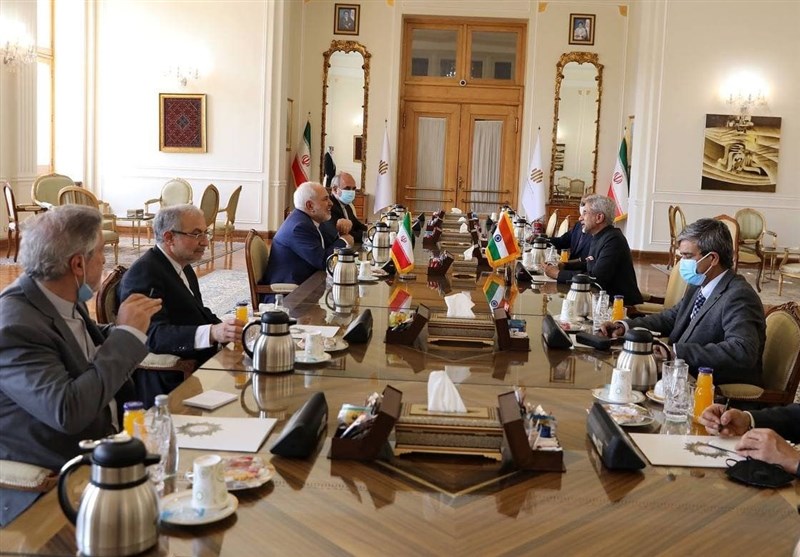 Foreign Minister of Iran Mohammad Javad Zarif and his Indian counterpart Subrahmanyam Jaishankar at a meeting in Tehran talked about various issues, from the relations between the two Asian countries to efforts to ensure peace in the region.

Jaishankar, who had a stopover in Tehran on Wednesday evening to deliver a written congratulatory message from Indian Prime Minister Narendra Modi to Iranian President-elect Ebrahim Raeisi, held a meeting with Zarif.

The two senior diplomat discussed a range of topics in the meeting, such as bilateral issues of mutual interest, the latest developments in the region, situation in Afghanistan, prospects for the Vienna talks on the JCPOA, and transport and communications cooperation, including cooperation in Chabahar port to promote convergence in the region.

They also stressed the need to strengthen intra-Afghan dialogue in Afghanistan, which they said would lead to a comprehensive political solution.

Referring to the latest round of talks between the Afghan government and the Taliban in Tehran, the Indian foreign minister thanked Iran for its efforts to bring the two sides closer to a comprehensive political solution, the Iranian Foreign Ministry’s website reported.

After the layover in Tehran, the top Indian diplomat traveled to Russia for talks on the latest developments in Afghanistan.

Jaishankar will reportedly hold a bilateral meeting with his Russian counterpart Sergey Lavrov to cement ties as well as prepare for President Vladimir Putin’s forthcoming visit to India.