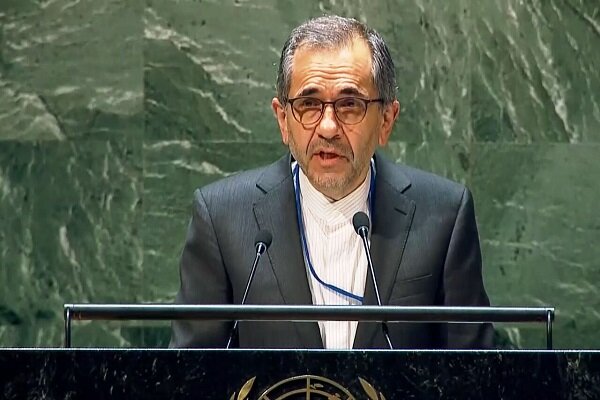 Speaking at 10th Review Conference of Nuclear Nonproliferation Treaty (NPT) at the United Nations Headquarters in New York on Wednesday evening, Majid Takht Ravanchi pointed to Iran’s responsible behavior and strategic patience and maximum resistance to maintain nuclear agreement and said that when the United States adopts right decision, Iran, in return, will stop its compensatory measures and resume full implementation of nuclear measures in accordance with 2015 nuclear deal.

While Iran was fulfilling its nuclear obligations according to the nuclear agreement, certified and approved by IAEA in its 15 explicit, the United States withdrew from JCPOA in May 2018 and reimposed unilateral sanctions and launched a campaign of maximum pressure against Iran in order to prevent Iran from benefiting from promised economic benefits according to the agreement, he added.

Iran’s senior diplomat at the UN reiterated that Islamic Republic of Iran behaved responsibly and could maintain this agreement with its strategic patience and maximum resistance.

As of April 2021, Iran is negotiating in good faith with other parties to resume full implementation of the agreement, he said, adding that achieving this goal has been delayed because US government has not yet decided to guarantee Iran’s economic benefits as promised under JCPOA.

When US makes the right decision, Iran will stop its compensatory measures and resume full implementation of nuclear measures in line with 2015 agreement, he emphasized.

He went on to say that the 10th Review Conference of Nuclear Nonproliferation Treaty (NPT) is an opportunity to materialize world and the Middle East free from the nuclear weapons.

Emphasizing three main pillars of the treaty including disarmament, non-proliferation and peaceful use of nuclear energy, he clarified that the Conference held in 2000, nuclear states agreed to 13 practical steps to implement Article 6 of the Treaty on Nuclear Disarmament.

In 2000, these countries promised to reduce and finally destroy all types of nuclear weapons, he continued.

Although half a century has passed since enforcement of this binding legal obligation, there are still thousands of nuclear weapons ready for launch in stockpiles, he said, adding that hundreds of billions of dollars spent on replacing and upgrading nuclear arsenals and a nuclear arms race still is going on.

Iran has negotiated in goodwill with all with other participants for resuming the full implementation of the deal. Achieving this objective has been delayed because the United States is yet to decide to give assurance that Iran will enjoy the promised economic benefits in the agreement. When the United States makes the right decision, Iran, in turn, will cease its remedial actions and resume the full implementation of its nuclear-related measures in accordance with the 2015 agreement, he added.
MA/IRN84843942