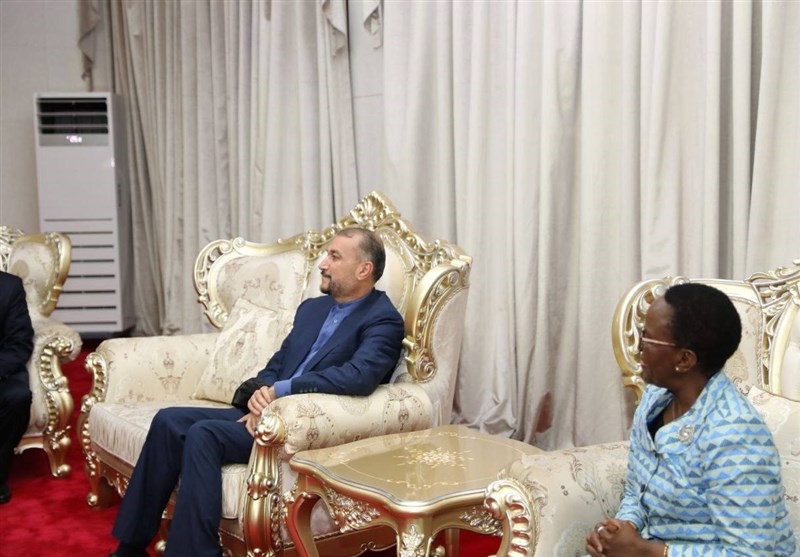 TEHRAN (Tasnim) – Iran and Tanzania plan to set up a roadmap to accelerate the development of their bilateral relations in various fields, Iran’s foreign minister said.

Speaking to reporters upon his arrival in Tanzania on Thursday on the second leg of an African tour, Hossein Amirabdollahian said he plans to meet the African country’s president to hand over to him an invitation from President Ebrahim Raisi for a visit to Tehran.

The Iranian foreign minister, who was welcomed by his Tanzanian counterpart Liberata Mulamula, had earlier wrapped up a visit to Mali and is scheduled to travel to Zanzibar later.

Amirabdollahian said businessmen and industrialists accompanying him in this trip would hold an important meeting in the city of Dar es Salaam to discuss ways to improve mutual relations.

The Tanzanian foreign minister hailed the visit by her Iranian counterpart to her country and told reporters that the two countries enjoy very close relations.

Addressing a joint press conference with his Malian counterpart Abdoulaye Diop in Bamako on Tuesday, Amirabdollahian said terrorism in West Asia and Africa is a product of interference by extra-regional countries.

“Interference by some extra-regional countries is the reason behind the formation of some terrorist groups in the West Asia region and Africa,” the top Iranian diplomat said.

At the end of the first meeting of the Iran-Mali joint cooperation commission, the two countries signed a document and agreed to hold the next session in Tehran.

Before setting off for his regional tour of Africa on Monday, Amirabdollahian said the Islamic Republic pays serious attention to the improvement of ties with all regions of the world.

With regard to foreign policy, “Our priorities include Asia, neighboring countries as well as some other countries, including (those in) the African continent,” Iran’s foreign minister said.