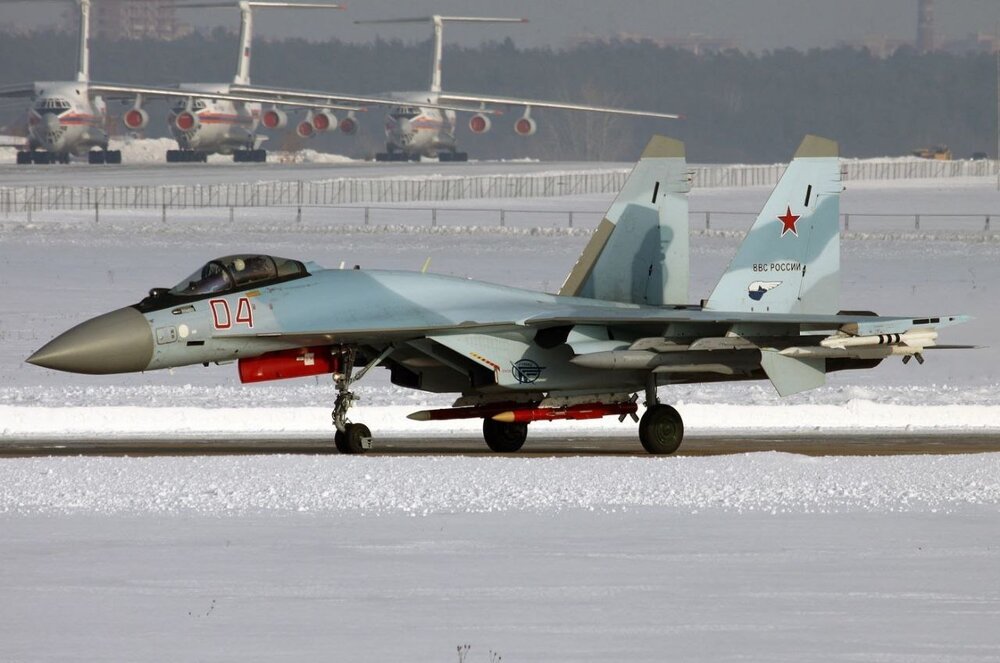 Vahedi announced that purchase of Sukhoi Su-35 fighters from Russia is on the agenda of the air force.

He said the purchase of Sukhoi Su-35 is currently being discussed, rather than Sukhoi Su-30.  “This issue is on the agenda and we hope to be able to get these 4++ generation fighters in the future.”

The commander of the air force also emphasized that the final decision on purchase of Sukhoi Su-35s from Russia rests with the Army and the Armed Forces General Staff Headquarters.

The Su-35 employs the powerful N035 Irbis-E (“Snow Leopard”) passive electronically scanned array (PESA) radar, which is a further development of the N011M radar that had been evaluated on Su-27M test-beds and constitutes the core of the Su-35’s weapons-control system. It is capable of detecting an aerial target up to 400 km (250 miles) away, and can track thirty airborne targets and engage eight of them simultaneously; in addition, the multi-function radar is capable of providing high-resolution images of the ground using synthetic aperture mode.

The aircraft is equipped with an OLS-35 optoelectronic targeting system ahead of the cockpit to provide other forms of tracking including infra-red search and track. For the purpose of defending against enemy tracking, the Su-35 is equipped with the L175M Khibiny-M electronic countermeasure system, while engineers have applied radar-absorbent materials to the engine inlets and front stages of the engine compressor to halve the Su-35’s frontal radar cross-section and minimize the detection range of enemy radars.

The Su-35 is powered by a pair of Saturn AL-41F1S turbofan engines, formerly known as izdeliye (Product) 117S. A highly upgraded variant of the AL-31F, the AL-41F1S is related to the Su-57’s Saturn AL-41F1 (izdeliye 117), differing primarily in the engine control system.

The engines are equipped with thrust-vectoring nozzles, which have their rotational axes canted at an angle; the nozzles operate in one plane for pitch, but the canting allows the aircraft to produce both roll and yaw by vectoring each engine nozzle differently; this configuration was first implemented on the Su-30MKI and is also used on the Su-57.

The Western media has been rambling on and on about a possible drone deal between Tehran and Moscow.

In a news piece published last week, NBC News said, “Russia has picked up the first batch of Iranian drones for its war in Ukraine but it has run into technical problems in the initial tests of the unmanned aircraft,” quoting U.S. officials as claiming on Tuesday.

“Facing a protracted war in Ukraine and a wall of Western sanctions, Russia is turning to Iran to bolster its military and keep its economy afloat, as both countries’ interests converge,” the article continued.

This is while Iranian officials have yet refused to comment on Iran cooperating with Russia regarding drones.

“Russian cargo planes loaded up Mohajer-6 and Shahed-series unmanned aerial vehicles over several days this month at an Iranian airfield and then ferried the drones to Russia, three U.S. officials told NBC News. The delivery is part of Russia’s plans to import ‘hundreds’ of drones from Iran, they said,” NBC added.

It is no secret that Iran’s drone capabilities have won the attention of military strategists. Also, it is highly important that Iran has been using domestic knowledge to build advanced drones and is ready to export them.

Yet, Iran has been insisting that the war in Ukraine should come to an end through dialogue.

Knowledge-based companies are the brains behind these advances in drone industry, IRGC aerospace commander Amir Ali Hajizadeh announced on August 22.

Iran has made it clear that it will not stop advancing its drone technology under any circumstances.

“In many production sectors, we do not have the background and resources for many actions, and knowledge-based activities should create these. If this happens, we can solve problems and create jobs in most of the industries,” Hajizadeh explained.

Defense capabilities are the product of the interaction of the armed forces with knowledge-based companies, he pointed out, adding, “We need knowledge-based measures in many sectors so that we would not be dependent on foreign countries, since knowledge-based production can create leaps.”

The IRGC aerospace chief stated that these steps have been taken in the defense industry, noting that Iran did not possess such capabilities in the past.

“In the past, we imported barbed wire, but now we export drones. Undoubtedly, this path has been paved by establishing a relationship between knowledge-based departments, universities and military elites,” he underscored.

Hajizadeh added that the aerospace division the IRGC has invested in research sector so that it can overcome obstacles.

“This gave Iran superiority in the airspace, and we heard many times that the Westerners expressed the priority of negotiations in limiting our drones and missile power,” he remarked.