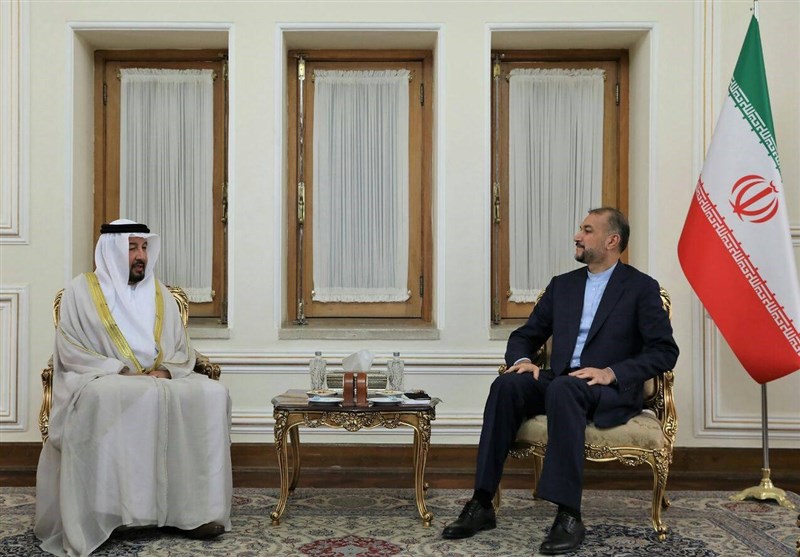 TEHRAN (Tasnim) – The foreign minister of Iran highlighted the Islamic Republic’s interest in expanding relations with neighbors, including the United Arab Emirates, whose ambassador has returned to Tehran after six years.

Ambassador of the United Arab Emirates to Iran Saif Mohammed Al Zaabi is back in Tehran more than six years after the Persian Gulf Arab state downgraded ties with Iran.

“According to the policy of orientation to neighbors, we are interested in promoting relations with all neighbors, including the UAE,” the top Iranian diplomat said.

Amirabdollahian also stressed the need to employ the existing capacities for the enhancement of relations, convene the High Commission of Cooperation, organize consular ties, and facilitate the activities of the Iranian educational, service and medical institutions in the UAE.

The Iranian foreign minister emphasized the necessity for cooperation among the regional states to ensure stability and security across the region.

For his part, the Emirati ambassador expressed delight at the resumption of his mission in Iran.

Describing the great economic and trade potential of Iran and the UAE as a major factor in the enhancement of relations, Al Zaabi pointed to the UAE high-ranking officials’ push for good relations with Iran, the activities of the relevant committees, and the exchange of delegations.

After a meeting with new Emirati President Mohamed bin Zayed Al Nahyan in Abu Dhabi in May, Amirabdollahian hailed the opening of a new chapter in the relations between Iran and the United Arab Emirates.

“We warmly shake hands with our neighbors. The warmth of the neighbors’ relations disappoints the enemies of the region,” the Iranian minister said.