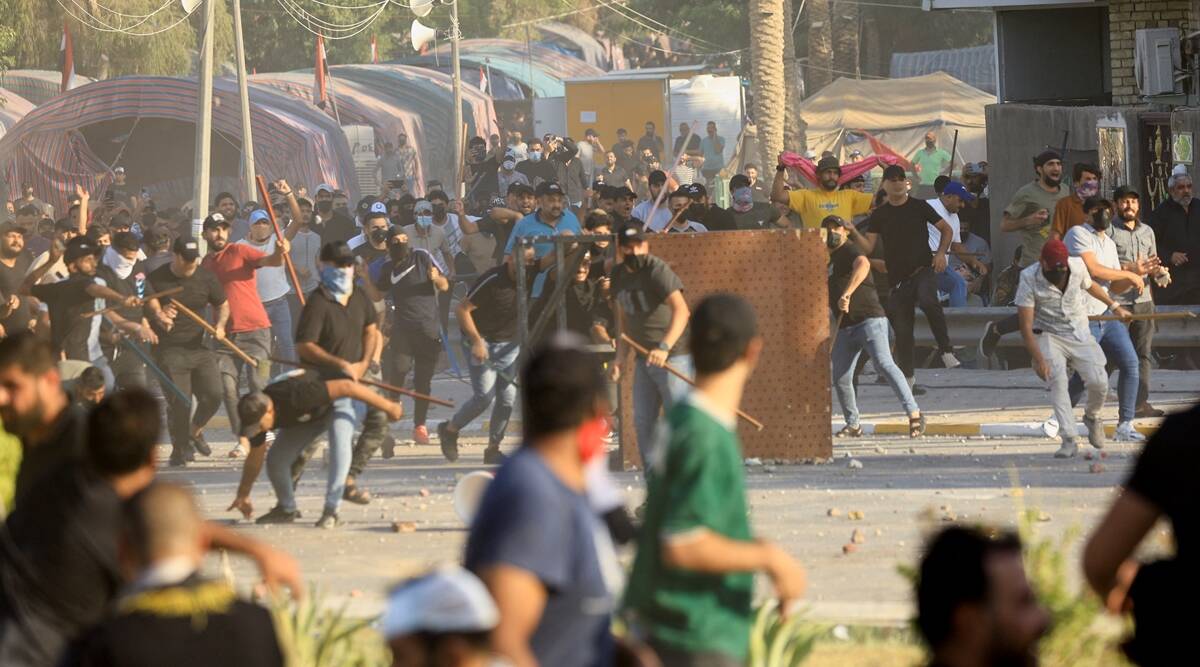 Iran closed its land borders to Iraq as flights to the country halted Tuesday amid violence in Baghdad following an influential Shiite cleric’s announcement he would resign from politics.

The death toll rose to 22 Iraqis on Tuesday after the unrest erupted the previous day, according to two medical officials.

Al-Sadr’s sudden resignation has catapulted Iraq into violence and chaos with no clear path out. The cleric derives power from his ability to mobilize and control his large grassroots following, but with his stated exit from politics, he has implicitly given them the freedom to act as they see fit.

To avenge the killing of unarmed loyalists, al-Sadr’s militia Saraya Salam clashed with Iraqi security forces in the Green Zone using an array of weapons, including mortars and rocket-propelled grenades, two security officials said. The militia also took over some headquarters belonging to rival Iran-backed militia groups in the southern provinces overnight.

Iranian state television cited “unrests” and “curfew” in Iraqi cities for the reason for the border closures. It urged Iranians avoid any travel to Iraq while urging Iran’s Shiite pilgrims in Iraq to avoid further travel between cities.

Iraq’s government has been deadlocked since al-Sadr’s party won the largest share of seats in October parliamentary elections but not enough to secure a majority government. His refusal to negotiate with his Iran-backed Shiite rivals and subsequent exit from the talks has catapulted the country into political uncertainty and volatility amid intensifying intra-Shiite wrangling.

To further his political interests, al-Sadr has wrapped his rhetoric with a nationalist and reform agenda that resonates powerfully among his broad grassroots base of supporters. They are calling for the dissolution of parliament and early elections without the participation of Iran-backed Shiite groups, which they see as responsible for the status quo.

The decision came as millions of Iranians were preparing to visit Iraq for annual pilgrimage to Shiite sites.

Kuwait meanwhile has urged its citizens in neighboring Iraq to leave the country. The state-run KUNA news agency also encouraged those hoping to travel to Iraq to delay their plans over the eruption of violent street clashes between rival Shiite groups in the country.

The Netherlands has evacuated its embassy in the Green Zone, Foreign Affairs Minister Wopke Hoekstra tweeted early Tuesday. “There are firefights around the embassy in Baghdad. Our staff are now working at the German embassy elsewhere in the city,” Hoekstra wrote.

Dubai’s long-haul carrier Emirates stopped flights to Baghdad on Tuesday over the ongoing unrest in Iraq. The carrier said that it was “monitoring the situation closely.” It did not say whether flights would resume for Wednesday.

Protesters loyal to cleric Muqtada al-Sadr, who resigned Monday, pulled down the cement barriers outside the government palace with ropes and breached the palace gates. Many rushed into the lavish salons and marbled halls of the palace, a key meeting place for Iraqi heads of state and foreign dignitaries.

Iraq’s military announced a nationwide curfew, and the caretaker premier suspended Cabinet sessions in response to the violence. Medical officials said dozens of protesters were wounded by gunfire and tear gas and physical altercations with riot police.