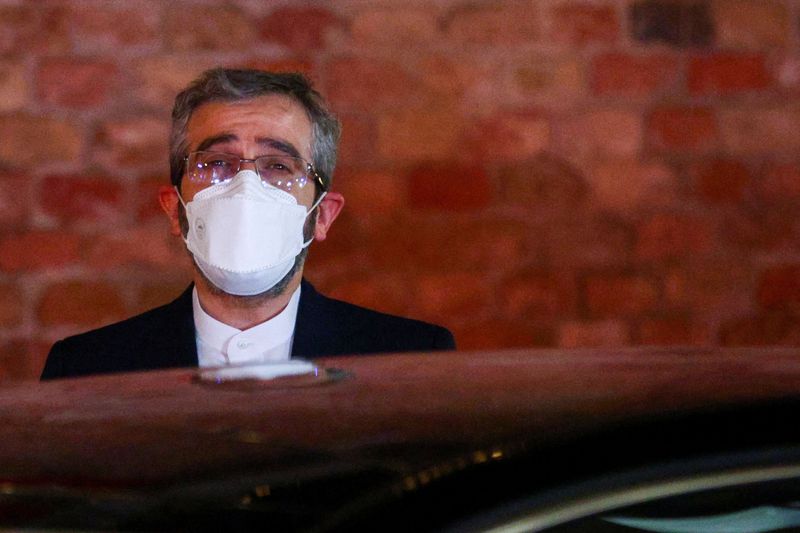 VIENNA (Reuters) – Iran on Tuesday accused Western parties to its 2015 nuclear deal of “persisting in their blame game”, a day after European diplomats said the accord would soon be an empty shell, without progress.

“Some actors persist in their blame game habit, instead of real diplomacy. We proposed our ideas early, and worked constructively and flexibly to narrow gaps,” Iran’s top negotiator, Ali Bagheri Kani, said on Twitter.

“Diplomacy is a two-way street. If there’s real will to remedy the culprit’s wrongdoing, the way for a quick, good deal will be paved.”

On Monday, British, French and German diplomats said major powers and Iran had yet to get down to business at talks on rescuing the nuclear deal, which will very soon become “an empty shell” without progress.

“As of this moment, we still have not been able to get down to real negotiations,” the diplomats from the so-called E3 said in a statement about the Vienna nuclear negotiations in which they are shuttling between U.S. and Iranian officials.

“Time is running out. Without swift progress, in light of Iran’s fast-forwarding of its nuclear programme, the (nuclear pact) will very soon become an empty shell,” they added.

The statement offered a pessimistic assessment of efforts to revive the deal under which Iran had limited its nuclear programme in return for relief from U.S., European Union and U.N. economic sanctions.

Then-President Donald Trump pulled the United States out of the accord in 2018 and reimposed U.S. sanctions, prompting Iran to begin violating its nuclear restrictions in 2019.

Trump’s successor, Democrat Joe Biden, has sought a mutual return to compliance with the deal via indirect talks with Iran as Tehran refuses to meet directly with American officials.

The other countries in the deal are Britain, China, France, Germany and Russia.

Diplomats said they made significant progress in the six rounds of negotiations between April and June, when the talks took a five-month hiatus after the election of hard-line cleric Ebrahim Raisi as Iran’s president.

During the seventh round, which began on Nov. 29, Iran abandoned any compromises it had made in the previous six, pocketed those made by others, and demanded more, a senior U.S. official has said.