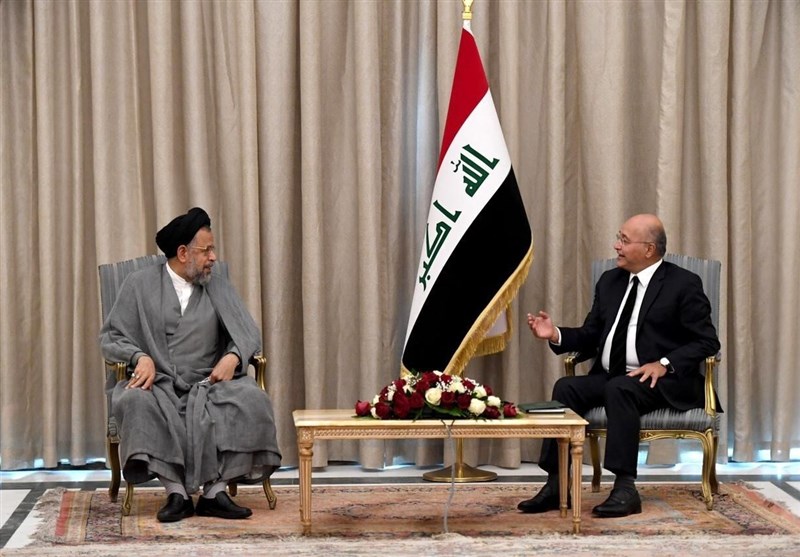 In the Wednesday meeting at the Iraqi capital Baghdad’s al-Salam Palace, the intelligence minister underlined “the importance of strong relations between the countries and their peoples.”

He also relayed Ayatollah Khamenei’s supportive stance in favor of “reinforcement of the bilateral cooperation and coordination towards confronting terrorism, extremism, and establishment of peace in the region.”

Alawi also communicated the Leader’s condolences over the recent tragedy that afflicted a hospital in the southern Iraqi city of Nasiriyah in which a raging blaze killed scores of people.

The two sides discussed further enhancement of relations between the neighboring, and the importance that betterment of the ties bore for the friendly nations, exchanging views on the manner of expansion of the relations in all areas in the service of the countries’ common interests.

Addressing Alawi, Saleh laid emphasis on the depth of the two sides’ historical ties, and likewise underlined “the need for the development of the outlook of bilateral cooperation between the countries in all fields.”

He also noted that “a strong, safe, stable, and sovereign Iraq that enjoys balanced relations with the surrounding Arab and Muslim countries, (in turn) serves as a stabilizing element and the confluence of the regional countries’ common interests and reinforces the regional peace and security.”

He expressed gratitude towards the Islamic Republic for its supportive positions regarding his country, and thanked Tehran for the backing that it has been providing for Baghdad, especially in the area of fighting terrorism and confronting the Takfiri terrorist group of Daesh.

In 2014, Iran became the first country to rush to Iraq’s assistance in the face of Daesh after the group launched its campaign of bloodshed and destruction against the Arab nation.

The support that has taken the form of military advisory assistance for the Iraqi defense forces in their counter-terrorism efforts, helped Baghdad defeat Daesh in late 2017.

The commander, who has earned a reputation as the region’s most popular and decisive anti-terror military official, was, however, martyred in a United States drone strike early last year.

The strike that also led to the martyrdom of many others, including senior Iraqi anti-terror commander, Abu Mahdi al-Muhandis, was ordered by former US president Donald Trump while General Soleimani was paying an official visit to the Iraqi capital.

It came amid warnings in numerous reports and by many regional officials that the US was seeking to keep using Daesh as an excuse to prolong its military and political interference in Iraq.

Following the atrocity, the Iraqi parliament passed a law, mandating all the US-led forces to leave the country.

Upon arriving in Baghdad, the Iranian intelligence minister paid a visit to the site, where the barbaric assassination had targeted the convoy that was carrying General Soleimani, Abu Muhandis, and their companions.

Tehran and Baghdad have also vowed to cooperate maximally to bring the perpetrators to justice.