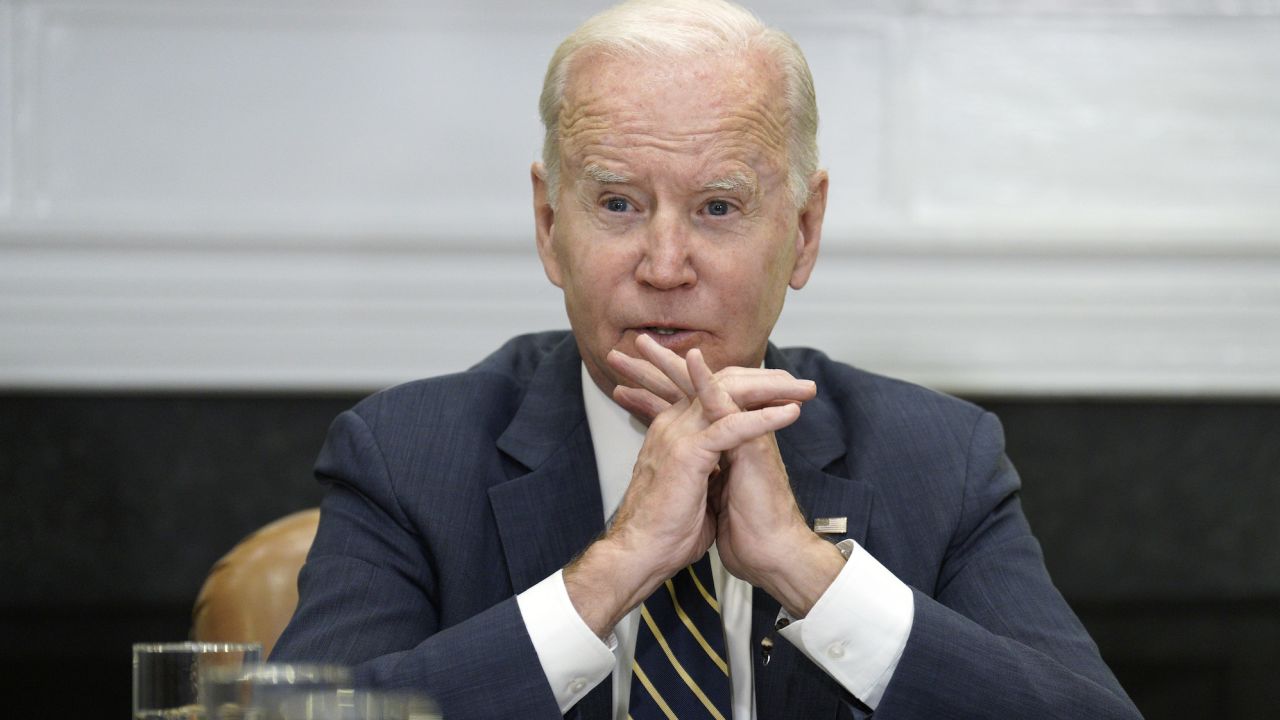 There were no illusions inside the White House that the decision to call on Congress to impose a negotiated labor agreement on railroad workers and operators would be universally well received, several officials said.

President Joe Biden’s announcement of the move on Monday was as notable for its 506-word length and detailed, bordering on pained, explanation for the decision to implicitly buck close political allies as it was for the decision itself.

The fierce pushback from the labor movement was expected, even if unwelcome, one official said. Similar concerns from Democratic allies on Capitol Hill were viewed as inevitable as the White House moved toward a course of action pursued 18 times in the past to prevent a rail shutdown and the sweeping economic fallout that would follow. The House is expected to vote Wednesday on legislation to avert a rail strike.

Ahead of a December 9 deadline to avoid such a scenario, time was ticking.

As Biden sat with the top four congressional leaders less than 24 hours later on Tuesday, he laid out in simple terms the strategic calculation that outweighed his decades of close ties to labor and general support for the very policies rank-and-file members were advocating including in a revised agreement.

“It’s not an easy call, but I think we have to do it,” Biden said of legislation to avoid a strike before his meeting with the bipartisan lawmakers at the White House. “The economy is at risk.”

Biden was seated near Speaker Nancy Pelosi, the top House Democrat and a close ally who made clear after the meeting that despite her reluctance to undercut the negotiating power of labor unions, she would move forward with Biden’s call to pass legislation adopting a September tentative agreement approved by labor and management leaders.

But it was Pelosi’s own statement, coming less than 30 minutes after Biden’s, that provided a glimpse into the intensive behind-the-scenes effort underway for months to prevent what White House officials viewed as an unacceptable economic catastrophe.

The House would move within days to answer Biden’s call, Pelosi announced. The coordination was clear, as were the stakes. Biden had spoken directly to Pelosi and Sen. Chuck Schumer, her Senate counterpart, a source familiar with the matter said.

Administration officials had been providing continuous updates to congressional leadership since the end of October, the source said. By mid-November those updates had started to include contingency planning should an agreement be viewed as out of reach. That included congressional action to implement the tentative agreement.

Lawmakers technically have the authority to pursue multiple options, including an extension of a “cooling-off period” where talks could continue without the threat of an imminent strike. Union representatives never asked for that option to be pursued.

Still, officials said requesting congressional action wasn’t a move Biden wanted to take – and in fact, had rejected as an option in the lead up to the tentative agreement reached by the two sides in September. But with a deadline looming, it was one that underscored a stalemate White House officials had concluded over the course of several weeks couldn’t be overcome.

Before his announcement, Biden also spoke to the Cabinet officials who had run point on the talks: Labor Secretary Marty Walsh, Agriculture Sectary Tom Vilsack and Transportation Secretary Pete Buttigieg. The agencies also made up the key players in the interagency rail group that had been meeting daily throughout November.

The message about where things stood was clear.

“During the ratification votes, the Secretaries of Labor, Agriculture, and Transportation have been in regular touch with labor leaders and management,” Biden said in his statement announcing his decision. “They believe that there is no path to resolve the dispute at the bargaining table and have recommended that we seek Congressional action. “

Biden’s decision to call on Congress to act marks the latest turn in a process administration officials have been intensively navigating for months. It marked a complex convergence of business and labor disputes exacerbated by a once-in-a-century pandemic, legal and economic constraints, long-standing political alliances and, until November, the acute reality of the looming midterm elections.

The tentative agreement between rail carriers and unions, which came after a 20-plus hour marathon of negotiations, included key elements for rail workers, officials noted. Union leaders had signed off on the proposal, which includes immediate 14% raises with back pay and 24% raises over the course of five years, plus $1,000 cash bonuses every year.

It marked the biggest pay increases won by the unions in more than 50 years.

But the rejection of the agreement by four unions underscored a driving reality at the heart of the dispute: wages and economics never appeared to be the biggest sticking point in the negotiations.

There were scheduling rules that kept many of the workers on call seven days a week, even when they weren’t working, the lack of the sick pay that’s common for workers in other industries, and staffing shortages.

When Biden stepped to the podium placed in the Rose Garden months ago to celebrate the hard-fought agreement to avert a rail strike, his top aides and Cabinet officials knew their work was far from complete.

Biden called the deal a “win for America,” one that would avert looming economic calamity. It marked a compromise between rail carriers and union leaders that just 24 hours prior appeared far from a sure thing.

Clinched just weeks before the midterm elections, it also marked an escape from potential political calamity for Biden and congressional Democrats, multiple people closely involved with or briefed on the negotiations acknowledged.

But it was a momentary respite.

The weeks ahead would be filled with regular briefings for lawmakers and constant contact with union and carrier representatives. The deal, in the end, would not hold on its own – something officials became increasingly aware of in the weeks leading up to the deadline, sources said.

In the months that followed, the work behind the scenes by top administration officials with counterparts on Capitol Hill and the key negotiators underscored the scale of the challenge that remained as rank-and-file union members took stock of the deal – and in some cases found it critically lacking.

For Biden, who never misses an opportunity to tout his labor bona fides, and his team, which is stocked with officials carrying close ties to labor, the discontent resurfaced the complex reality his administration confronted in the furious effort to clinch the deal in the first place.

Rank-and-file union members viewed the lack of paid sick leave provisions as a critical omission coming out of the pandemic. Four of the 12 unions party to the negotiations voted to reject the deal their leaders signed off on in September.

Administration officials shared union concerns over the lack of paid sick leave in the agreement, but the agreement represented a compromise they viewed as containing clear wins for workers who had grown more vocal in their serious concerns about their work environments.

More critically, officials noted, the administration wasn’t a party at the negotiating table.

Exceedingly cautious in their efforts not to overstep their legal authority – and keenly aware of the risks of a pro-union administration being seen as putting its thumb on the scale during negotiations between the two sides – officials served in a mediation and convening role.

Walsh, the Labor Department secretary who convened the top negotiators at his agency in the final Italian food-fueled marathon talks to hammer out the tentative agreement, continued in that role as soon as the agreement was announced.

Even as unions started to vote to reject the agreement, Walsh tried to find a path forward.

White House officials and Democratic leaders spent Tuesday moving quickly to solidify support for legislative action with time to spare before a December 9 deadline, officials on both sides of Pennsylvania Avenue said.

The objections have been bipartisan, if not yet widespread. Sen. Marco Rubio, a Florida Republican, said he would oppose an agreement rejected by workers.

Sen. Bernie Sanders, the Vermont independent, signaled he wouldn’t agree to speed up Senate consideration without a vote to guarantee seven paid sick days for workers.

House Democratic leaders, seeking to mollify concern inside their caucus, ultimately chose to schedule a separate vote on legislation to add paid leave to the agreement.

Still, the Democratic-controlled House is scheduled to hold the vote on Wednesday to pass the bill codifying the agreement. Schumer, after the meeting with Biden, said he and Sen. Mitch McConnell, the chamber’s top Republican, have agreed to move forward “as soon as possible” after House passage.

For lawmakers grappling with a substantial to-do list in the final weeks of this Congress, the willingness to prioritize the issue underscores a shared sense of urgency of the consequences of inaction.

So does the willingness of Biden – who, as a senator, once voted to oppose congressional action to implement a rail labor agreement – to press lawmakers to act.

While Biden has been on the receiving end of plenty of criticism from organized labor since his decision to publicly call on Congress to pass a bill to avert a strike this week, the current situation could hardly be described as “Biden sticking it to the unions,” one labor strategist familiar with the rail strike talks told CNN, adding that turning to Congress was “always lurking there in the background.”

“It’s not Reagan coming in with PATCO or anything like that,” the strategist said, referring to President Ronald Reagan’s famous decision in the early 1980s to fire thousands of members of the Professional Air Traffic Controllers Organization in response to their strike. “It is a deal where the White House and DOL and everybody weighed in pretty heavily on labor’s side.”

Just a few hours after Biden touted the necessity of congressional action, he was in Bay City, Michigan, to champion his administration’s economic agenda.

Despite the criticism from allies – and urgent effort underway on Capitol Hill to secure the votes – there was no mention of the rail talks.

But there was also no hesitation to deploy a tried-and-true applause line Biden has rolled out repeatedly in his first two years in office – one that underscored ties that White House officials view as durable enough to weather the moment.