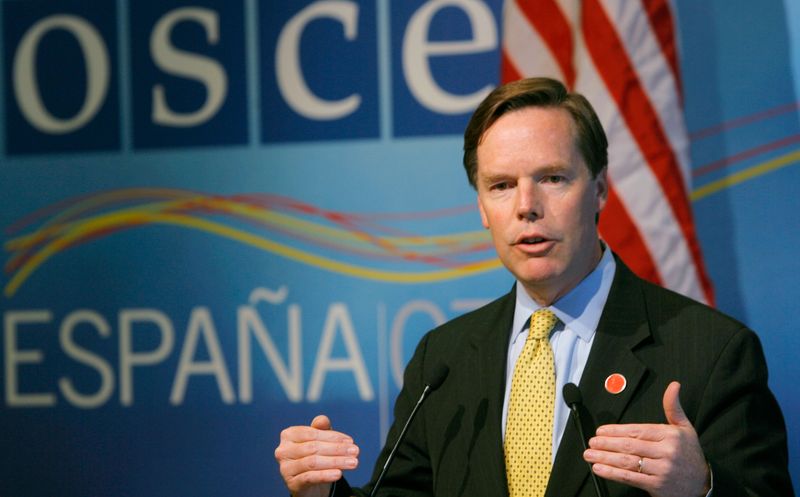 FILE PHOTO: Nicholas Burns, U.S. Undersecretary for Political Affairs, gestures during a news conference at the end of the Organization for Security and Co-operation in Europe (OSCE) ministerial meeting in Madrid November 30, 2007. REUTERS/Sergio Perez

WASHINGTON (Reuters) -Veteran U.S. diplomat Nicholas Burns has been nominated by President Joe Biden to serve as U.S. ambassador to China, the White House said on Friday, signaling the administration may be looking for the envoy to play a more central role in the increasingly fractious relations between the two global rivals.

The choice of Burns, a retired career foreign service officer who served as under secretary of state between 2005 and 2008, marks a shift for the role of the ambassador to Beijing, the ranks of which over the past decade have been filled by former politicians, not seasoned diplomats.

If confirmed by the Senate, Burns would head to China as the two countries’ ties are at their lowest point in decades, and fill a post left vacant since October, after former President Donald Trump’s envoy to China, Terry Branstad, stepped down.

The United States and China, currently the world’s No. 1 and No. 2 economies, are at odds over issues including trade, technology, U.S. arms sales to Taiwan and Chinese military activities in the disputed South China Sea, with each accusing the other of deliberately provocative behavior.

While Burns is not seen as a China policy specialist, neither were the previous four U.S. ambassadors to Beijing.

Burns, however, has ties to Biden, having served as an adviser to his election campaign, and has worked closely over the years with some of Biden’s most trusted advisers, including Secretary of State Antony Blinken.

Former Republican President George W. Bush appointed him as under secretary for political affairs, historically the State Department’s third-ranking official, with global responsibilities, where he served until 2008.