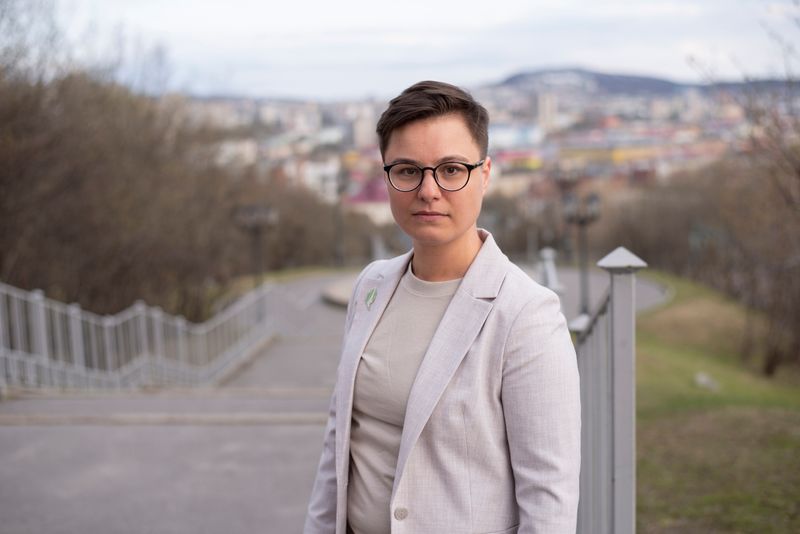 MOSCOW (Reuters) – First came leaflets in her stairwell accusing her of encouraging children to become gay. Then her office was vandalised and its windows shot at. And after that she was taken to hospital for COVID-19 treatment that she said she did not need or want.

Violetta Grudina, an opposition activist in Russia’s Arctic port city of Murmansk, says the intimidation began after she said she would run for the city council in local elections being held alongside a federal parliamentary vote on Sept. 17-19.

She says she does not know who placed the leaflets, shot the windows or ordered her hospitalisation and a prosecution but accuses local authorities of a dirty tricks campaign.

She was later barred from the ballot as an ally of jailed opposition politician Alexei Navalny, whose movement was banned as extremist in June.

“It was a scare campaign, an intimidation campaign – the public steamrolling of an opposition candidate so people never even think of taking part in politics out of fear of the repressions I’ve faced,” Grudina, 31, told Reuters.

The Kremlin has declined to comment on Grudina’s allegations. It denies targeting opposition politicians and says people are only taken to court if they break the law. The local city and governor’s offices did not immediately reply to requests for comment.

The ruling United Russia party, which supports President Vladimir Putin, is expected to retain its dominance at the elections despite a ratings slump fuelled by rising prices and stagnant or falling wages.

Grudina ran a campaign office in Murmansk for Navalny until it become clear this year that it would be outlawed.

The authorities cast Navalny and his supporters as Western-backed troublemakers bent on destabilising Russia, a charge they reject. Many of them have described intimidation, but Grudina’s account points to a multi-pronged campaign.

A former LGBT activist, Grudina says she began to oppose Putin when Russia passed a law in 2013 banning “gay propaganda” to minors, a law she said was discriminatory. She says neither she nor anyone else was engaged in spreading “gay propaganda”.

In April she announced she would run for the 28-seat council in Murmansk that approves the budget for the city, capital of the region where Russia’s Northern Fleet is based.

Defamatory leaflets appeared in her neighbours’ post boxes soon afterwards. Then someone sealed her office shut with foam and drew a swastika on it. It was later vandalised again and her office windows were shot at overnight, with 11 holes visible in the photographs she posted on social media.

Grudina says that then, after she had recovered from a mild case of COVID-19 and sat out a mandatory self-isolation period, she was ordered by a court to be hospitalised, ostensibly for treatment, during the election registration period.

She said the court rejected a negative test she had received and that she ended up in hospital for almost three weeks.

She tried to register remotely and, when that failed, declared a hunger strike. She was released from hospital several days later and was formally charged with flouting COVID-19 safety rules.

Media accounts of the ongoing court case show that it rests on when she should have begun isolating and for how long rather than evidence that she infected anyone. Grudina says she followed instructions. The hospital declined to comment.

Out of hospital, Grudina was able to register as a candidate – but was then barred by the designation of Navalny’s allies as “extremist”, a ruling that came into force last month.

She draws inspiration to continue from Navalny, who is serving a 2-1/2 year jail term on charges he says are trumped up after a poisoning by what Western governments say was a military nerve agent.

“Dark times have begun, that’s obvious,” Grudina said. “It’s become much harder to work … (but) if we give up, then what was this all for?”