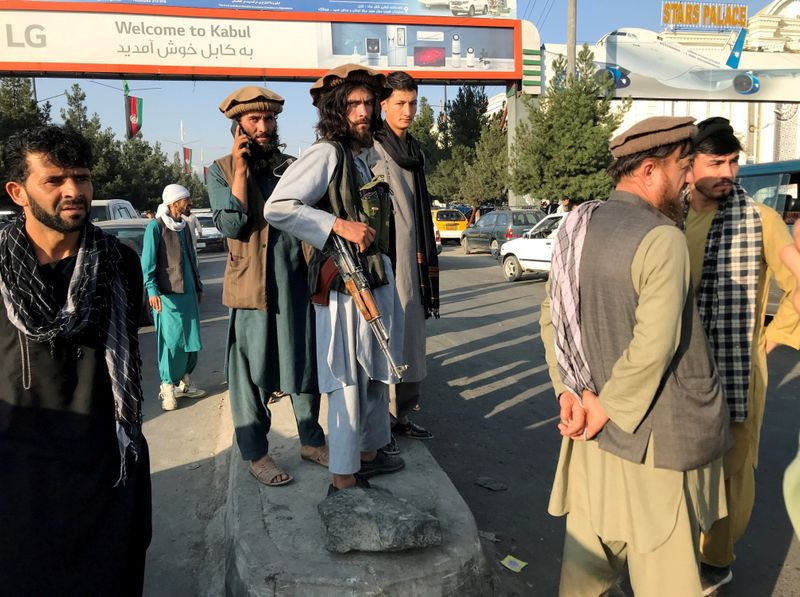 AMMAN (Reuters) – Across the Middle East, the Taliban’s rapid seizure of power in Afghanistan has been seen by some as a signal that players in the region can no longer depend on diminishing U.S. power.

While the Taliban’s ability to retake ground from foreign forces was welcomed by anti-Western factions, the group’s advance has also triggered concerns that the country could once more become a haven for Arab militants.

Fighting to expel foreign forces since being overthrown in 2001, the Taliban seized Kabul on Sunday after a lightning offensive as U.S.-led Western forces withdrew.

In the Middle East, where the United States has long been the dominant outside power although its involvement has receded since it drew down forces in Iraq, events in Afghanistan could prompt states to forge new or parallel alliances, analysts said.

“What happened in Afghanistan reinforces the conviction of numerous Arab regimes that the U.S. role in the Arab and Islamic world … is regressing,” said Mohammad Abu Rumman, a Jordanian analyst and former minister.

“It is time to reduce dependence on Washington in the strategic realm,” Emirati analyst Abdulkhaleq Abdulla wrote in The National.

Western policy and military interventions have sparked resistance movements for decades in the Middle East, and some welcomed the retreat of foreign forces.

The Houthi movement in Yemen and Lebanon’s Hezbollah, both aligned with Iran, made statements drawing attention to what they called U.S. failure and humiliation.

Hezbollah said the American withdrawal should serve as a lesson to U.S.-aligned groups in Lebanon not to depend on Washington as an ally.

“In order not to fight on behalf of anyone, he (U.S. President Joe Biden) accepted bearing a historic and humiliating defeat in Afghanistan,” Hezbollah leader Sayyed Hassan Nasrallah said during a Tuesday night sermon.

Hamas, the Palestinian militant group that controls the Gaza Strip, congratulated the Taliban and the Afghan people. Gazans were pleased about the Taliban’s advance, which offered encouragement to Palestinians living under Israeli occupation, said Mohamed Dadar, a 28-year-old in Gaza City.

Sheikh Ahmed Bin Hamad al-Khalili, the Grand Mufti of the Gulf State of Oman, which has a longstanding policy of neutrality, welcomed the victory over “aggressor invaders”.

However, reactions were tempered by concern over resurgent militancy in Afghanistan, where before 2001 many Arab fighters were trained under Taliban rule for insurgencies back home.

“We are scared of their return,” said 23-year-old Jordanian Taqi Abdelsamad, citing past jihadist violence in Syria and Iraq.

Several groups aligned with al-Qaeda have welcomed the Taliban’s success.

The Taliban’s capture of Kabul could accelerate a trend of jihadists heading for Afghanistan, said Jordanian analyst Abu Rumman, who is an expert on Islamist groups.

“This could encourage in my estimation the morale of thousands of jihadists who crumbled after Daesh (Islamic State) disintegrated, so they believe that things are not so bad.”

However, he added that the Taliban would treat newly arriving jihadists with caution because of a peace deal that led the withdrawal of U.S. forces in Afghanistan.

Others expressed dismay at the return to power of a group with a hardline religious agenda.

“We should all unite to prevent this from happening because it is unacceptable for this to happen to the rights of women and anyone in the Arab and Islamic world,” said Sarah Nawas, a student in the Syrian capital, Damascus.

A Taliban spokesman has suggested that the group will impose laws more softly than during their harsh 1996-2001 rule.

In Iraq, the Taliban’s advance brought back painful memories for some of the seizure of swathes of Iraqi territory by Islamic State in 2014.

“I really sympathize with them (the Afghan people) because I have been through this situation before,” said Khalid al-Rawi, a musician from Mosul, Islamic State’s Iraqi stronghold before it was driven out in 2017.