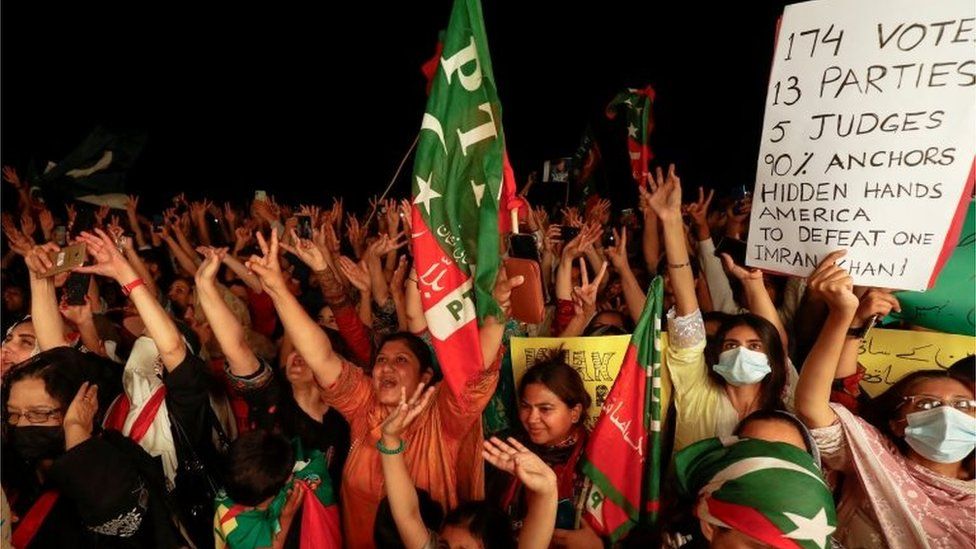 Tens of thousands of Imran Khan supporters took to the streets on Sunday night after the former Pakistani prime minister called for peaceful protests following his removal from office. The tumultuous political drama looks set to continue – but who do his followers blame for his downfall?

“I think Imran Khan is the only honest guy left,” one woman told the BBC. “He’s the only one we can trust and we do not want to be ruled by these traitors.”

Mr Khan has alleged the opposition’s move to hold a vote of no confidence against him was part of a US-led conspiracy, targeting him because of his foreign policy decisions including a recent trip to Moscow that angered Western officials.

Opposition politicians have reacted angrily, accusing Mr Khan of cynically manipulating the public in order to try and remain in power, despite having lost the support of parliament.

Most analysts believe Mr Khan is deliberately exaggerating the contents of a diplomatic cable, sent by the Pakistani ambassador in Washington, reportedly passing on a warning that there would be “consequences” if Mr Khan remained in power.

However, the narrative is resonating with Mr Khan’s supporters, many of whom chanted, “whoever is a friend of America, is a traitor”, at the protests.

At a rally in a park in the capital Islamabad, whole families had turned out to express support for Mr Khan, along with large numbers of young men and women.

“We’ve decided we won’t live a life of slaves,” said one protester. “These people are all thieves and hopefully they’ll all go to jail,” he added, referring to Mr Khan’s opponents.

There was also anger, amongst some, directed at Pakistan’s powerful military.

It’s a sudden U-turn for Imran Khan’s supporters, who until now have frequently praised the role of the army, which it’s widely believed helped him into power in 2018. Videos on social media showed slogans being chanted against the army chief, Gen Bajwa, a rare move in the country.

It’s believed a rift between the army and Imran Khan emerged last year, leading to the military withdrawing its support for his slender ruling coalition.

Defecting members of Imran Khan’s party have described the army’s role as “neutral” – it seems clear, however, that even if not actively involved in his downfall, the military is content to see Imran Khan out of office.

Shahbaz Gill, a close aide to Imran Khan, told the BBC the party respected and loved the Pakistani army.

Many critics of Imran Khan, who have often faced harassment from the intelligence services for criticising the army’s support for his government, noted the sudden change in approach by his followers.

Some remarked on the hypocrisy, given their earlier praise for the army, whilst others welcomed the apparent newfound belief in civilian supremacy.

In one photo, widely shared online, a man holds up a sign reading “How many Vigos can you bring?” referring to a pick-up truck notorious for its use by members of the intelligence services to detain activists.

The image was shared by the former Human Rights Minister Shireen Mazari, who many accuse of not taking action against earlier assaults on critics of her government.

“These Vigos,” one prominent academic wrote, “brought your leader and the likes of you to power.”