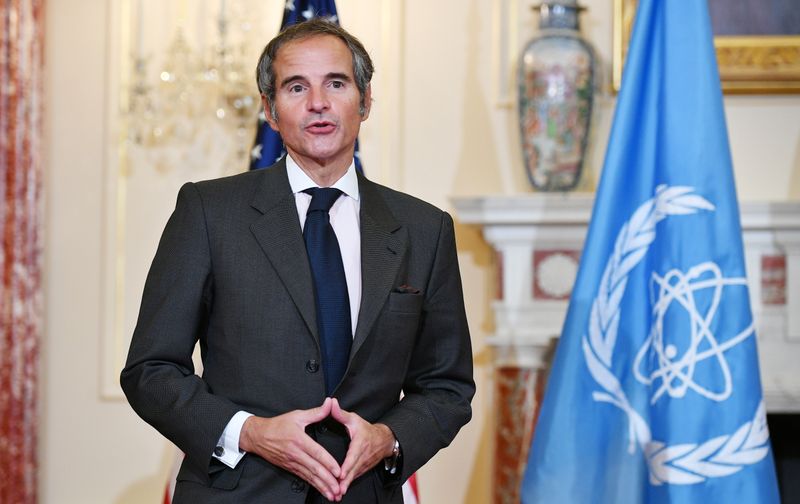 International Atomic Energy Agency Director General Rafael Mariano Grossi speaks with US Secretary of State Antony Blinken (off frame) in the Benjamin Franklin Room ahead of a meeting at the State Department in Washington, D.C., U.S. October 18, 2021. Mandel Ngan/Pool via REUTERS

WASHINGTON (Reuters) -The head of the United Nations’ nuclear watchdog said on Tuesday he anticipates news soon on when he may travel to Iran, adding that he expects to go to Tehran before the agency’s November Board of Governors meeting.

International Atomic Energy Agency (IAEA) Director General Rafael Grossi said in Washington that his expectation was based on his conversations with Iranian officials, but he did not provide details.

“I am expecting news soon about it,” he told reporters.

Grossi said the IAEA has been able to service cameras at all sites in Iran aside from the TESA Karaj complex.

The workshop at the TESA Karaj complex makes components for centrifuges, machines that enrich uranium, and was hit by apparent sabotage in June in which one of four IAEA cameras there was destroyed. Iran removed them and the destroyed camera’s footage is missing.

TESA Karaj was one of several sites to which Iran agreed to grant IAEA inspectors access to service IAEA monitoring equipment and replace memory cards just as they were due to fill up with data such as camera footage. The Sept. 12 accord helped avoid a diplomatic escalation between Iran and the West.