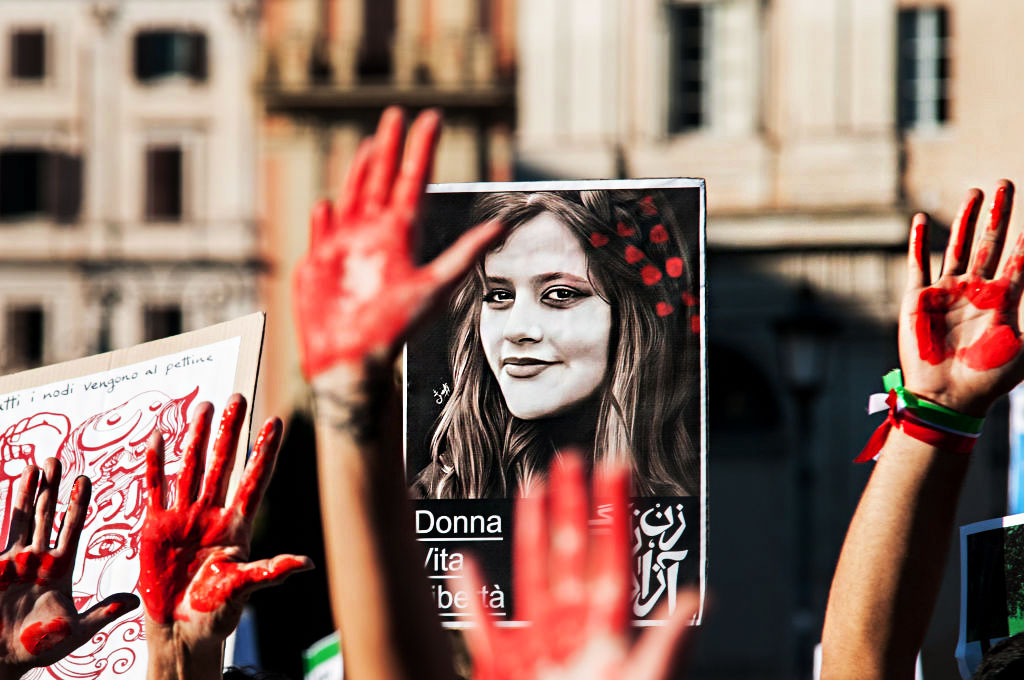 After her death, Jina Amini trended under a name her family and friends never used for her. As Kurds living in Iran, Jina’s parents couldn’t register their daughter using the Kurdish name they had chosen. They had to pick from a list of government-approved names, the majority of which were Persian or Arabic, out of which they reluctantly opted for the name Mahsa. In private, though, they kept calling her “Jina”, which means “life”.

On September 13, having travelled to Tehran to visit her brother, Jina was arrested by the city’s morality police. Soon after her detention, she collapsed. The authorities claim she had a heart attack. Other detainees say she had been tortured. Three days later, she died in hospital. She was 22.

As this information spilled across social media, it sparked a wave of protests the likes of which had not been seen since the 1979 revolution. For Iran’s Kurdish community, it was the beginning of an uneasy alliance with their Persian counterparts.

The two groups have a long history of enmity. The Islamic Republic’s nine million Kurds have historically been a source of paranoia and fear among Iranian authorities. This is partly because of their religious affiliation: whereas Iran has been a Shia Republic since 1979, the majority of Kurds are Sunni Muslims. But Kurds are also unusual in that they tend to venerate their ethnicity over religion. For this reason, during the reign of the Pahlavi monarchy, which began almost 100 years ago, Kurds were seen as disloyal to Iran; they were frequently used as proxy fighting forces both by Iran and its neighbouring countries. This has led to the suppression of Kurdish identity in Iran and, under the current Islamic regime, the militarisation of various Kurdish provinces.

It was these provinces that exploded into protest after Jina’s death — which, for many Kurds, symbolised an unbroken cycle of oppression by the Iranian regime. According to Hengaw, a human rights organisation that tracks rights abuses in the Islamic Republic, 128 Kurds died by direct fire or baton strikes last year, while 52 Kurds were executed in Iranian prisons and 7,000 Kurds were arrested by Iranian security services. Jina’s death was the final straw.

But this time it wasn’t just Kurds protesting. Huge numbers of Persians joined in. In the more affluent cities, including the capital Tehran, they adopted the old slogan of the Kurdish women’s movement, “Jin, Jiyan, Azadi’ (Women, Life, Freedom). But the fact that they translated it into Persian hints at a wider tension in their involvement. While Kurds welcomed the support from the Persian population, it became apparent that the latter’s goals often differed significantly from those of Iran’s minorities.

The asserted aim of many of the Persian protestors is to free women from wearing hijab and reinstate rights of which they are deprived by the Islamic regime. Some advocate for the return of the Shah’s son, and view the Pahlavi as an alternative to the Islamic Republic. Yet many of the nation’s minorities — including Kurds and the Baloch, who are concentrated in Iran’s southern provinces — believe they would face the same oppression under the Pahlavis that they currently face under the Islamic republic.

Speaking from inside the Islamic Republic, Kurdish activist Alan* told UnHerd that he believes recent attention paid to Kurdish issues by certain sections of Iranian society feels insincere. “They used Jina’s death as a token for their own fight,” says Alan. “One week before Jina’s death, a Kurdish woman in Mariwan threw herself from a building after an IRCG [Iranian Revolutionary Guard] guy tried to rape her. The Persians did nothing; they didn’t speak about this because it happened in Kurdistan and they don’t care what happens here.”

What is it like to live in a part of Iran that most Persians try to ignore? Susin*, a 19-year-old student from a Kurdish city close to the Turkish border, tells me that she navigates daily police checks in her home city. “I can’t go out alone because I’m scared of being arrested and killed for no reason. I do not have the right to ride bicycles and eat ice cream outside because I’m a woman and they say it’s inappropriate for women. When I go out with my older brother I have to take my ID card because the police may stop us and ask about our relationship. I have to prove that I’m his sister.” She speaks to UnHerd at great personal risk. The threat of arrest governs every detail of her life.

Even if women in Iran are liberated from the obligation to wear a headscarf, Kurdish women will not automatically be afforded the same rights and advantages of their more affluent Persian counterparts. While the protests in Iran are viewed internationally as a gender movement, for the minorities who started them, they represent something different. “As Kurdish women, we don’t just want to go without headscarves, we need to be recognised as human beings, and have the same rights as other human beings in democratic countries,” Susin told me. “The regime blames all its problems on Kurdish people.”

Indeed, it seems that Kurds are paying a high price for protesting. During the first 15 days of 2023, according to Hengsaw, at least 96 citizens have been arrested, including 13 children. The regime has also evoked an old trope, representing Kurds as conniving actors working for foreign governments by alleging that they are working with the US to destabilise Iran. Susin tells me that anti-Kurdish propaganda is everywhere now. And, more terrifying still: because of the role Kurdish women have played in the protest movement, they are now the focus of a harsh government crackdown. “Because of the recent protests, the regime is putting more pressure on Kurdish girls and women everywhere — in the malls, in the bazaar, at school and in the universities. It’s very scary: we don’t feel safe anywhere. The regime has already killed and arrested many Kurdish women who participated in the protests. They continue to arrest women in their homes. I’m always scared.”

The support of apparently liberal Persians feels empty to Susin — who, like Jina, was given a Persian name because her parents weren’t allowed to register her birth under the Kurdish one they chose. “On social media and TV, they claim they love and recognise us. They say they support Kurds, but I’m not convinced. For example, they are not even ready to say Jina’s real Kurdish name, and they keep on saying the Persian name forced on her by the regime.”

Unsurprisingly, many Iranian Kurds would like to be able to rule themselves — either in an autonomous Kurdish region with its own governance and laws, similar to Iraqi Kurdistan, or in an independent new nation. Kurds continue to sing the unofficial national anthem of greater Kurdistan at the protests — a fact largely ignored by the wider Iranian movement. Little wonder, given the lyrics include:

“Kurds have a reputation for being stubborn and sticking up for ourselves,” says Beri Shalmashi, a Kurdish writer and director. Shalmashi is concerned, however, that these protests have been hijacked. More attention is being given to famous feminist activists like Masih Alinejad, who has been cosying up to the Pahlavis, than the minorities most in danger. “We need to be included in this movement; as Kurds, we started it.”

It seems her fears are legitimate. The dominant mantra of the protests, “Jin Jiyan Azadi”, is now, in some pro-Shah circles, being cited as a historically Persian phase. In fact, the slogan’s origin couldn’t be further from the Shah’s family, exiled in affluent London suburbs. “Jin Jiyan Azadi” was born in the towns and villages of Mesopotamia, the product of a guerrilla group widely regarded as terrorists, the Kurdish Workers Party (or PKK). It is their imprisoned leader, Abdullah Ocalan, who is credited with creating the slogan; Shalmashi argues that its translation and co-option by Persian elites is a symptom of their erasure of Kurdish culture. (At the moment, the Kurdish language is suppressed in Iran and Kurdish schools are forbidden. Several women were arrested last year for teaching Kurdish lessons.)

“I feel like if the starting point is truly, ‘Iran is a mixed country’, they should not be afraid to use the words in Kurdish or English,” says Shalmashi. “But if you use it in Persian, without acknowledging the current illegality of our language and oppression of Kurds, you’re cheapening everything this revolution is supposed to be about.”

As images of women in Iranian malls without hijab float around social media, applauded by Western liberals, Kurds feel they have been erased from their own revolution. Superficial changes in hijab might sate the demands of wealthy Tehranis, but what Iran’s minorities need are sweeping structural changes. Shalmashi tells me that women in the mountainous Kurdish enclave where Jina Amini grew up are wondering whether the revolution their daughter created will dissipate once rich Iranian women are free to walk Tehran’s uptown malls in couture fashion:

“There is positive change, but will it last? The needs of women in Kurdistan are different to that of a woman in uptown Tehran. Women should not be satisfied with just the removal of headscarves. People need to go to the core of what is unjust in the Iranian system. Kurdish and minority women have the same fear: that they will be erased and forgotten from these protests and their oppression will continue.”