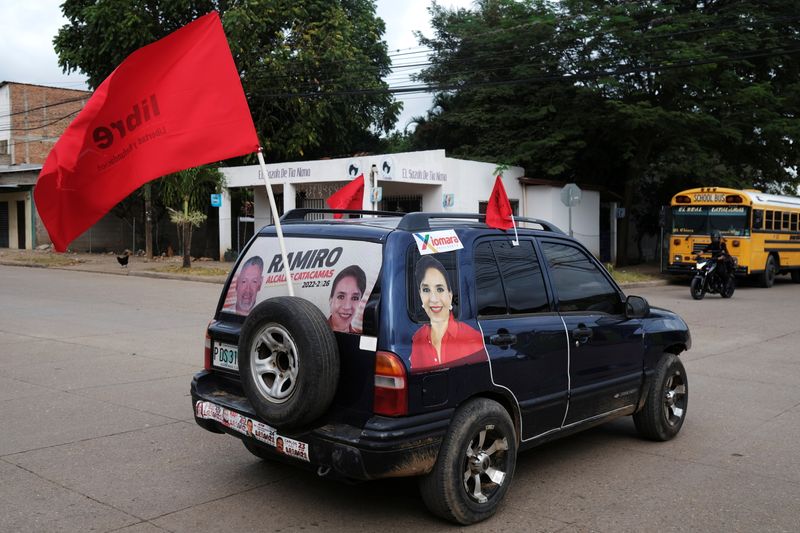 Pictures of Xiomara Castro, presidential candidate for the opposition Libre Party, are seen on a car prior to the November 28 general election, in Catacamas, Honduras November 27, 2021. REUTERS/Jose Cabezas

TEGUCIGALPA (Reuters) – Hondurans headed to the polls on Sunday to pick a new president, with leftist candidate Xiomara Castro hoping to oust the right-wing National Party, whose 12-year rule has been beset by graft scandals, chronic unemployment and waves of fleeing migrants.

If she wins, Castro would become the country’s first woman president and would mark the left’s return to power for the first time since her husband former President Manuel Zelaya was deposed in a 2009 coup.

She has gained favor from voters for her efforts to consolidate opposition to outgoing President Juan Orlando Hernandez, who has denied accusations of having ties to powerful gangs, among other corruption scandals. Recent voter surveys reinforced her status as favorite to win.

The election is the latest political flashpoint in Central America, a major source of U.S.-bound migrants and key transit point for drug trafficking, and where concerns over increasingly authoritarian governments have grown.

Castro’s main rival is the National Party’s Nasry Asfura, a wealthy businessman and two-term mayor of the capital Tegucigalpa who has tried to distance himself from the unpopular incumbent.

Wide-spread reports of irregularities provoked deadly protests claiming the lives of over two dozen people, but Hernandez’s election win was ultimately rubber-stamped by allies on the electoral council. Days later, it was vouched for by the government of then-U.S. President Donald Trump.

A large number of national and international election observers are set to monitor Sunday’s voting, including an 80-person delegation from the Washington-based Organization of American States led by former Costa Rican President Luis Guillermo Solis.

“The voice of the Honduran people must be respected and the process must not lead to acts of violence,” Solis told Reuters.

Some 5.2 million Hondurans are eligible to vote.

The pre-election tension was showing in some Tegucigalpa neighborhoods late Saturday, as some businesses boarded up storefront windows, and at least two auto dealerships located in an area near the president’s offices had emptied their lots of cars. The neighborhood has been the scene of raucous protests in the past.

Since primary elections in March, political violence has already claimed 31 lives, including local candidates and activists across all three major parties: Castro’s Libre Party, the National Party, as well as the centrist Liberal Party.

The latter was once part of a long-standing two-party duopoly along with the National Party, but has fallen to a distant third place in most polls. It’s presidential candidate is Yani Rosenthal, a former cabinet minister who only recently returned to Honduras after serving a three-year prison term in the United States after pleading guilty to money laundering.

In addition to the presidential race, voters are also deciding the composition of the country’s 128-member unicameral Congress, plus officials for some 300 local governments.

Polls open at 7 a.m. and close at 5 p.m but could be extended one hour depending on lines. Preliminary results are expected around 9 p.m.