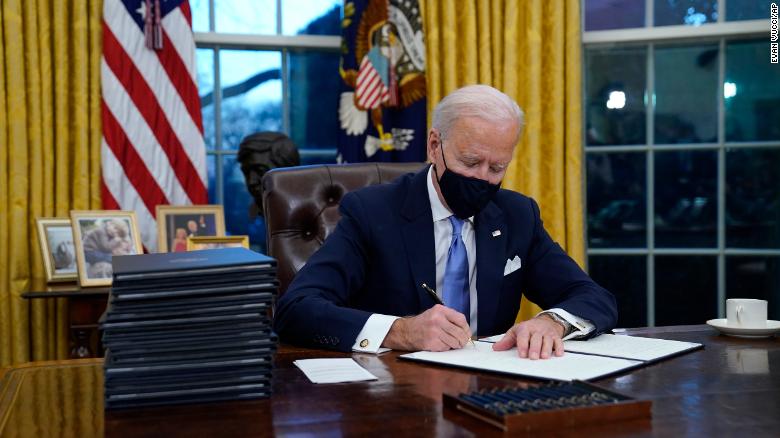 President Joe Biden signed a flurry of executive actions in his first 100 days in office, primarily aimed at curbing the coronavirus pandemic and dismantling many of former President Donald Trump’s policies.

In his first 100 days in office, Biden signed more than 60 executive actions, 24 of which are direct reversals of Trump’s policies.

Biden has defended the number as necessary to undo what he considers “bad policy” inherited from Trump, especially on immigration.

To date, 10 of his 12 actions on immigration are reversals of Trump’s policies.

“And I want to make it clear — there’s a lot of talk, with good reason, about the number of executive orders that I have signed — I’m not making new law; I’m eliminating bad policy,” Biden said as he signed a series of actions on immigration from the Oval Office on February 2. “What I’m doing is taking on the issues that — 99% of them — that the president, the last president of the United States, issued executive orders I felt were very counterproductive to our security, counterproductive to who we are as a country, particularly in the area of immigration.”

Most of Biden’s executive actions introducing new policy have been aimed at combating the novel coronavirus, while he has primarily targeted Trump’s immigration policies for reversals.

So far, Biden has signed more executive orders and memorandums than any of the last three presidents, when comparing how many each had published in the Federal Register through April 30 of their first year in office. These do not include corrections or clerical memos, which include delegations, designations and certifications.