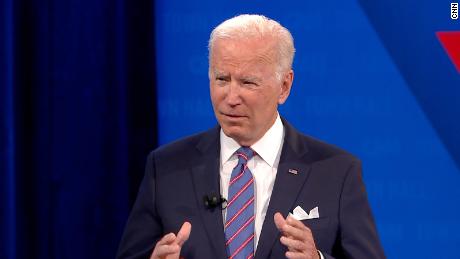 Share
Tweet
Share
Share
Email
Comments
Heading into the prime-time event, the President needed to stabilize a White House that seemed overtaken by events several times in recent months — from the Covid-19 Delta variant surge to the Afghanistan withdrawal. It was vital for him to recapture the impression of competence that resonated from his presidential campaign at a time when then-President Donald Trump was bungling the fight against Covid-19.
Overall, Biden appeared to do his stalled Washington agenda considerable good, and completed some handy repair work on a presidential image badly scarred by a wretched summer that dented his approval ratings. The President also kindled the hopes of liberals by suggesting an openness in the future to amending the Senate filibuster rule, which Republicans use to strangle the most sweeping Democratic reform measures.

He did detonate new controversies over China and on the administration’s blind spot over record arrivals of undocumented migrants at the southern border and he raised new questions about his command of a supply chain crunch.
But at its most basic level, presidential politics is about character. Successful presidents must show control, authenticity and empathy for the struggles of the people that they lead. Biden came across as humble, decent and humane — in his element with the audience. His self-deprecation was in stark contrast to the constantly boastful persona and raging victim-complex of his predecessor and was one of the keys to why he beat Trump last year.
Biden also made a somewhat belated effort to sell the country on his infrastructure and social spending agenda, with which much of the nation is largely unfamiliar. After days of behind-closed-doors negotiations, he gave a fascinating glimpse into the tough negotiations and painful compromises that will have to be made to pass the measures. He put meat on plans for social care spending, and explained why free community college and vision insurance might be dropped in order to build a majority to pass the measure.
The President had to make progress in finally bringing progressives and Senate moderates together to seal a deal on the pared down agenda he must thread through the eye of a 50-50 Senate majority and tiny edge in the House. The next few days in Washington will show whether he succeeded.
Biden has been mostly out of sight for days. His promised travel blitz to convince the country of the merits of the most ambitious social overhaul in generations barely got off the ground. But with his skill for talking to voters face-to-face on display on Thursday night, some supporters may wonder why the President doesn’t get out more and do what he does best.
“I think he did pretty well. He is always good at expressing support for people who are struggling and working hard out there,” David Axelrod, a former strategist for President Barack Obama and a senior CNN political analyst, said. 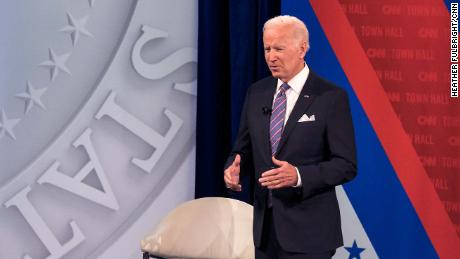 The President was also under intense pressure Thursday to convince a key constituency — African American voters — that he could still deliver for them after they sent him on his way to the presidency. One questioner in the audience beseeched Biden to do more to save voting rights legislation blocked again in the Senate on Wednesday by Republicans. In response, Biden — who appeared to be wrestling between his conscience and the needs of political strategy — went further than he had before in suggesting he could eventually be open to changes to the Senate filibuster.
He strolled the stage, deep in thought, before suggesting he could be open to reshaping the Senate on voting rights and even more issues. It’s a tough ask since several Democratic senators are opposed. And with characteristic honesty, Biden said he could not push for the move until he got his two big bills passed. If it happens, it will be huge news.
But that issue, along with details about the spending plans and Capitol Hill procedure, was mostly inside baseball for Washington power players, although an answer on Taiwan will have rattled some officials in Beijing.

Biden makes himself some room in negotiations

Joking that he had been a senator for 370 years before becoming vice president in 2009, Biden showed the political skills that might pull his ambitious legislative plans back from the precipice of defeat. After being locked in negotiations with fellow senators for days, he was still able to put across the human impact of his bills in an understandable form for an audience of non-politicians. He drew analogies with his own long middle-class life.
He also offered the most concrete predictions that weeks of deadlock between progressives could actually yield a deal, which would open the way for both bills and one of the most expansive Democratic presidential legacies in years.
But Biden also gave himself political room for maneuver. While progressive Democrats have spent days slamming West Virginia Sen. Joe Manchin and Arizona Sen. Kyrsten Sinema for balking at the $3.5 trillion cost of the social infrastructure plan, Biden praised both lawmakers. He was disarmingly frank about the reasons why Manchin opposes global warming programs that could hasten the eclipse of coal mining in his state and why Sinema is against tax rate hikes.
In a rueful aside that encapsulated his grinding legislative quest, Biden quipped: “When you are in the United States Senate and you’re President of the United States, and you have 50 Democrats, every one is a president. So you gotta work things out.” 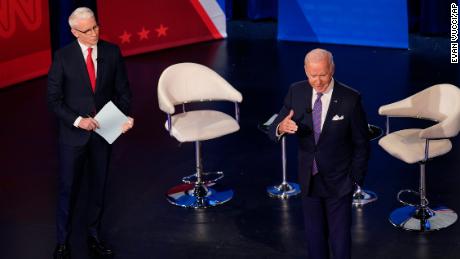 One of the reasons that Biden is a sometimes unintentionally fascinating political figure is that his natural candor, and tendency to fire off unguided rhetorical missiles, makes his appearances a high-wire act. He got his tendency to create gaffes under control in a highly scripted presidential campaign. But it’s always lurking in the background, and on Thursday he offered a number of instantly damaging remarks that will embroider the Republican narrative that the 78-year-old President is out of his depth, and oblivious to some of the biggest challenges facing the nation.
At one point, Biden suggested that he would be open to calling in the National Guard to help alleviate a supply chain crunch that has clogged ports, spiked inflation and emptied shelves in some supermarkets. “Yes, absolutely, positively. I will do that,” Biden told CNN’s Anderson Cooper.
But the White House quickly cleaned up the remark, telling journalists that it was not actively considering a step that was under the purview of governors.
In another gift to the GOP, Biden tried to navigate out of a question about the crisis on the US-Mexico border and delivered a soundbite that could soon be filling attack ads designed to fire up the Trump base.
“I guess I should go down but the whole point of it is, I haven’t had a whole hell of a lot of time to get down,” Biden said.
And not for the first time, the President appeared to trample the long-held doctrine of “strategic ambiguity” that cloaks US intentions should the self-governed island of Taiwan come under attack by China.
Asked twice during CNN’s town hall whether the US would protect Taiwan if China attacked, Biden said it would. “Yes, we have a commitment to do that,” he said.
Again, the White House was quick with a clarification over remarks that came at a time of alarmingly rising tensions with Beijing. An official said Biden was not announcing any change in the policy. Under US agreements with Taiwan, the US is bound by law to offer the island the means of self defense. But it never says how it would respond to a Chinese invasion — partly to deter any declaration of independence in Taipei. The issue has taken on fresh resonance following rising intimidation tactics by Beijing.
Still, the White House had plenty to be satisfied about after Biden’s appearance. His presidency has always been about his character and restoring the soul of the nation after the eruptions of the Trump years.
And the President demonstrated the humanity that is key to his connections with those Americans who like him — despite his faults — in an answer about the pandemic, the one issue that is most likely to define his presidency.
“I get asked the question: ‘What’s Christmas going to be like? How about Thanksgiving? Is it going to be OK? I mean, what’s going to happen? Will I be able to buy gifts for my kids?’ There’s a lot of anxiety people have.”
Another president might not have raised a question he is not yet fully able to answer. But millions of Americans are thinking the same thing.