Share
Tweet
Share
Share
Email
Comments
“There’s no evidence, as has been said on January 7, that this was an armed insurrection,” Gohmert claimed, echoing an eye-popping claim that’s also been made by Republican Sen. Ron Johnson of Wisconsin. Gohmert continued, saying: “Armed meaning with firearms. There were no firearms.”
Gohmert’s claims on the floor ignored the other weapons that were used and confiscated by police, and that one of the first individuals to face federal charges following the insurrection was charged with one count of carrying or having access to firearms or ammunition on US Capitol Grounds, according to the complaint sworn by an officer with the Metropolitan Police Department.
CNN has also reported that prosecutors said they believe paramilitary Trump supporters discussed transporting guns across the Potomac River into Washington, DC.
“There have been things worse than people without any firearms coming into a building,” Gohmert also said on Friday.
The Justice Department has documented supporters of then-President Donald Trump brought dozens of weapons to Washington on the day of the insurrection. Confiscated weapons — like a baseball bat, a spear, chemical irritants, knives and other items — had been seen being used inside the US Capitol and many of these were used to attack police officers protecting the building. 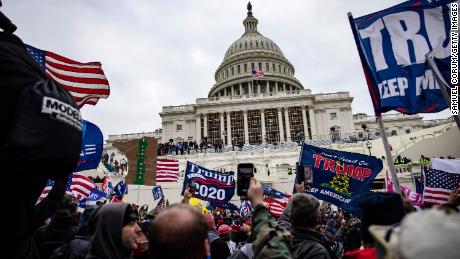 Gohmert also pushed unfounded allegations against the FBI and the Justice Department for “unfairly” going after Trump supporters in their investigation into the insurrection.
“Where is the outrage about young people being unfairly treated? … Joe Biden’s Justice Department is criminalizing political protest,” Gohmert claimed, despite the well-documented and violent takeover of the Capitol that occurred on January 6.
Gohmert’s long-winded speech lasted roughly an hour and covered a wide breadth of other perceived wrongs.
Asked why he was downplaying the events of January 6, Gohmert told CNN, “Any violence should not be downplayed. But people who are not engaged in violence should not be charged with crime.”
Asked if he thought Trump supporters were the ones in the Capitol, Gohmert responded: “Did you advocate for the Democrats to be charged with obstructing session?”
The Justice Department has charged at least 400 hundred people with crimes related to the violent insurrection that forced lawmakers into lockdown, halted the counting of the electoral college votes for more than five hours, and left more than 100 police officers injured while they protected the building from the violent mob.