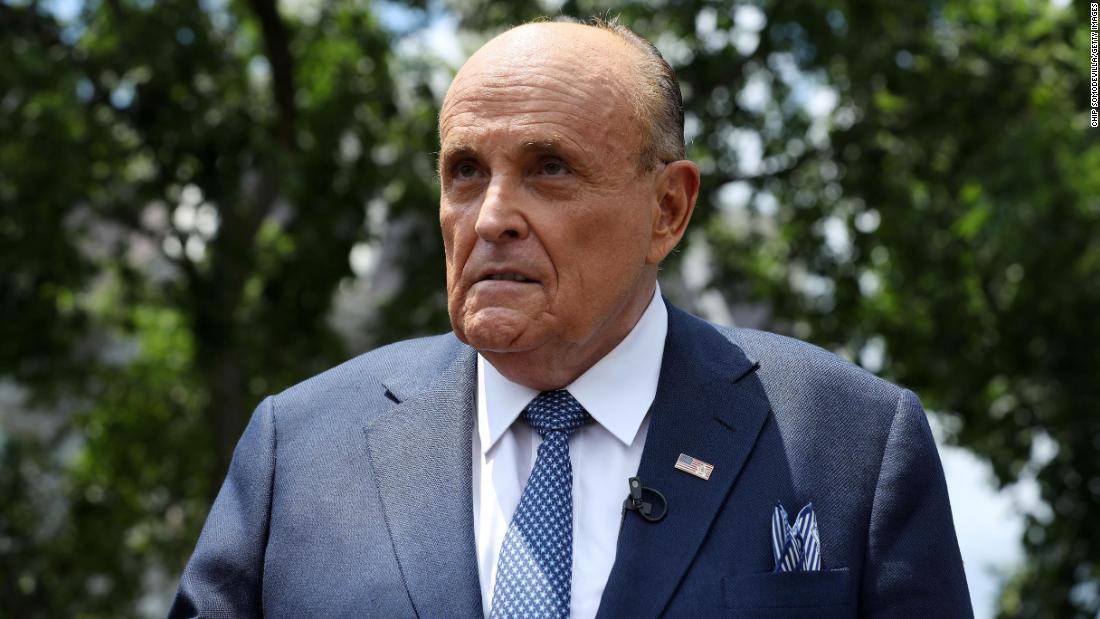 Lawyers for Giuliani, who served as former President Donald Trump’s personal attorney, filed the letter in response to prosecutors’ request for a “special master” — or independent review — of the material seized from his properties to determine whether it contains documents subject to attorney-client privilege.
Giuliani has been the focus of an investigation concerning his activities in Ukraine, including whether he conducted illegal lobbying for Ukrainian officials while he pursued an investigation linked to Trump’s primary political rival, President Joe Biden, CNN has reported. Giuliani hasn’t been charged and has denied wrongdoing.
In their letter unsealed Monday, Giuliani’s lawyers told a judge they should be able to review the iCloud search by having the court unseal the affidavits filed in support of the warrant, allow them to question the government about a non-disclosure order in the iCloud warrant saying “if Giuliani were informed of the existence of the warrant, he might destroy evidence or intimidate witnesses” and give them access to the material gathered in 2019.
“After our review, we expect to be able to expand our argument that this unilateral, secret review was illegal,” they wrote, “and should be deterred in the future by suppression of any evidence considered, and also any information obtained as fruit of this poisoned tree.”
A spokesman for the Manhattan US Attorney’s office declined to comment on Giuliani’s lawyers’ assertions.
When prosecutors searched the former New York City mayor’s iCloud account, Giuliani’s lawyers wrote, “the government unilaterally reviewed all the information, privileged and not, and made entirely uninformed decisions about privilege (without any input from the clients or their counsel). This was during a period when the President was under investigation by that very office and the Justice Department of which they are an integral part.”
Giuliani’s lawyers also wrote that the searches were unwarranted because their client “had already cooperated with the US State Department (‘State’) through Mike Pompeo, the secretary of state, in March 2019 concerning Ukraine. He also cooperated again in July and August of 2019 at the request of the State Department in assisting them with regard to Ukraine.”
The attorneys told US District Judge Paul Oetken that on November 4, 2019 — the day, they later learned, that prosecutors sought the iCloud warrant — they told prosecutors that Giuliani would answer questions, except regarding privileged material, as long as prosecutors informed him in advance of the subject matter.
Despite those offers of assistance, Giuliani’s attorneys wrote, prosecutors “simply chose to treat a distinguished lawyer as if he was the head of a drug cartel or a terrorist, in order to create maximum prejudicial coverage of both Giuliani, and his most well-known client — the former President of the United States.”
And though prosecutors used a “filter” team in the 2019 iCloud search, Giuliani’s lawyers wrote, that step likely wasn’t sufficient to identify all of the privileged material in his account.
His iCloud account, they said, “certainly had communications with, and on behalf of, the sitting President, containing material relating to the impending impeachment, the welfare of the country, and to national security. Given the complexity of Mr. Giuliani’s personal and professional relationships and the related communications, it is a near impossible task to accurately list all individuals with whom Mr. Giuliani had a privileged relationship or communications.”
In a separate letter to the court, a lawyer for attorney Victoria Toensing, a Giuliani ally whose cell phone was seized pursuant to a search warrant the same day Giuliani’s home and office were searched, said authorities covertly seized electronic data from her Google and Apple iCloud accounts in late 2019 and that as a result it is “virtually certain” that prosecutors received privileged material relating to her clients.
Toensing and her husband, Joseph diGenova, signed an agreement with a Ukrainian prosecutor as part of an effort to collect information about Biden’s activities in Ukraine while he was vice president, according to the House Democrats’ 2019 impeachment report.
In his letter, Toensing’s lawyer, Michael Bowe, drew a distinction between his client and another former lawyer for former President Donald Trump, Michael Cohen, who balked when authorities seized material from his properties in 2018, saying the documents were subject to attorney-client privilege.
“In the case involving Mr. Cohen, the Government made much of the fact that Mr. Cohen ‘admits that he has only three legal clients,'” Bowe wrote. “In fact the Government even joked that Mr. Cohen has ‘more attorneys of his own than he has clients,'” Bowe noted, adding that “[o]n the other hand, Ms. Toensing is a respected criminal defense attorney who, over the court of the past three decades, has represented and currently represents many high-profile, international political figures.”
In Cohen’s case, a judge appointed a special master to review privilege questions. The special master ultimately determined that only a small portion of the material seized was subject to privilege and thus withheld from prosecutors.