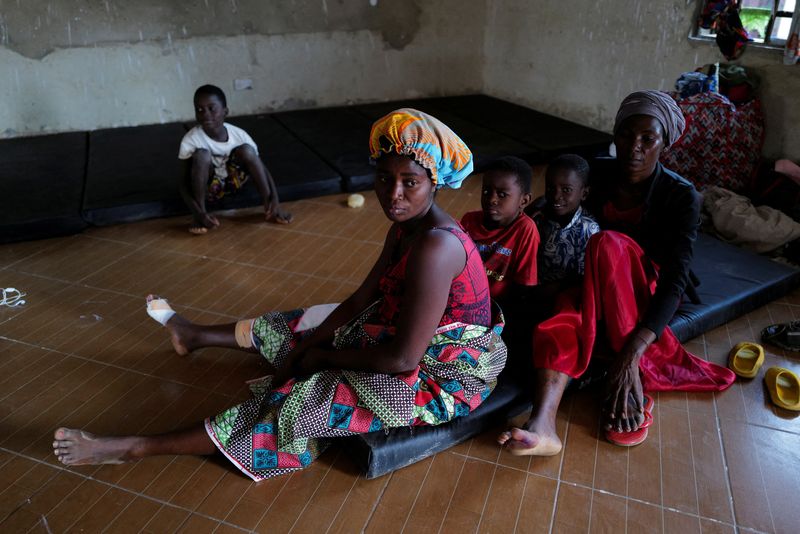 Diana Essandoh, 25, whose husband died in an explosion when carrying mining explosives detonated along a road in Apiate, sits with her children and mother-in-law, at a shelter for displaced victims in Bogoso, Ghana, January 22, 2022. REUTERS/Francis Kokoroko

By Cooper Inveen and Francis Kokoroko

APIATE, Ghana (Reuters) – Nancy Nyarko was preparing porridge at her roadside stall near the edge of the village of Apiate in Ghana’s western mining region when she heard a loud noise close by.

Looking up, she saw a motorbike had collided with a large truck and caught fire, Nyarko said, her right hand and left leg wrapped in bandages.

The crash happened at 13:25 on Jan 20. In less than an hour Apiate was reduced to a wasteland of rubble, timber and twisted metal, a 20m (65 ft) crater yawning at its core from an explosion. At least 13 people were dead and nearly 200 injured.

What residents didn’t know was that the truck, owned by the Spanish company Maxam, contained 10 tons of explosives meant to blast rock in the Chirano gold mine, run by Toronto-based Kinross Gold Corporation, around 140 km (87 miles) further north.

The explosion exposed the risk of transporting mining goods in poor areas with limited emergency response.

The truck was on fire for 45 minutes before the blast, in which time residents were allowed to walk to the scene to take photos and video without police or firemen holding them back, eight eye witnesses said.

Survivors were left with cuts and lingering questions about extent of safety precautions and the speed and effectiveness of the authorities’ response.

“The truck stopped and the driver got out and started waving,” Nyarko said.

“He ran into a shop and told the people to get out. I couldn’t hear him from where I was but I could see him gesturing for people to get away, so I also decided to leave,” Nyarko said.

Ghana Police spokesman Kwesi Ofori told Reuters the truck had been escorted by a Maxam car with a flashing security light in front, and a police car behind.

A police document, shared by Ofori, showed the escort was carrying 10 tons of explosive and signed off by the regional command in Tarkwa on Jan. 19. The truck driver and policeman told a nearby school to evacuate its pupils and a fuel station to shut down, Ofori said.

“When he saw what happened, the policeman quickly reversed far away and started alerting people to be careful about what was happening,” Ofori said.

“The escort police also alerted the fuel station and they shut. That also could have been a major disaster,” Ofori said.

Nancy and seven other witnesses of the accident said they did not recall seeing a police escort and a Maxam car with a flashing light, or that a policeman helped warn the villagers.

The manager of the GOIL fuel station, Fred Antwi, said he did not speak to any police officers, and police from the station in Bogosoro, around a mile away, didn’t arrive until after the blast.

“WE CALLED AND CALLED”

Maxam did not respond to a request for comment. A Kinross spokesperson said the vehicle was under the sole supervision of Maxam.

Kojo Oppong Nkrumah, Ghana’s minister of information, said police had initiated an inquiry into the sequence of events and facts surrounding the incident.

Many villagers fled but, as videos shared on social media show, curious spectators walked towards the flames.

At least eight witnesses said the truck was burning for 45 minutes before it exploded. Police said the interval between the crash and blast was 15-20 minutes.

“I spoke with the driver as he tried to call the fire service,” said Kwame Mensa, his face patched with plasters.

“He kept saying something was about to happen. We called and called, but by the time they came, the worst had already happened.”