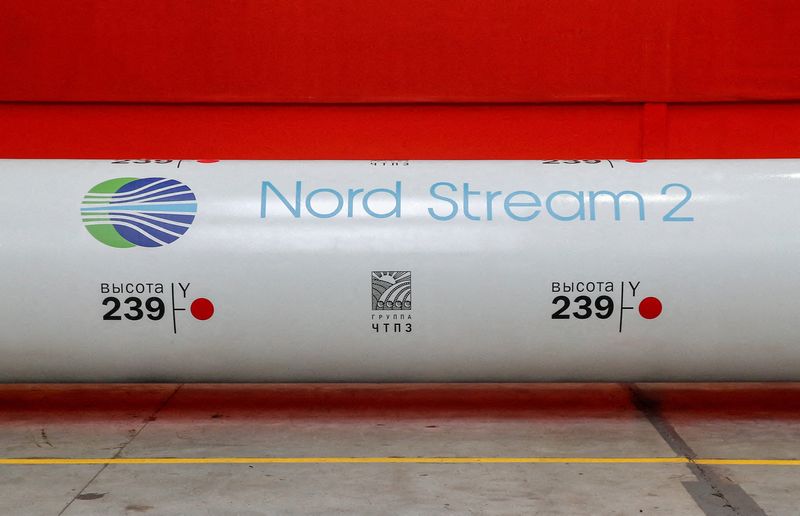 FILE PHOTO: The logo of the Nord Stream 2 gas pipeline project is seen on a large-diameter pipe at the Chelyabinsk Pipe Rolling Plant owned by ChelPipe Group in Chelyabinsk, Russia, February 26, 2020. REUTERS/Maxim Shemetov

BERLIN (Reuters) – Germany cannot rule out using the Nord Stream 2 pipeline as a means of pressure against the Kremlin in case of further Russian aggression towards Ukraine, a senior official from the party that leads Germany’s coalition government told broadcaster ARD on Tuesday.

German Chancellor Olaf Scholz, who also represents the Social Democratic Party (SPD), has repeatedly said Nord Stream 2 was a purely private sector enterprise and out of the state’s regulatory reach.

“If we should really come to sanctions, and I still hope we will be able to avoid that, then we cannot rule out in advance things that may be demanded by our partners in the European Union.”

The Nord Stream 2 gas pipeline, already built but not yet approved for operation, is intended to bring more Russian gas to Western Europe, but opponents of the project, including Ukraine and the United States, argue it would make Europe too dependent on Russia.

Scholz had said on Monday that Russia would have to reckon with political and economic consequences in the event of an attack, but did not give further details.

On Monday evening, the British government sent a military plane with anti-tank weapons to Ukraine. Germany’s Defence Ministry denied the flight route around Germany was due to a lack of flyover permits.

Previously, there had been speculation on social media that Germany might have rejected British flyover requests as Scholz and Baerbock had repeatedly refused to supply arms to Ukraine.