Russian missiles, artillery and drones have hammered targets in eastern and southern Ukraine, as global economic powers pledged to beef up Kyiv’s military capabilities with a focus on air defences.

He also urged the G7 to help Kyiv obtain an extra 2 billion cubic metres of natural gas in light of Ukraine’s dire energy shortages as millions languish without power in subzero cold after further Russian air raids on critical infrastructure.

Separately, European Union foreign ministers agreed on Monday to put another 2 billion euros ($2.1bn) into a fund used to pay for military support for Ukraine, after it was largely depleted during almost 10 months of war. More top-ups may be possible at a later stage.

British defence minister Ben Wallace said on Monday he would be “open-minded” about supplying Ukraine with longer-range missiles to target launch sites for Russian drones that have hit infrastructure if Russia carried on targeting civilian areas.

In its regular daytime report on the military situation, Ukraine’s General Staff said its forces had repelled Russian assaults on four settlements in the eastern Donetsk region and on eight settlements in the adjacent Luhansk region.

The regions are two of four in eastern and southern Ukraine that Moscow claims to have annexed after “referendums” branded illegal by Kyiv.

Later in its evening update, the General Staff said Russian artillery had hammered nearly 20 front-line settlements around the eastern city of Bakhmut, which Moscow seeks to capture but is now largely in ruins due to incessant bombardment. 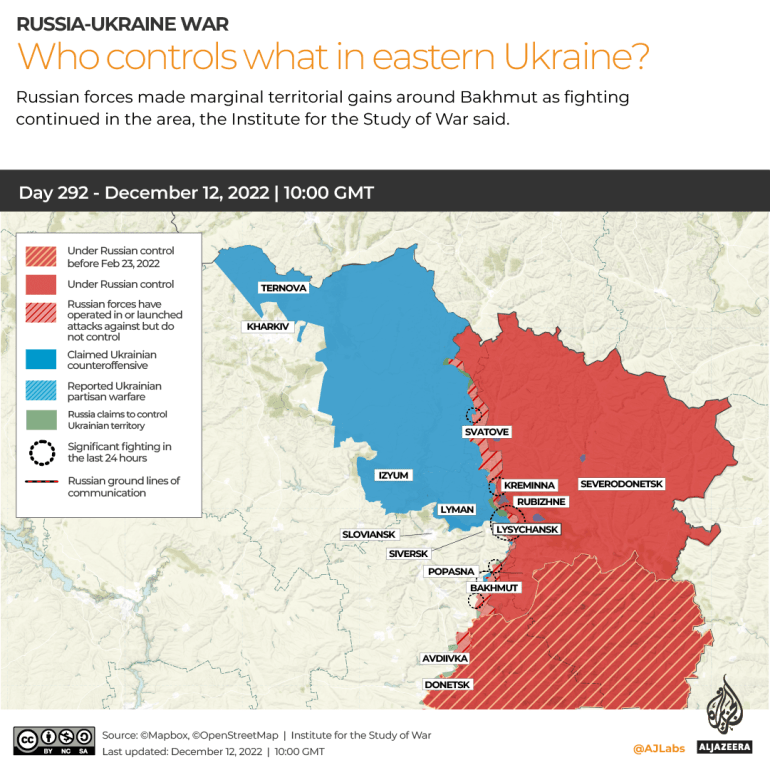 On Monday, a senior United States military official said Russia was burning through so much ammunition that it was turning to decades-old munitions with high failure rates.

At least two people were killed and five wounded in Kherson on Monday after what regional governor Yaroslav Yanushevych said was “massive shelling” by Russian forces of the southern city, which was captured by Ukrainian forces last month.

Meanwhile, the Kremlin said on Monday that President Vladimir Putin would not hold his annual, marathon-like year-end news conference this month, a televised event he has used to showcase his command of issues and stamina.

Zelenskyy said other areas experiencing “very difficult” conditions with power supplies included the capital Kyiv and Kyiv region, as well as four regions in western Ukraine and the Dnipropetrovsk region in the centre of the country.

United Nations aid chief Martin Griffiths arrived in Ukraine on Monday to see “the impact of the humanitarian response and new challenges that have arisen as infrastructure damage mounts amid freezing winter temperatures”, his office said.

“Unliveable conditions” are likely to send another wave of hundreds of thousands of Ukrainian refugees into Europe over the winter, Jan Egeland, head of the Norwegian Refugee Council, told the Reuters news agency.

Egeland said he feared the crisis in Europe would deepen and overshadow crises in other parts of the world.

About 18 million people or 40 percent of Ukraine’s population are dependent on aid, the UN says. Another 7.8 million have left the country for other parts of Europe.

The EU foreign ministers also discussed but did not reach an agreement on a ninth package of sanctions on Russia over the invasion, EU foreign policy chief Josep Borrell told reporters, though he hoped a deal would be clinched later this week.

US Treasury Secretary Janet Yellen told CBS’s “60 Minutes” Washington’s support for Ukraine’s military and economy — more than $50bn — would continue “for as long as it takes”.