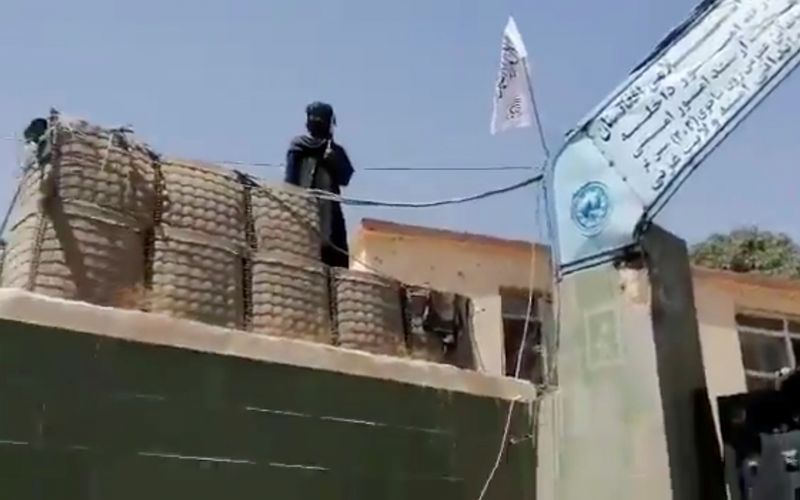 FILE PHOTO: A fighter stands guard next to a Taliban flag raised at the gates outside the police headquarters, in city of Ghazni, Afghanistan in this screen grab taken from a video released by the Taliban on August 12, 2021. Taliban Handout/via REUTERS

WASHINGTON (Reuters) – Leaders of the G7 advanced economies are expected to pledge unity on whether or not to officially recognize or sanction the Taliban when they meet virtually to discuss Afghanistan on Tuesday, according to two diplomatic sources.

U.S. allies are still smarting from Washington’s delays in outreach after Kabul fell on Aug. 15, and foreign diplomats in Washington said cooperation will be a key theme of the call.

“The G7 leaders will agree to coordinate on if or when to recognize the Taliban,” said one European diplomat. “And they will commit to continue to work closely together.”

The Taliban’s lightning-fast takeover of the country this month, after U.S. troops started to withdraw and President Ashraf Ghani fled, left foreign governments scrambling and sparked a panicked mass exodus from the country.

Leaders of the United States, Britain, Italy, France, Germany, Canada, and Japan may use the possibility of unified official recognition, or renewed sanctions to push the Taliban to comply with pledges to respect women’s rights and international relations.

Recognition is a political act taken by sovereign states with important consequences, including allowing the Taliban access to the foreign aid relied upon by previous Afghan governments. A 2020 agreement signed by the former Trump administration explicitly states that the group “is not recognized by the United States as a state.”

The tool of recognition is “one of the most important remaining pieces of leverage that we have,” said Annie Pforzheimer, a retired U.S. diplomat who served as the deputy chief of mission at the U.S. embassy in Kabul from 2017 to 2018.

It would be “infinitely more powerful” if it is well coordinated and ensures that the new government is inclusive and recognizes Afghanistan’s human rights commitments, she said.

G7 leaders will also discuss a possible extension of Biden’s Aug. 31 deadline for withdrawing U.S. forces, to give the United States and other countries more time to locate and evacuate Western citizens, Afghans who aided NATO and U.S. forces and other vulnerable people, the sources said.

Britain and France are pressing for more time, but a Taliban official said foreign forces had not sought an extension and it would not be granted if they did.

“The United States have over 6,000 people in Kabul airport and when they withdraw that will take away the framework that has allowed us to withdraw and we will have to go as well,” British Defense Minister Ben Wallace said on Monday.

G7 leaders will also commit to coordinate on any sanctions, resettlement of a wave of refugees, and concerns about possible attacks by Islamic State groups, the sources said.

The G7 will take stock of the current evacuation efforts and commit to coordinating closely on further steps, including security, humanitarian assistance, resettlement of refugees and potential sanctions, the sources said.

“We need to make sure that more funds are provided urgently for humanitarian aid,” German Foreign Minister Heiko Maas said on Monday. “I believe the G7 countries should live up to their responsibilities and find a response to mitigate the acute humanitarian hardship that’s already prevalent in the region and that will increase over the coming weeks.”

Biden told reporters on Sunday that the United States was already working with the Taliban to facilitate the evacuations, but that the Islamist group was “seeking legitimacy” in the longer term.

That meant it would need “additional help in terms of economic assistance, trade, and a whole range of things,” but the international response – including potential sanctions – would depend on their actions going forward.

(Reporting by Andrea Shalal; additional reporting by Kate Holton in London and Sabine Siebold in Berlin; Editing by Heather Timmons)