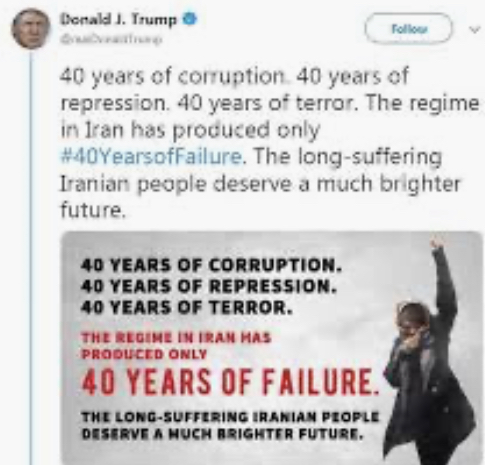 On Sunday, November 17, 2019, the Islamic Republic of Iran imposed an almost complete nationwide internet blackout, marking one of its most draconian attempts to cut off Iranians from each other and the rest of the world, as a wide-spread uprising pertaining to the massive increase in gasoline costs has swept the country. The simple betrayal and unlawful act of disconnecting the community from one another so that the people simply would not be able to organize and voice their displeasure with these actions has once again shown the democratic world that the brutal kleptocratic theocratic Failed Islamic State continues to impact all of Iran and its Diaspora.

Ayatollah Ali Khamenei, the Supreme Leader of the Regime, who has the last word on all matters, has called these peaceful demonstrators “thugs” and has authorized brutal attacks against unarmed civilian Iranian protesters across the country for simply rising up and making their voices heard on how the arbitrary increase of fuel costs is having a profoundly negative impact on the people’s pocketbooks. This action, during an elongated time of financial distress where people have been struggling to put food on their tables, being placed on the backs of the people due to the sanctions implemented on the country due to the Regime’s prioritization of its nuclear program over the fate of its people.

So far, unofficial reports indicate that the death toll has reached more than 158 in three days, and is expected to continue to rise; hundreds have been left with serious injuries without access to proper medical care; and more than 1,000 people have been arrested. These figures are spread throughout the country, indicating that everyone is affected and at risk within the boundaries of Iran.

Across the Diaspora, Iranians have called for a referendum on the re-establishment of the Iranian Constitution of 1906 and the restoration of the progressive White Revolution. Iranians have suffered for the past forty years and are looking to the United States for leadership and support, as the people behind the Iron Curtain did ahead of the fall of the Berlin Wall.

Throughout the world, Iranians certainly appreciate US Secretary of State Pompeo’s strong statement that “The Islamic Republic must cease violence against its own people, and should immediately restore the ability of all Iranians to access a free and open Internet. The world is watching.” We are now requesting that the US Administration take this statement one step further from simply “watching” to the action of rallying western democracies together to implement steps to force the Regime to allow Iranian citizens the opportunity to live in a free and truly democratically elected Iran with unfettered access to an uncensored internet.

Without witness documentation of the continued violence against the Iranian people, it will be difficult to hold the Islamic Republic accountable for its ongoing brutality and human rights abuses.

We Iranians are proud of our long history and in being strong allies of the United States and demand that our Motherland be integrated within the free world, like all other free nations.