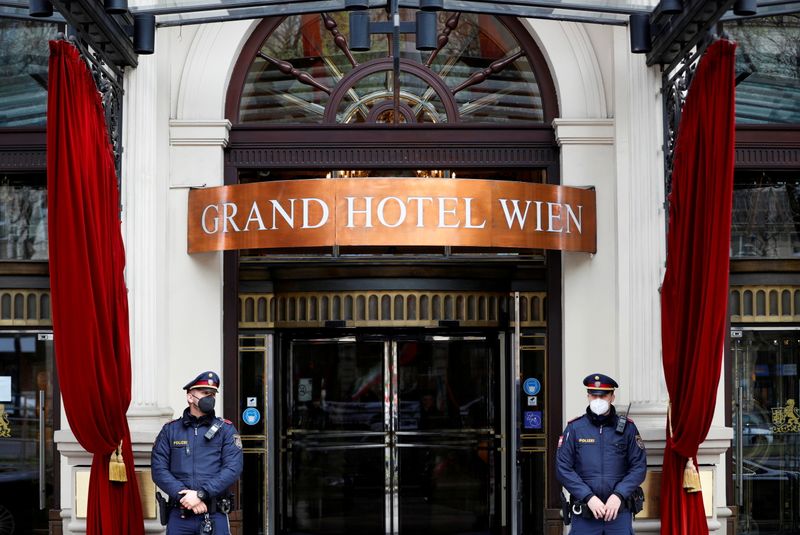 FILE PHOTO: Police stand outside a hotel where a meeting of the Joint Commission of the Joint Comprehensive Plan of Action (JCPOA), or Iran nuclear deal, is held in Vienna, Austria, April 20, 2021. REUTERS/Leonhard Foeger/File Photo

PARIS (Reuters) – France said on Thursday it could still act with its partners against Iran at an upcoming meeting of the U.N. nuclear watchdog’s board after Tehran said it would return to nuclear talks with world powers at the end of November.

Western powers scrapped plans in September for a resolution criticising Iran at the International Atomic Energy Agency after Tehran agreed to prolong monitoring of some nuclear activities and invited IAEA Director General Rafael Grossi to Tehran for talks on key outstanding issues.

The decision by the United States, France, Britain and Germany not to push for a resolution by the IAEA’s 35-nation board of governors avoided an escalation with Iran that could have killed hopes of resuming wider talks in Vienna on reviving the 2015 nuclear deal.

Iran and the European Union, which coordinates those negotiations, said on Wednesday that all sides had agreed to return to the Austrian capital on Nov. 29.

Western states have increasingly become frustrated that Iran has failed to fully honour a monitoring agreement with the IAEA, continues to breach its 2015 accord, and has yet to allow Grossi to come to Tehran for high-level talks that had been promised in September. It has also not properly addressed outstanding questions on past nuclear activities.

“Iran must resume dialogue and cooperation with the agency without delay to make progress on outstanding issues,” French Foreign ministry spokeswoman Anne-Claire Legendre told reporters in a daily briefing.

When asked whether Iran’s decision to return to the nuclear talks would make it unlikely that Western powers rebuke Tehran when the IAEA board holds it next quarterly meeting from Nov. 18, Legendre said Paris remained extremely concerned about Iran’s breaches of its obligations and commitments, including those made in September.

“Together with our partners, we remain very attentive to ensuring that Iran respects its commitments, and we remain in close consultation on the response to be provided on this,” she said.