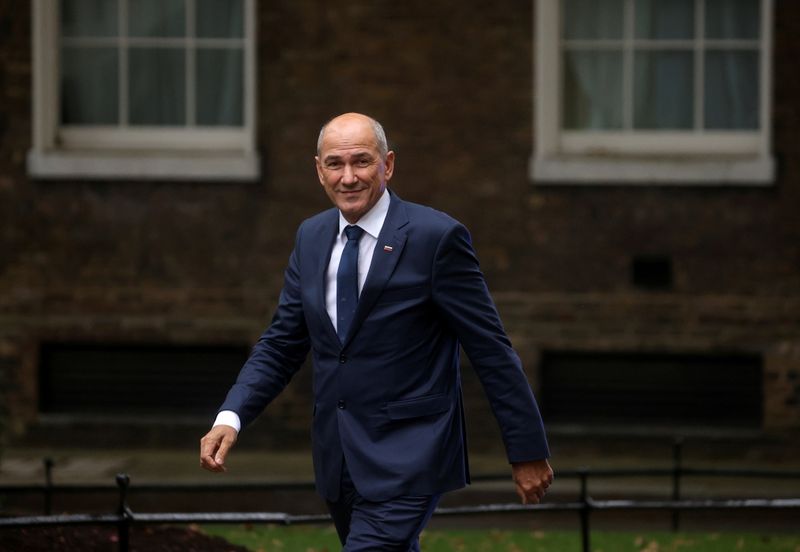 (Reuters) – A visit by European Union lawmakers to assess media freedoms in Slovenia has sparked a Twitter spat between the country’s prime minister and his Dutch counterpart, fuelling tensions over eastern members’ respect for the rule of law ahead of an EU summit next week.

Slovenian Prime Minister Janez Jansa denounced the delegation of eight lawmakers as they took stock of the rule of law situation, media freedom and the fight against corruption.

“Who are you? How many times have you visited a German chancellor, a Dutch prime minister or a French president?” Jansa tweeted on Thursday.

An admirer of former U.S. President Donald Trump and an ally of Hungary’s nationalist prime minister, Viktor Orban, Jansa has clashed with Brussels in the past over media freedoms.

Slovenia holds the EU’s six-month rotating presidency at a moment when there is increasing alarm in western European capitals about respect for the rule of law and freedoms in eastern European countries, especially in Hungary and Poland.

The bloc has held up disbursements from its post-pandemic recovery fund to Hungary and Poland because of feuding over Budapest’s approach to LGBTQ rights and Warsaw’s challenge to the supremacy of EU law.

“By the way, it’s (the) Netherlands where the last journalist was killed in the EU,” Jansa added in his tweet, referring to the murder of prominent Dutch reporter Peter de Vries in July.

Rutte called that tasteless, saying on Twitter that he condemned the comment “in the strongest possible terms” and had conveyed that message to Slovenia’s ambassador in The Hague.

Jansa retorted: “Well, Mark, don’t waste time with ambassadors and media freedom in Slovenia … protect your journalists from being killed on the streets.”

At a news conference in Ljubljana on Friday, Sophie in’t Veld, who headed the EU lawmakers’ delegation, said Slovenian institutions were working. But she added there were areas for concern, listing a funding squeeze for Slovenia’s press agency STA, a delay in the appointments of prosecutors and the tone of public debate.

“It is very striking that members of the government are engaging in a kind of debate which I think is unfitting for a civilised and democratic society,” the lawmaker said. “That kind of debate leads to a climate of distrust, hostility and intimidation,” said in’t Veld, a Dutch centrist.

European Council President Charles Michel, who will chair the Oct. 21-22 EU summit, said on Twitter the bloc’s parliamentarians “should be able to do their work free from any form of pressure”, but did not refer to the Slovenian leader.

Jansa’s Twitter tirade included a picture – later deleted – of “13 of the 226 known Soros puppets” in the EU parliament. Orban has long vilified Hungarian-born U.S. financier George Soros, who promotes liberal values through the Open Society Foundations and who is Jewish.

“Anti-Semitism has no place in the European Union…It presents a threat not only to Jewish communities but to an open and diverse society,” a spokesman for the EU’s executive Commission said when asked about Jansa’s tweet.

“Social media should … not be a place for personal attacks against individuals, be it private or public figures”.