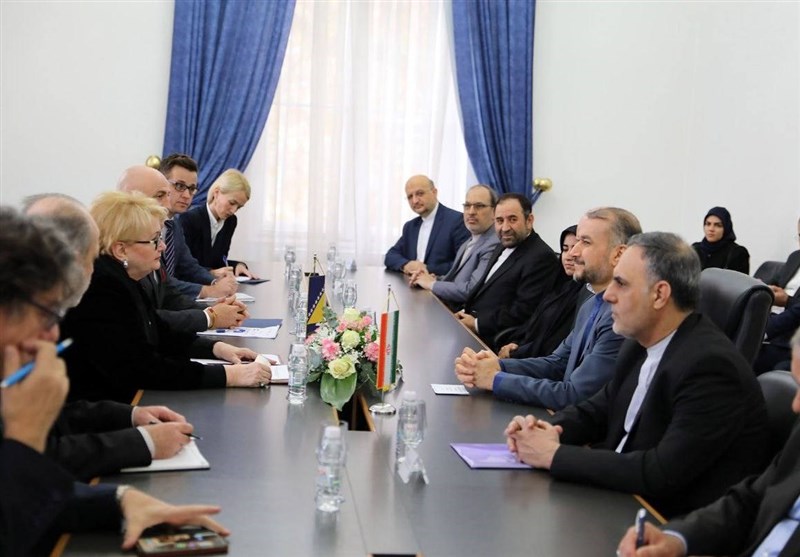 On the second leg of his trip to the Balkans, the Iranian foreign minister held talks with his Bosnian counterpart Bisera Turkovic in Sarajevo on Tuesday. The two sides exchanged views on issues of bilateral significance in the meeting.

Amirabdollahian also thanked his Bosnian counterpart for her message of sympathy in the wake of a recent terrorist attack that led to the martyrdom of innocent Iranians at the holy shrine of Shah-e Cheragh in Shiraz.

He said the ties between the two countries in various spheres were positive.

He highlighted the capacities for bilateral cooperation in the economic sector, especially agriculture, tourism and mining, adding that those areas need more attention based on the interests of the two states.

Amirabdollahian pointed to Iran’s geopolitical position on the North-South and East-West Corridors, expressing the Islamic Republic’s readiness to cooperate with Bosnia and Herzegovina in that regard.

He also briefed Turkovic on the latest developments in Iran and the schemes of the US and some European countries to support riots and pave the way for the dissemination of fake news about the internal situation of the Islamic Republic, the Foreign Ministry’s website reported.

For her part, the Bosnian foreign minister underlined that her compatriots will never forget the Islamic Republic’s precious assistance during the era of war, saying the situation would be different in Bosnia today if it were not for Iran’s help.

Besides bilateral issues, the two foreign ministers discussed the sanctions removal talks, the regional developments as in Palestine, Yemen and Ukraine, and international topics.