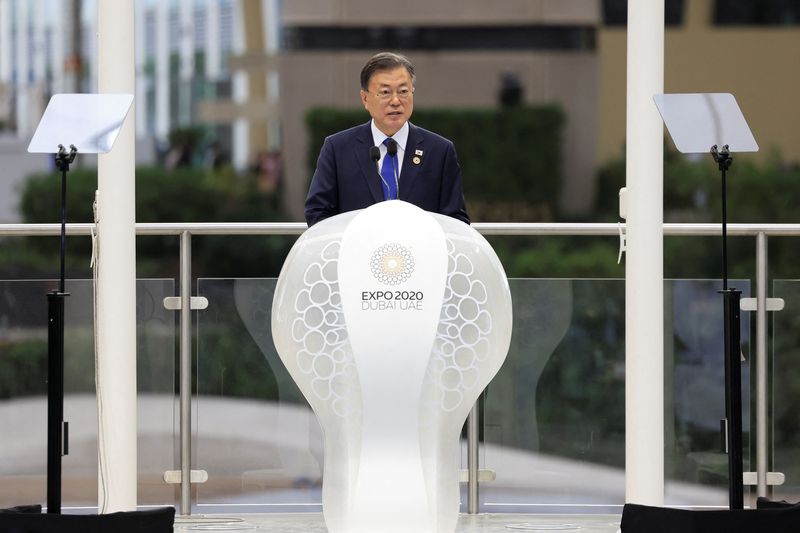 From North Korea summits to stalled talks and missile tests, from COVID-19 success to soaring home prices and corruption scandals, here are some of the issues at stake in the March 9 contest:

In Seoul and the wider metropolitan area, which is home to about half of South Korea’s population, the average price of an apartment has roughly doubled since 2017 to 1.26 billion won  ($1.05 million) in January.

The net effect of some 26 sets of measures Moon rolled out over the past five years to cool prices, including tougher mortgage curbs and capital gains taxes, have been aggravating the situation.

Discontent over the economic situation has driven away many young voters who initially backed Moon, according to polls. They comprise a lost generation that many see emerging as the key voting bloc that could swing this year’s presidential election.

One of the largest blocs to abandon Moon has been young men, who say the president’s calls for gender equality are out of date, and misplaced in a competitive environment where all young men must complete mandatory military service that they say puts them behind women.

South Korea’s gender wage gap is the largest in the OECD.

Corruption scandals have also made many younger South Koreans disillusioned with Moon’s ruling Democratic Party, and some even had a single word to sum up their disgust with political leaders who they perceive as hypocritical and inept.

As of June 2021, South Korea’s household debt-to-GDP ratio at 105.8% was one of the highest in the world and almost double the average among Group of 20 advanced nations.

South Koreans have been borrowing more than ever before and policymakers are increasingly worried the 1,845 trillion won ($1.54 trillion) debt pile could become unsustainable as interest rates rise.

An average of 173,000 jobs were created every year since 2017, government data showed, far short of Moon’s pledge to add more than 500,000 private sector jobs annually.

The minimum wage in South Korea has risen 41.6% to 9,160 won ($7.65) per hour this year from 2017, during which time manufacturers moved 180,000 jobs to offshore locations, data from the Federation of Korean Industries showed.

Moon faced an initial nightmare in early 2020 as South Korea became the scene of the first large-scale coronavirus outbreak outside of China.

A campaign of aggressive testing, tracing, and quarantines helped South Korea keep numbers in check and the death toll low, without major lockdowns.

A slow start to the vaccination campaign later made up for lost ground, but businesses have chafed under new rules imposed to curb a surge in Omicron infections, and Moon’s successor will be tasked with navigating how to live with COVID-19.

Moon avoided any major personal scandals, but his party’s standing took hits from a series of controversies that undermined his pledge to clean up the office after his predecessor was impeached and removed.

Cho Kuk, a key Moon aide, was forced to resign as justice minister after just one month in office amid accusations including bribery and document fraud.

The prosecutor who indicted Cho is now the leading conservative candidate for president in the upcoming election.

Polls show foreign policy issues such as North Korea are overshadowed by domestic concerns for most voters, but whoever wins the March 9 election will inherit a standoff that could worsen further as North Korea threatens to resume long-range missile or nuclear weapon tests for the first time since 2017.

Moon met North Korean leader Kim Jong Un in a rare summit at the countries’ fortified border in 2018, and played a major role in a flurry of diplomacy that saw Kim hold unprecedented meetings with then-U.S. President Donald Trump.

That all stalled, however, amid disagreements over the North’s nuclear weapons and its demands for sanctions relief, and in January North Korea conducted a record number of missile tests.