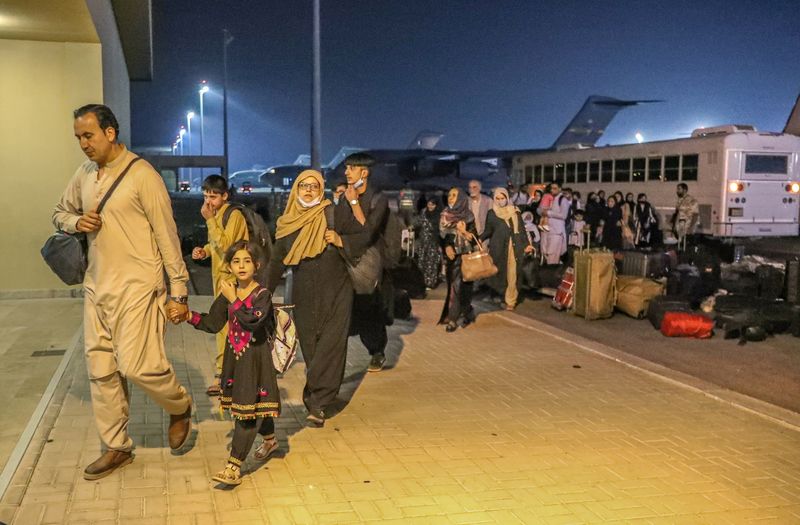 Evacuees from Afghanistan arrive at Al-Udeid airbase in Doha, Qatar in this recent undated handout. Government Communications Office of the State of Qatar/Handout via REUTERS ATTENTION EDITORS – THIS PICTURE WAS PROVIDED BY A THIRD PARTY. NO RESALES. NO ARCHIVES.

KABUL (Reuters) -Foreign powers sought to hasten evacuations from Afghanistan on Friday after reports of Taliban reprisals, including against people who had worked with U.S.-led forces or the previous Western-backed government.

More than 18,000 people have been flown out https://graphics.reuters.com/AFGHANISTAN-CONFLICT/KABUL-AIRPORT/zjpqkkwmypx/index.html since the militants took the capital Kabul, according to transatlantic alliance NATO, but Western governments are facing criticism for not anticipating such a chaotic exodus or helping enough.

Thousands of desperate Afghans clutching papers, children and some belongings still thronged Kabul airport where gun-toting Taliban members urged those without travel documents to go home. In and around the airport https://tmsnrt.rs/3stVpcj, 12 people have been killed since Sunday, NATO and Taliban officials said.

Such was the turmoil that no nation really knows which plane its citizens are on, while some people were caught in Afghanistan on family visits, a Dutch minister said.

“As of today, those who may be in danger have no clear way out,” U.N. High Commissioner for Refugees (UNHCR) spokesperson Shabia Mantoo said, urging neighbouring countries to keep borders open.

The speed with which the Islamist group conquered Afghanistan, as foreign troops were withdrawing, surprised even their own leaders and left power vacuums.

The Taliban called for unity, asking imams at Friday prayers to persuade people not to leave. Residents in Kabul and four other cities said attendance was low, though prayers passed off without incident.

However, a German civilian was wounded by a gunshot on the way to the airport before being evacuated, a German government spokesman said. And German broadcaster Deutsche Welle said Taliban fighters killed a relative of one of its reporters and badly wounded another in house-to-house searches.

Some Afghans have reported being beaten and having homes raided, while others say they have received reassurances. Taliban spokespeople were not immediately available for comment.

A witness said several people were killed in the eastern city of Asadabad on Thursday when a protest was fired on by the Taliban, who want to impose strict Islamic law.

There were similar shows of defiance in two other eastern cities – Jalalabad and Khost – coinciding with celebrations of the nation’s 1919 independence from British control.

“The Taliban are facing the new reality of Afghanistan that Afghans are not the same Afghans of 20 years ago,” Barakat Rahmati, Afghanistan deputy ambassador to Qatar, told Reuters.

“Afghans, inclusive of men and women, held protests in Kabul despite a Taliban gun being pointed to them. They are holding protests against injustice. They are defending their identity and their flag.”

Washington has about 5,800 soldiers controlling the airport but acknowledged it does not have a grip on how many U.S. citizens were in Afghanistan.

The United States was “laser-focused” on “the potential for a terrorist attack” by a group such as Islamic State during the evacuation, White House security adviser Jake Sullivan said.

U.S. President Joe Biden was set to speak about the evacuation at 1 p.m. (1700 GMT) on Friday, having faced a torrent of criticism https://www.reuters.com/world/us/bidens-afghanistan-policy-counts-issue-fading-importance-war-weary-americans-2021-08-20 for his handling of the troop withdrawal, negotiated by the previous U.S. administration of Donald Trump.

In Britain, media said several senior officials were on holiday as the Afghan debacle erupted and that spy chiefs may face a grilling over intelligence failings. Foreign Secretary Dominic Raab https://www.reuters.com/world/asia-pacific/uks-raab-defends-response-afghanistan-crisis-says-reporting-inaccurate-2021-08-20 countered that the government had been working “tirelessly” on evacuations.

Germany said on Friday it was sending helicopters to help.

Russian President Vladimir Putin said other countries should not impose their own values. Beijing https://www.reuters.com/world/asia-pacific/senior-chinese-diplomat-says-afghanistan-should-not-be-geopolitical-battleground-2021-08-19, too, said the world should support, not pressure, Afghanistan.

The Taliban ruled with an iron fist from 1996-2001 before being toppled by U.S.-led forces for sheltering al Qaeda militants behind the Sept. 11 attacks.

However, they are seeking to present a more moderate face.

There are immediate fears for the economy, with foreign grants and aid set to slow, funds and assets trapped abroad and GDP predicted to slump. Hundreds of bureaucrats are unpaid for two months, a Taliban official said.

As Western leaders insisted the Taliban would be judged on actions not words, a Norwegian intelligence group said fighters had begun rounding up Afghans on a list https://www.reuters.com/world/asia-pacific/taliban-are-rounding-up-afghans-blacklist-private-intel-report-2021-08-19.

A U.S. lawmaker said the Taliban were using files from Afghanistan’s intelligence agency to identify Afghans who worked for the United States.

“They are methodically ramping up efforts to round those folks up,” said Representative Jason Crow, whose office has fielded over 1,000 evacuation requests from American-affiliated Afghans in the past four days.