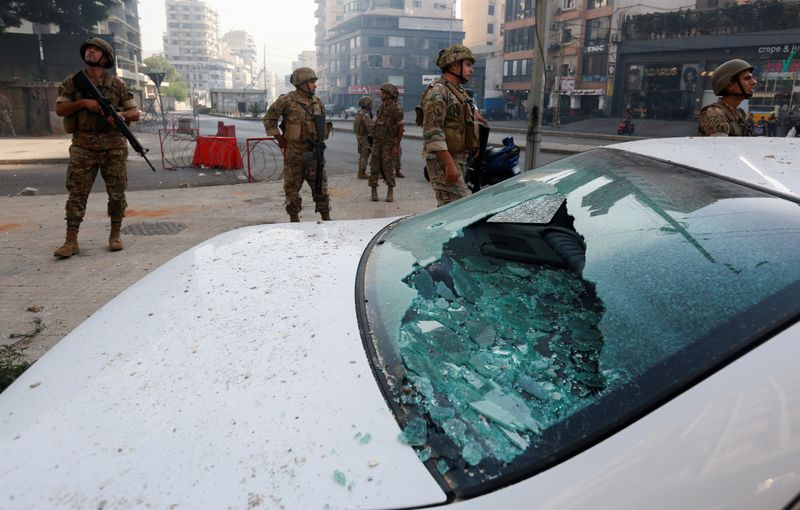 A damaged vehicle is pictured as soldiers are deployed after gunfire erupted in Beirut, Lebanon October 14, 2021. REUTERS/Aziz Taher

BEIRUT (Reuters) – At least six people were shot dead in Beirut on Thursday as demonstrations related to a probe into last year’s catastrophic port blast prompted the city’s worst civil violence in years.

The latest bloodshed adds to the woes of a country suffering one of the world’s worst ever economic meltdowns.

Here’s what you need to know about the Lebanon crises:

Thursday’s shooting erupted as protesters headed to a demonstration called by Hezbollah and its ally Amal to demand the removal of the judge investigating the port blast.

Political tensions have been building over the probe into the explosion, which killed more than 200 people and devastated swathes of Beirut.

The judge has sought to question a number of senior politicians and security officials, including Hezbollah allies, suspected of negligence that led to the explosion, which was caused by a huge quantity of ammonium nitrate.

All have denied wrongdoing.

The crisis over the probe is rooted in one of Lebanon’s main problems: sectarian politics that have divided Lebanese and fuelled civil conflict since independence. Shi’ites and Christians have lined up on opposite sides of this standoff.

Some of the most prominent suspects sought for questioning on suspicion of negligence are Shi’ite allies of the heavily armed, Iran-backed Shi’ite group Hezbollah.

Lead investigator Tarek Bitar issued an arrest warrant for one of them this week, Ali Hassan Khalil, a former finance minister who is the right-hand man of Shi’ite Parliament Speaker Nabih Berri, a close Hezbollah ally.

Bitar has also sought to question non-Shi’ite officials. These include the former prime minister Hassan Diab, a Sunni, a Christian general, and a senior Christian politician, Youssef Fenianous, a Hezbollah ally.

The issue is sensitive for the Christian parties partly because, while the port blast killed many Muslims, the bulk of the physical damage was in predominantly Christian areas.

The latest bloodshed takes place against the backdrop of one of the world’s sharpest economic depressions , which spiraled from the meltdown of its financial system in 2019.

The collapse, which has driven some three quarters of Lebanese into poverty and sunk the currency by 90%, was caused by decades of financial mismanagement and corruption by the sectarian elite.

The new government of Prime Minister Najib Mikati has vowed to revive negotiations with the IMF to secure a rescue package.

But Lebanon must first agree on the size of vast losses in the financial system and how they should be shared out – something the government, banks and central bank failed to do last year.

In the meantime, Lebanon’s collapse is driving ever more people to emigrate, in a braindrain across the sectarian spectrum which economists say will set back Lebanon for years.

Lebanon’s web of sectarian rivalries are complicated by foreign interests.

Lebanon’s power balance has been tilting in favour of Hezbollah and its allies for years, and away from factions that aligned themselves with Western governments and Sunni-led Gulf Arab states that have largely given up their Lebanese allies.

Hezbollah, which was founded by Iran’s Revolutionary Guards and has become more powerful than the state, views the probe as part of a U.S.-backed campaign to chip away at its influence and has accused Washington of meddling in the investigation to serve its anti-Hezbollah agenda.

Washington, which lists Hezbollah as a terrorist group, this week condemned what it called the group’s intimidation of the judiciary. France has also stood by the probe, saying it must take place in an independent and impartial manner.

While Saudi Arabia has turned away from its old Sunni Muslim Lebanese ally, Saad al-Hariri, it has good ties with militia commander Samir Geagea.