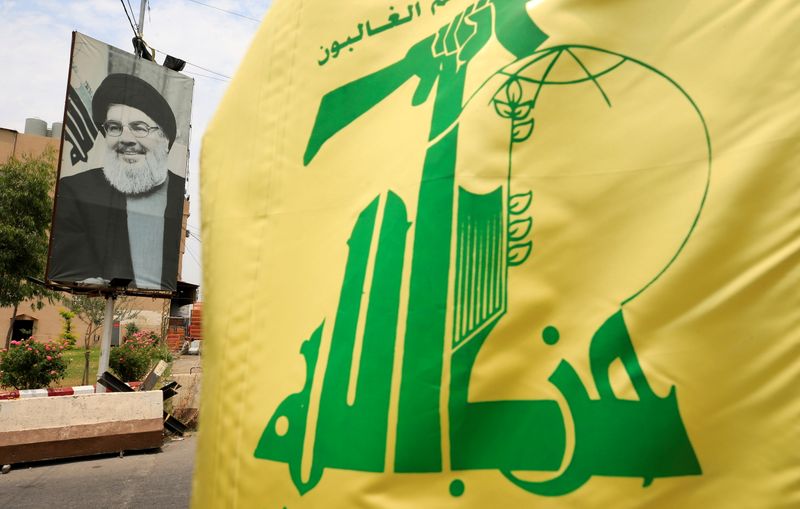 (Reuters) – The Lebanese Shi’ite group Hezbollah has worked hand in glove with Iran across the Middle East since it was established in 1982. Here’s what you need to know about one of the most important relationships in the Middle East today:

Iran’s Revolutionary Guards founded the group in 1982 to export its Islamic Revolution and to fight Israeli forces that invaded Lebanon that same year.

Classified by the United States and other Western countries as a terrorist organisation, Hezbollah has a powerful military wing that it has acknowledged is armed and financed by Iran.

The group also has a formidable intelligence apparatus and polices its own areas of south Beirut and southern Lebanon, as well as border areas with Syria.

One of Lebanon’s two dominant Shi’ite parties, Hezbollah has MPs in parliament and ministers in government. Its political clout grew in 2018 when, together with allies, it won a parliamentary majority.

Its commercial activities include a retail empire and a construction company. It also runs schools and clinics.

The group, which has grown to be more powerful than the Lebanese state over the last four decades, has largely been defined by conflict with Israel.

Hezbollah guerrillas forced Israel out of Lebanon in 2000 and fired 4,000 rockets into Israel in a 34-day war in 2006. Hezbollah has since rearmed into an even more powerful force.

The group has been accused of bomb attacks far from Lebanon.

Argentina blames Hezbollah and Iran for the 1994 bombing of a Jewish community center in Buenos Aires in which 85 people were killed and for an attack on the Israeli embassy in Buenos Aires in 1992 that killed 29 people. Both deny responsibility.

Bulgaria accused Hezbollah of carrying out a bomb attack that killed five Israeli tourists in the Black Sea city of Burgas in 2012. Hezbollah denied involvement.

HOW DOES HEZBOLLAH HELP IRAN IN THE REGION?

Hezbollah helps Iran to project power across the region. Its secretary general, Sayyed Hassan Nasrallah, is a leading figure in the Iran-led “Axis of Resistance”, which aims to counter Israel, the United States and its Arab allies.

Hezbollah’s close links to Iran were vividly illustrated when in 2013 it joined the war in Syria alongside Tehran in defence of their common ally President Bashar al-Assad.

In Iraq, Hezbollah has openly acknowledged it has supported paramilitary Shi’ite groups that are backed by Iran.

WHERE DOES LEBANON FIT IN?

Hezbollah has established Iran as a major player in Lebanon, a country where the United States, Russia, Syria and Saudi Arabia and many others have competed for influence for years.

Shadowy groups, which Lebanese security officials and Western intelligence say were linked to Hezbollah, carried out attacks that forced U.S. troops to withdraw from Lebanon in the early 1980s, including suicide attacks on Western embassies. Hezbollah has never confirmed or denied responsibility.

Hezbollah entered Lebanese politics more visibly after the killing of former Sunni Muslim Prime Minister Rafik al-Hariri and the withdrawal of Syrian troops from Lebanon in 2005.

A U.N.-backed court last year convicted a Hezbollah member of conspiring to kill Hariri, who was seen as a threat to Iranian and Syrian influence in Lebanon, although it found no evidence of direct involvement by the leadership of Hezbollah.

Hezbollah has denied any role in Hariri’s killing and has accused the tribunal of being a tool of its enemies in the United States and Israel.

As Hezbollah’s home base, Lebanon is vital to both the group and Iran. Hezbollah has used its political and – at times – its military clout to counter threats it sees from Lebanese rivals who say its vast arsenal has undermined the state.

In 2008, Hezbollah fighters took over Beirut during a power struggle with the then Saudi- and Western-backed government.

Most recently, it has led calls for the removal of the lead investigator in the Beirut port explosion, Judge Tarek Bitar, as he has pursued some of Hezbollah’s closest allies on suspicion of negligence, saying his probe was politicised and biased.