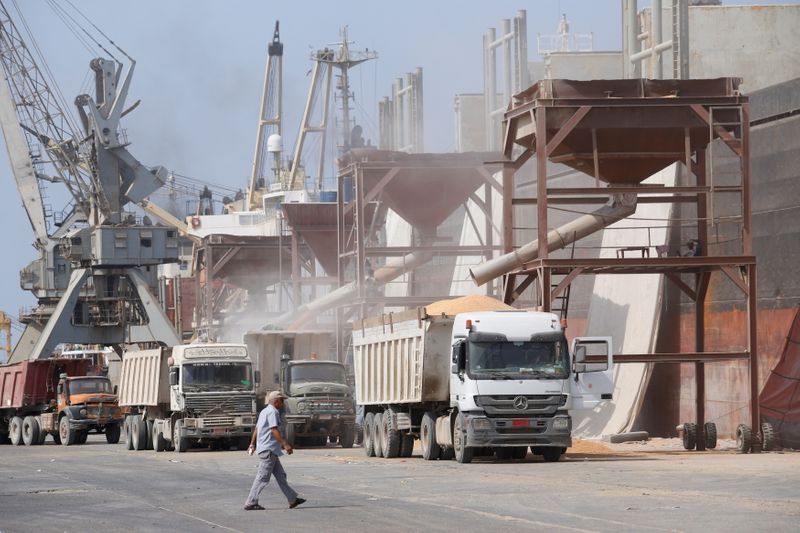 DUBAI (Reuters) – Saudi Arabia is seeking Washington’s help in bolstering its defences as it comes under intense U.S. pressure to end a blockade of Yemeni ports that its Houthi enemies say is an obstacle to ceasefire talks, two sources with knowledge of efforts to end the Yemen war and a U.S. official said.

A Saudi-led military coalition intervened in Yemen in 2015 after Houthi forces ousted the internationally recognised government from the capital, Sanaa.

Efforts to end a war that has killed tens of thousands of people and pushed Yemen to the brink of famine have stalled, with the Houthis saying the coalition must stop blocking ports and Sanaa airport before ceasefire talks can start.

The United States, Saudi Arabia’s main security ally, has been pressing the coalition to fully open access to the Houthi-held ports and the airport, and also pushed the Houthis to end offensives and engage in diplomacy.

A breakthrough would be a success for U.S. President Joe Biden, who has made ending the war a foreign policy priority, and ease tensions between Saudi Arabia and Iran — the conflict is widely seen a proxy war between the two regional powers.

But Riyadh first wants U.S. weapons to help the kingdom strengthen its defence systems following Houthi attacks on its territory with military drones and ballistic missiles, the sources familiar with discussions told Reuters.

“Publicly and privately, we’ve been putting a lot of attention on the port and the airport issue… It’s the right thing for Saudi Arabia to do,” a senior U.S. government official said on condition of anonymity.

The official said the defence of Saudi Arabia is a vital U.S. commitment and “something that the Saudis are specifically looking for”.

“I think what that boils down to is that there is a conversation between the U.S. and Saudi Arabia about how best to deliver on the president’s commitment to defend the kingdom, but not to provide offensive weapons for the Yemen conflict,” the official said.

Washington and Saudi Arabia, the world’s top oil exporter, are traditional allies, but ties have been strained since Biden became president.

Saudi authorities did not respond to requests for comment for this story. Saudi officials have said the kingdom can protect itself, despite attacks on its oil heartland in 2019 which Riyadh blamed on Iran, a charge Tehran denied.

The United States sent military reinforcements to Saudi Arabia’s Prince Sultan Air Base after that attack but began withdrawing them last year as part of a wider Middle East drawdown.

Worried about its security, Riyadh wants any lifting of the blockades in Yemen to be simultaneous with a ceasefire starting. The Houthis, who say they are fighting a corrupt system in Yemen, say the blockades must be lifted first.

The coalition sea blockades are enforced by warships that filter commercial ships already cleared by a U.N. mechanism to head to Houthi-held ports, including Hodeidah on the Red Sea, and Saudi Arabia controls Yemen’s airspace.

The blockades impede humanitarian relief efforts but the Saudi-led alliance says they are needed to prevent Houthi arms smuggling and accuses the group of using port revenues to finance its war effort, charges the Houthis deny.

Houthi chief negotiator Mohammed Abdulsalam told Reuters the group is ready to work with the Djibouti-based U.N. inspection mechanism UNVIM if the blockade is lifted.

A meeting this month between Sullivan and Prince Mohammed was described by one of the sources and an additional source in Riyadh as being “very difficult”.

The two sources with knowledge of the talks said U.N. officials had presented a new proposal, backed by Washington, that would — if agreed by the warring sides — resolve the question of Yemeni port revenues.

Under the proposal, management of the ports would be handed to the United Nations which would ensure revenues are used to pay public-sector wages in Yemen, they said.