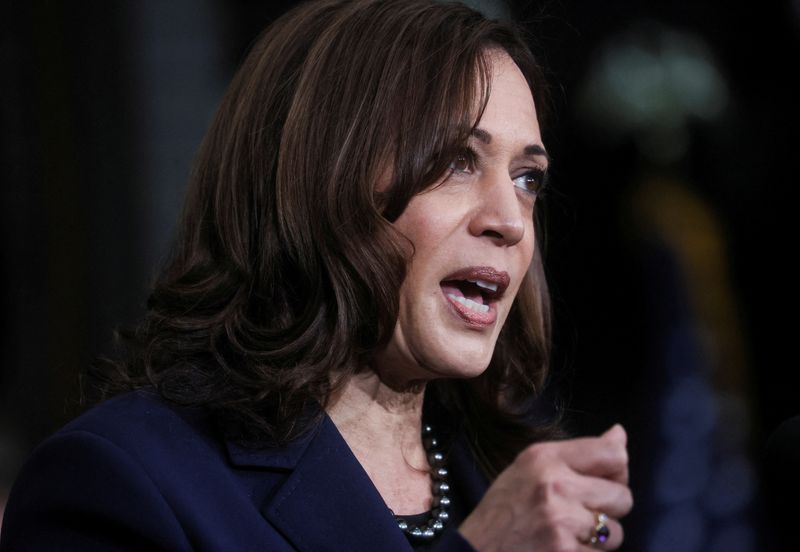 WASHINGTON (Reuters) – Kamala Harris will hold a series of in-person meetings with U.S. allies and partners at the Munich Security Conference next week seeking to deter Russian aggression in Ukraine, a trip that serves as a major diplomatic test of her vice presidency.

A senior administration official said Harris will deliver a speech, articulate U.S. policy at a number of public engagements and assert America’s commitment to its NATO allies. Leaders of Germany, the EU and NATO will attend and Harris is not expected to meet leaders from Russia and China.

The conference, launched by Western nations at the height of the Cold War to address military conflicts, is expected to take place on Feb 18-20 in Munich, amid a high-stakes conflict over Ukraine between Western nations and Russia.

“This trip is about engaging our allies and partners and building upon the intensive engagement that is already under way,” the official said.

Harris will “reaffirm America’s commitment to Ukraine’s sovereignty and territorial integrity” as it faces the threat of a large-scale invasion by Russia, the official said.

Russia has amassed some 100,000 troops near the Ukraine border. It denies planning an invasion but U.S. officials say an attack could occur within days or weeks.

In the early hours of Tuesday, President Vladimir Putin warned for the second time in a week that European countries would automatically be drawn into a war with Russia in which “there will be no winners” if Ukraine joined NATO and then tried to recapture the Crimean peninsula that Russia seized in 2014.

U.S. President Joe Biden has threatened to impose the most severe sanctions ever levied against Russia if it sends troops across the border, but emphasized the United States prefers diplomacy. He met German Chancellor Olaf Scholz on Monday and said the Nord Stream 2 gas pipeline would be halted if Russia invades Ukraine.

HARRIS’S OVERSEAS PUSH While Harris’s public appearance and effectiveness on a range of weighty issues at home has been heavily criticized, especially by the opposition Republican Party, on the global stage she is more often greeted as a trailblazer, the rare woman leader from the United States.

Biden has regularly urged his vice president to engage with foreign leaders directly and develop her own rapport with key U.S. partners, White House sources say, and the Munich trip is likely to be a major diplomatic test of her vice presidency and her highest-profile foreign trip yet.

“The vice president is starting to, more clearly and publicly, demonstrate how she is a key player in executing our foreign policy across the board,” the official said.

The vice president has sought to burnish her foreign policy credentials in solo calls with foreign leaders and in travel to Central America, Asia and Europe to advance administration priorities that include reducing migration from Central America into the United States and bolstering international support to counter China’s growing global influence.

The conference will gather around 35 heads of state and government at its traditional venue in the Bavarian capital. The meeting was held virtually in 2021 due to the COVID-19 pandemic.

Biden has attended the conference as a U.S. senator, as vice president and even while not in public office. Last year, he addressed the conference virtually and declared the era of Trump-style “America-first” diplomacy over.

(Reporting by Nandita Bose in Washington; Editing by Heather Timmons and Howard Goller)