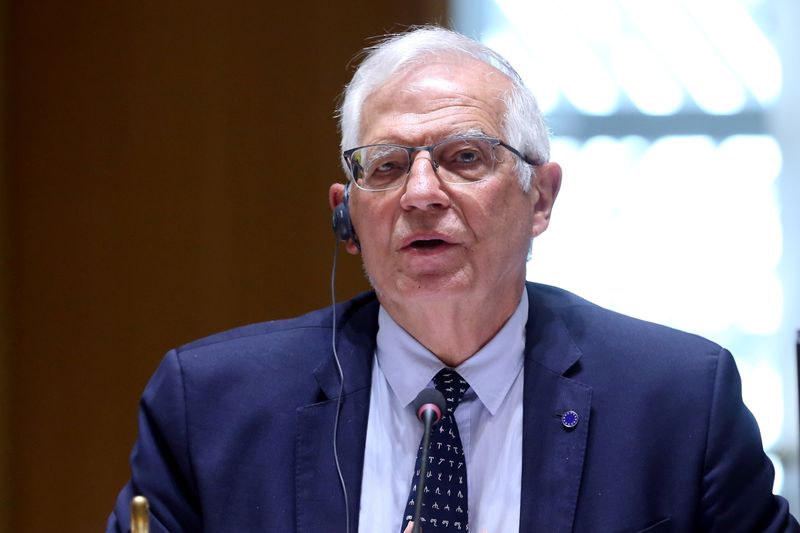 FILE PHOTO: European High Representative of the Union for Foreign Affairs Josep Borrell speaks during a meeting via video conference with EU foreign ministers at the European Council in Brussels, Belgium April 19, 2021. Francois Walschaerts/Pool via REUTERS

(Refiles to correct spelling of Borrell in headline)

BRUSSELS (Reuters) – Negotiations in Vienna between world powers and Iran are moving into a crucial stage and the next few weeks will be critical to saving their 2015 nuclear deal, the European Union’s top diplomat said on Monday.

U.S. officials returned to Vienna last week for a fourth round of indirect talks with Iran on how to resume compliance with the deal, which former U.S. President Donald Trump abandoned in 2018, prompting Iran to begin violating its limits on uranium enrichment about a year later.

“I am optimistic, there is a window of opportunity that will stay open for a couple of weeks, (until) end of the month,” EU foreign affairs chief Josep Borrell, who is chairing the talks, told a news conference in Brussels.

“But a lot of work is needed, time is limited and I hope that the negotiations will enter into a phase of nonstop (talks) in Vienna,” he said following a meeting of EU foreign ministers.

The crux of the 2015 agreement was that Iran committed to rein in its uranium enrichment program to make it harder to obtain the fissile material for a nuclear weapon, in return for relief from U.S., EU and U.N. sanctions.

German Foreign Minister Heiko Maas described the negotiations as tough and laborious, but added that all participants were conducting them in a constructive atmosphere.

“However, time is running out. We aim for the full restoration of the Iran nuclear deal as this is the only way to guarantee that Iran will not be able to come into possession of nuclear weapons,” Maas said in Brussels.