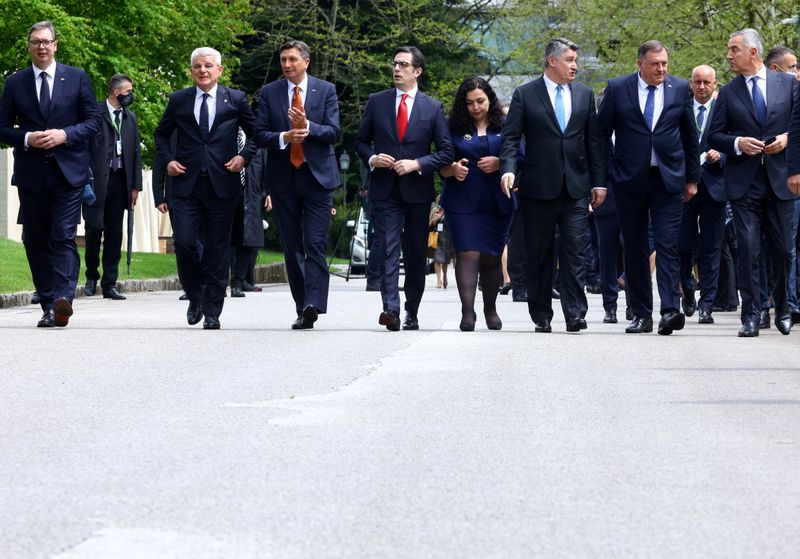 FILE PHOTO: President of Slovenia Borut Pahor walks next to his counterparts Zoran Milanovic of Croatia, Aleksandar Vucic of Serbia, Milo Djukanovic of Montenegro, Milorad Dodik, Sefik Dzaferovic, members of Bosnia and Herzegovina’s Presidency, Stevo Pendarovski of Macedonia, Vjosa Osmani-Sadriu of Kosovo, at a park during the 10th anniversary of the Brdo-Brijuni Process, in Brdo pri Kranju, Slovenia, May 17, 2021. REUTERS/Borut Zivulovic/File Photo

BRUSSELS (Reuters) – The European Union, fearing a political backlash in member states, can no longer agree to give a guarantee of future membership to the six Balkan countries once promised a place in the club, according to four diplomats and an internal document.

An impasse over a declaration for a summit of EU and Balkan leaders on Oct. 6 is a low point in the EU’s strategy to bring Serbia, Kosovo, Bosnia-Herzegovina, Montenegro, Albania and North Macedonia into the bloc. It coincides with a flare-up of tension at the Kosovo-Serbia border https://www.reuters.com/world/europe/nato-increases-patrols-near-kosovo-serbia-border-blockage-2021-09-27.

At the summit, the EU planned to restate its promise made 18 years ago to give “its unequivocal support for the European perspective of the Western Balkans,” according to a draft summit declaration dated Sept. 11 seen by Reuters. That has undergone at least two rounds of talks with no agreement, diplomats said.

EU states would not disclose their positions, but wealthy northern countries such as Denmark, France and the Netherlands fear a repeat of the rushed accession of Romania and Bulgaria in 2007 and the poorly managed migration of eastern European workers to Britain that turned many Britons against the EU.

Bulgaria is against North Macedonia joining because of a language dispute.

Even if some language is finally agreed, the malaise reflects paralysis in the EU’s plan to build a “ring of friends” from Ukraine to Tunisia by offering closer ties, trade and aid.

Instead, China https://www.reuters.com/article/us-china-silkroad-europe-montenegro-insi-idUSKBN1K60QX and Russia are encroaching with investments and influence. In January, Serbia was the first European country to receive Chinese COVID-19 vaccines for mass inoculation.

The EU is also indirectly exacerbating tensions in the region of 20 million people, diplomats say, because Balkan citizens https://www.reuters.com/world/europe/eus-balkan-strategy-losing-local-support-internal-paper-warns-2021-05-12 dreamed of joining the EU after the ethnic wars of the 1990s as Yugoslavia disintegrated.

NATO troops stepped up patrols in Kosovo on Monday near border crossings which have been blocked by local Serbs angered by a ban on cars with Serbian licence plates entering the country.

Serbia does not recognise Kosovo’s 2008 declaration of independence and has begun military manoeuvres near the border.

“They have to misbehave to be noticed,” said a senior EU diplomat in Brussels involved in Balkan policy. “There is deterioration in the Balkans that stems from the lost interest in EU capitals.”

The EU and the United States have appealed for calm and European Commission President Ursula von der Leyen began a three-day trip to the six Balkan countries on Tuesday to show the EU executive’s commitment to the region.

In her first stop in Albania, von der Leyen said she stood by the pledge that “Albania’s future is in the EU.”

But the EU’s credibility has been damaged, particularly after France and the Netherlands temporarily halted the enlargement process two years ago and Bulgaria is now blocking it.

Kosovo and Serbia feel let down by the United States, after being invited to the White House a year ago by then President Donald Trump to seal a deal to normalise economic relations, only to see it fall through. The EU has not kept its promise to allow Kosovo visa-free travel.

Pro-enlargement states, including Austria, Italy, Croatia, Slovenia and the Baltic countries, chide Germany and France for failing to press Bulgaria to lift its veto. Albania’s progress has also been halted because it is tied to North Macedonia in the enlargement process.

“As long as you have so many member states, for one reason or another, who believe that it is not right to extend the EU community further, then we are really going nowhere,” said John O’Brennan, an expert on EU integration at Maynooth University in Ireland.