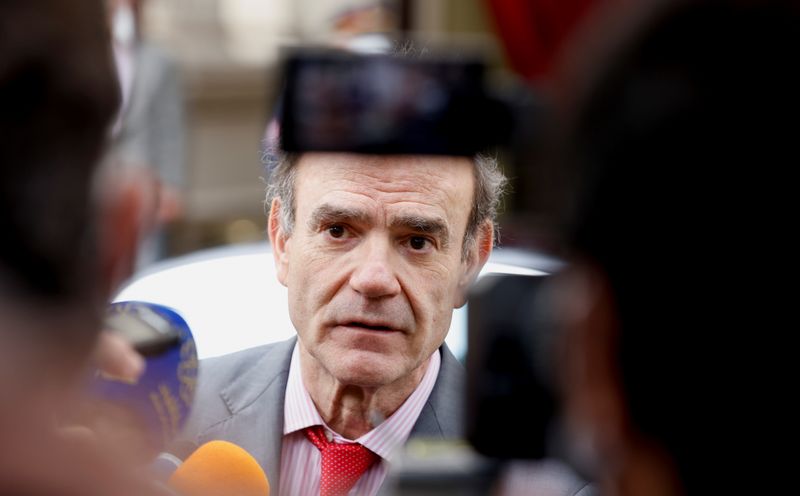 Deputy Secretary General of the European External Action Service (EEAS), Enrique Mora, speaks to the media outside a hotel, during a meeting of the JCPOA Joint Commission, in Vienna, Austria, May 19, 2021. REUTERS/Leonhard Foeger

By Francois Murphy and John Irish

VIENNA/PARIS (Reuters) – The EU official leading talks to revive Iran’s nuclear deal said on Wednesday he was confident a deal would be reached as the negotiations adjourned, although European diplomats said success was not guaranteed with very difficult issues remaining.

The talks resumed in Vienna on May 7 with the remaining parties to the deal – Iran, Russia, China, France, Britain and Germany – meeting in the basement of a luxury hotel, and the United States based in another hotel across the street.

Iran has refused to hold direct talks with the United States on how to resume compliance with the 2015 deal, which former President Donald Trump abandoned in 2018, prompting Tehran to begin violating its terms about a year later.

“I am quite sure that there will be a final agreement … I think we are on the right track and we will get an agreement,” Enrique Mora, who is coordinating indirect talks between Iran and the United States, told reporters at the end of a fourth round of negotiations.

Russia’s envoy, Mikhail Ulyanov, echoed those comments, saying on Twitter he hoped a final round expected to begin next week would be the last one.

The crux of the original agreement was that Iran committed to rein in its nuclear programme to make it harder to obtain the fissile material for a nuclear weapon in return for relief from U.S., EU and U.N. sanctions.

Senior diplomats from Britain, France and Germany (a grouping known as the E3) offered a note of caution, saying that while there was some tangible progress with the contours of a final deal emerging, success was not guaranteed.

“There are still some very difficult issues ahead. We do not underestimate the challenges that lay before us,” they said in a statement.

Mora said there was a common understanding on what was needed for a U.S. to return to the deal, lifting of related sanctions and the resumption of nuclear commitments by Iran.

“It can be said now that the framework and structure of the agreement has been defined and many clauses of the agreement are being negotiated,” Iran’s top nuclear negotiator, Abbas Araqchi, told Iranian state TV.

Officials have said they want to move ahead before Iran’s presidential election in mid-June, fearing the campaign could poison talks.

They have also had a soft deadline of May 21, when an agreement between Tehran and the IAEA, the U.N. nuclear watchdog, on continued monitoring of some Iranian nuclear activities is due to expire.

The E3 diplomats said it was critical that Iran allow the IAEA to continue its necessary monitoring and verification work and urged Tehran and the agency to find a way forward.

“IAEA access will of course be essential to our efforts to restore the JCPoA (Joint Comprehensive Plan of Action), as a deal cannot be implemented without it,” they said.