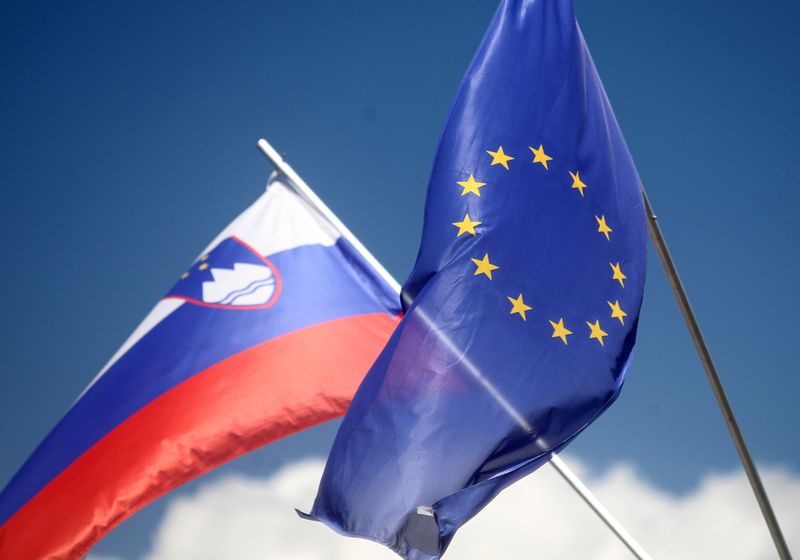 FILE PHOTO: The European and Slovenian flags flutter ahead of the start of Slovenia’s EU presidency in Medvode, Slovenia June 30, 2021. REUTERS/Srdjan Zivulovic/File Photo

LJUBLJANA (Reuters) – Amid high tension between east and west over democratic values, the European Union’s presidency passes on Thursday to Slovenia, led by a nationalist who has a history of crossing swords with the EU executive in debates over democracy.

Jansa, 62, is also close to Hungarian Prime Minister Viktor Orban, whose disagreements with western Europe came to an ill-tempered head at a summit last week over a law that bans schools from using materials seen as promoting homosexuality.

Slovenia’s priorities for its Presidency of the Council of the EU include bolstering Europe’s post-pandemic recovery, and its resilience, strategic autonomy and rule of law.

But its turn at the helm from July 1 – setting the agenda of inter-government meetings and representing the EU in some international forums – may also put a spotlight on the growing rift within the bloc over its common values.

In western capitals, the increasingly assertive coalition of eastern leaders is being watched with concern.

At last week’s summit, where Jansa and Poland’s prime minister were reportedly the only leaders to back Orban on Hungary’s anti-LGBT law, French President Emmanuel Macron spoke of a fundamental “East-West divide”.

“This is not a ‘Viktor Orban problem’ … This is a problem that goes deeper,” he said.

Jansa told reporters at the summit the LGBT debate was “a sincere exchange of views that, at times, got very heated” but calmed down once the facts were clarified. He said he did not think it would cause any unnecessary new divisions.

“Slovenia and many other countries do not want to be part of any new divisions in Europe. There were enough of those. We have joined the EU to become united, not divided,” he said.

Some academics believe an “Eastern European Union” is emerging based on positions that contradict fundamental EU values such as the rule of law, human rights, media freedom and LGBT rights.

“I think that the whole attitude of this alignment is very anti-European. It shows signs of an establishment of some sort of a new Iron Curtain,” said Marko Milosavljevic, a professor of journalism and media policy at the university of Ljubljana.

Jansa, who has also backed Poland in its battle with the EU’s ruling commission over Warsaw’s reforms of the judiciary, said the commission could sort out any problems that arose with any law in a member state.

“In the end, we always get a legally-binding decision that we must comply with,” he said at last week’s summit.

Its presidency will nevertheless focus minds on these issues, Riekeles said.

“This is something that the Slovenian presidency and Prime Minister Jansa have to take seriously,” he said. “In the context of the presidency, there is no avoiding of scrutiny on the issue of effective democratic rights, the respect of the rule of law.”

The EU executive, the European Commission, recently accused Poland, Hungary and Slovenia of undermining media freedoms, accusing Jansa of smearing a journalist who had reported on efforts to overhaul his country’s national press agency.

Jansa rejected accusations that he had bullied the reporter.