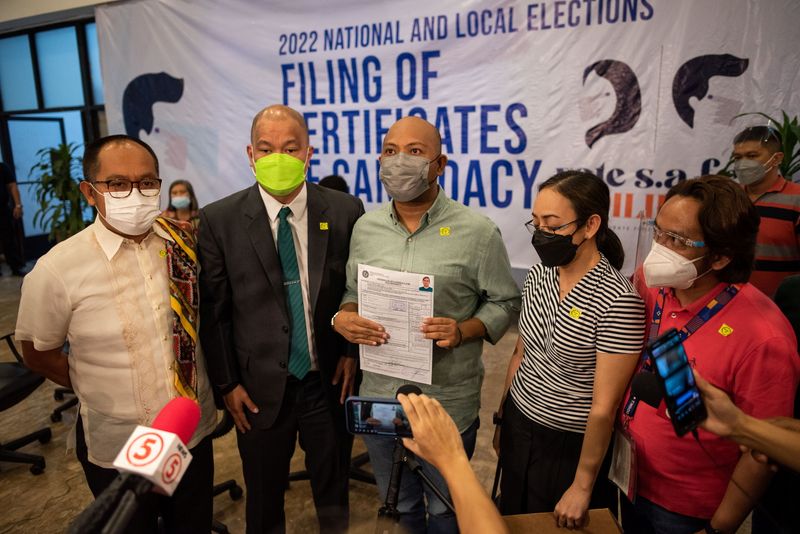 Representatives of Davao City Mayor Sara Duterte present to the media her certificate of candidacy for vice president for the 2022 national election, at the Commission on Elections, in Manila, Philippines, November 13, 2021. REUTERS/Lisa Marie David

MANILA (Reuters) – The daughter of Philippine leader Rodrigo Duterte filed her candidacy for the vice presidency, her spokesperson said on Saturday, ending months of speculation about her 2022 election plans.

Shortly after her candidacy papers were filed by a representative, the political party of Ferdinand Marcos Jr., the son and namesake of the late Philippine dictator who has registered to run for president, adopted Duterte-Carpio as its vice presidential choice.

Garcia-Frasco said Duterte-Carpio would be releasing a statement shortly.

Duterte-Carpio’s decision to seek the country’s No. 2 job came as a surprise as she has led opinion polls throughout this year as the preferred presidential candidate.

“It was a surprise,” Antonio La Vina, professor of law and politics at the Ateneo de Manila University told Reuters. “Next surprise is VP for whom.”

In the Philippines, president is elected separately from the vice president.

Duterte-Carpio’s 76-year-old father is barred by the Constitution from seeking a second six-year term. He said last month he was retiring from politics.

The Southeast Asian nation of 110 million people holds elections in May 2022 for positions from president down to governors, mayors and local officials.